Nintendo has announced the next games in the long running Pokemon series, Omega Ruby and Alpha Sapphire. 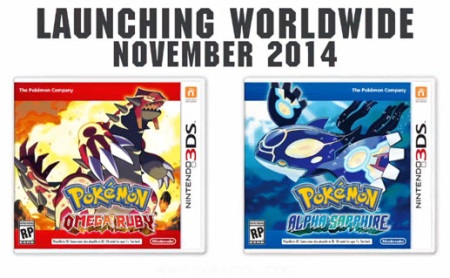 Pokemon titles generally come in three flavors.  There are the original issue pairs, which include such titles as Diamond and Pearl, Black and White, X and Y, and Ruby and Sapphire. These are the heart of the Pokemon franchise and what goes in here tends to find its way to the TV show and the trading card game.

Then there are the consolidation titles that take one of those pairs, put all the Pokemon that were exclusive to either, shake up the story a little bit, and then release as a new title.  Pokemon games such as Platinum, Emerald, and Yellow fall into that category.  Those used to be a staple of the years between new stories, though Game Freak, the Pokemon game developer, seems to have gotten itself tuned up to a point that it doesn’t need to do that sort of thing (in the case of X and Y) or can release a double pair of such games (as with Black 2 and White 2).

And then there are the remakes.

This is when they take an older version of the game, usually from one of the past Game Boy platforms, and remake the story with all the bells and whistles that the current state of the art allows.  There are only a couple of these so far, and they are easy to spot as they get compound names like FireRed and LeafGreen (remake of Red and Blue) or HeartGold and SoulSilver (remake of Gold and Silver).  While this might look like an opportunity for the company to slack a bit with a remake, Game Freak seems to go all out with the remakes and they end up being some of the best games in the series.  But I had the most fun playing HeartGold and SoulSilver, it being the peak of my Pokemon experience, so that might be my personal bias talking in large part.

Add in how good Pokemon X and Y look and play on the 3DS system, and I am quite looking forward to the first remake to come to the 3DS platform.  I will even let Nintendo slide on the hyperbole in the wee announcement video (30 seconds pretty much just to show us some box art).

It is actually and new take on a pre-existing epic adventure… for specific definitions of epic… along with what I hope will be a dramatic new rendering of the previously visited Hoenn region of the world of Pokemon.  But I still want to play.  Actually, I want to play all the more so because it is a remake.  I have a copy of Sapphire that I played thanks to the Game Boy Advance slot on the DS Lite (no longer part of the 3DS generation) but it definitely felt like playing the older generation hardware, where two buttons were considered sufficient, and I never finished it.

Information about the game… aside from that it is coming and obvious assumptions about the setting and story… are almost non-existent at this point.  But I am sure Nintendo will feed us details over the next few months to get us ready for the launch.

But even in the current information vacuum, Omega Ruby and Alpha Sapphire are on our list or games to play this fall.