Let’s talk about spam comments!  Won’t that be fun?

The ratio of spam comments to legitimate comments here has been pretty consistent over the years. 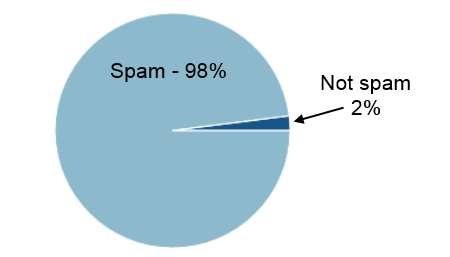 Yes, 98% of the comments that hit this blog are spam.  (But if 99% of everything is crap, what does that say about half of the legit comments?)  The numbers are ~26 thousand real comments to ~1.2 million spam comments.

When you read that number, 1.2 million, you probably feel sorry for me thinking that I somehow have filtered out all those spam comments on my own.  The mere thought of that  is probably enough to put someone off starting a blog.

But it is not that bad.

Comment spam here is filtered through a Akismet, a WordPress plugin, and it is pretty effective.  For me, comment spam comes in three flavors.

The first is spam that Akismet knows is spam.  I never see any of that.  It just gets disappeared, never to bother me.  Most of the time that represents 90% of the 98%.

The third is spam that completely gets past Akismet.  These end up in the moderation queue and I deal with them individually.  Over the life of the blog there have been 1,318 comments up for moderation which I have had to mark as spam myself.  Not bad out of 1.2 million I suppose.  Legitimate comments, usually in the moderation queue because it is a first time comment from somebody or because Bhagpuss has come up with a new way to spell his name, get cleared and posted to the blog.

And then there is the middle zone, the second flavor, the comments that Akismet believes to be spam, but not with enough certainty to just delete outright.  It keeps than for me in a spam queue so I can review it.  Legitimate comments do sometimes end up in there, 167 in total over the life of the blog.  This is why I try to go through this queue regularly rather than just emptying it.  Most of the time I could safely, but there is on occasion a real comment mixed in.  And there are usually only somewhere between 5 and 30 comments in this queue on any given day, so it is no big deal.

However, for about the last three weeks there had been a change in the balance.  According to Akismet’s stats, there was a big spike in spam in May, but that was because April was unusually low in spam comments.  Otherwise May hasn’t been that out of line with the three months before that for total spam.  And there were months in 2013 that saw as much as three-fold greater numbers of spam comments.

But the spammers must have been re-arming with something new for May, because the middle zone, the spam comment that gets queued up so I can review it has gone up dramatically.  Just today there were 600+ in the queue for me when I got up this morning, and less than eight hours later there are 700+ lurking in the queue.  And I do not appear to be alone in seeing this.

Given the total spam numbers Akismet is showing for May, it appears to be literally putting all spam in the queue for review.

So I have had to change my review process for the time being to just search on the names of a couple of people who comment regularly, but whom get stuck in the spam queue for reasons unknown, and dumping the rest of the queue sight unseen.  And even that has problems.  WordPress craps out about half the time when trying to dump more than a couple hundred spam comments from the queue.  It is annoying.

Anyway, that has been the administrative fun time here this month.  If I missed a comment of yours in the spam queue accidentally, I apologize.

I celebrated the five year anniversary of a blog.  No, not this one.

EVE Online turned 10 (I even made a movie) and reminded us of its true nature, while DUST 514 finally went live for real.

Somebody was saying that there had only ever been two successful MMOs, EverQuest and World of Warcraft.

I checked up on the Newbie Blogger Initiative to see who survived their first year of blogging.

Camelot Unchained made its Kickstarter goal one day before their campaign ended.   Success at the last minute is still success.

The project code named Titan was rumored to have been pushed out to 2016.  Meanwhile Activision-Blizzard announced that WoW had shed 1.3 million subscribers, dropping to 8.3 million total.  And then there was the problems with the Diablo III economy.  Rough times.

The XBox One was announced.  Or the name was.  I didn’t like it.

I made a chart about the relative natures of MMO economies.  I was also musing about dangerous travel.

We were starting to peek into NeverWinter as a possible game for the instance group, in hopes that we might have a hiatus from our long hiatus.  We also played a bit of Need for Speed: World.

Rift, ostensibly the game the instance group was playing (and which I was still playing a bit of), announced it was going free to play, which made me mutter about revenue models again.

Our EVE Online corp decided to go play some Lord of the Rings Online, and so my relationship with Middle-earth continued and I was quickly in the Lone Lands.

And finally, I wrote a bit about the first computer game I ever played, which lead to some charts about my video gaming timeline.

I was able to expose the true conspiracy behind the EuroGamer Darkfall review.  Powerful forces have been suppressing this story ever since.

Meanwhile, EverQuest was celebrating its 10 year anniversary by putting up a new server.  Polled on what it should be, people chose the 51/50 rule set.  I’m sure that, somehow, that say something about MMOs and nostalgia.  And did anybody go play on that new server?  How did it work out?

I went back and played some Blizzard classics, Diablo II and StarCraft, both of which have patches now that mean you do not need the CD to play.  This was prompted by Blizzard’s pushing people towards Battle.net and the announcement of the opt-in for the StarCraft II beta.  I opted in right away.  I hear that some people got in to the beta almost a year later. *cough*

In New Eden, it was new ship time, as I picked up both an Orca and a Buzzard.  I also managed to lose my Cerebus.   Oops.

And speaking of EVE Online, it was a year ago that I announced my one year experiment, EVE Online Pictures.  That site is now six years old.

The instance group was moving along slowly.  We did hit Azjol Nerub, but vacations and such kept us down to four people, so we spent a bit of time back in Burning Crusade doing heroics and generally messing around.  That included our run into Ogrimmar to do Ragefire Chasm.

Playboy’s “Massively Casual Online Game” Playboy Manager was announced.  The game was supposed to launch in the summer of 2009 according to the press release.  The site for the game was still there (go Google it, not sure if it is still around) but it still mentions signing up for beta invites.  Casual might refer to the development plan I guess.

The following blogs have linked this site in their blogroll, for which they have my thanks.

Please take a moment to visit them in return.

Most Viewed Posts in May

did blizzard cancel warlords of draenor?
[No, it is just in a timeline far, far away.]

bio break
[How does that even get you here? It should get you there. Wait, are you using Bing?]

gratuitous linkage
[We love nothing more around here!]

The multiplayer game of Civ V, now on the big map, continues forward.  The couple hours a week that the group plays tends to whet the appetite rather than sate it, so I have been playing more Civ V during the rest of the week.  Single player matches do not really lend themselves to a blog narrative though.  What would I say?  The AI is erratic, the game is bloated and slow, and while I like the game, the way certain mechanics like happiness were handled this time around annoy me.  I think Civ II still might be my favorite.

Lack of a war in null sec would seem to mean lack of things to do… or at least a lack of things to do that  I enjoy.  I enjoy operations that have a mission, a goal.  Sitting on a gate to gank random passers by seems dull by comparison.  Just me, I know.  Lots of people enjoy gate ganks.  Fortunately, there has been no shortage of nightly ops of late, generally to clean up bits of null sec in our area of influence that were infested by NPC null sec players while we were away in the south.  That may eventually wind down though, and then what will happen?  If there is nothing, then boredom will prompt an implosion or two.  That alone can lead to war.

I actually downloaded this and played through the starter zone.  I got up to level 11 and to the next planet.  And then I sort of stopped.  I still log in a bit, but I do not find the game very compelling.  I do not come home aching to log in.  Rather, I log in after I have played some WoW and when there is no op current for EVE.  It isn’t bad, I just don’t find it very engaging as yet, though I have to admit the obligatory voice acting for every quest does wear me down some, even when I space-bar skip through them.  I will give them points for using in-game art assets for that, but the animations look awkward and wooden when used for long stretches of dialog.

I have been playing a bit more WoW this month, though mostly solo.  The instance group is heading towards its usual summer hiatus with people going on vacation.  The patch update that brought in more levels for gear got me to get out my level 90 hunter and return to Timeless Isle.  That has been fun.  And the current “double your valor points” buff has a lot of people out and playing.  And it looks like “scenarios with level 90 alts” might be part of the summer plan.  We shall see.  It is still a long way to Draenor from here.

The WildStar head start launched at some point this morning.  Good luck to those who were there for the first moments of the live game.  The timing for the launch seems just about perfect.  It is still month from Warlords of Draenor but just in time to catch those disillusioned with The Elder Scrolls Online.

The Newbie Blogger Initiative new blogger campaign for 2014 is wrapping up.  I barely contributed anything, though I had one more half-done post on the topic of blogging.  I will probably save that for next year.  I will have to post a list of the class of 2014 tomorrow, if I can find a definitive listing, to help spread the word.

I should finish up the Pokemon Y story line… tomorrow.  I tend to play on Sunday afternoon.  Then I will write up what I thought about it.  Lots of good new things, though a few mixed blessings in the bunch.

And somewhere in the not too distant future looms a Steam Summer Sale.  What else could I possibly need though?