Bung was back from LEGOLand and Earl was back from the wilds of Canada and we were all together again on Saturday night.  We had already done Temple of the Jade Serpent and Stormstout Brewery, so the next instance on the list looked to be Mogu’shan Palace.

As an instance it is rated for level 87 and up, and our group was a bit shy of that.  Our lineup at the beginning of the evening:

Only two of us were 87, but we figured that was close enough.  Sure, we couldn’t use the Dungeon Finder, but that was never our plan in any case.  We would follow the grand old tradition of “screw Dungeon Finder, we’ll just walk there and do it below the recommended level!”  After all, what is the worst that could happen?  Maybe the quest giver won’t give us the quests.

But, as it turned out, Skronk already had us covered on that front.  Actually, we have enough level 90 alts in the group that we could have done it without Skronk’s setup, but it felt better that he was in the zone already.  He had managed to sneak into the zone in tow behind Ula’s level 90 alt and so had already set his stone to the alliance hub at the Shrine of Seven Stars, gotten the flight point, and scouted out the summoning stone for Mogu’shan Palace.

He did need somebody else to help him summon the rest of the party, so I swapped out for one of my level 90s and we commenced to summon. 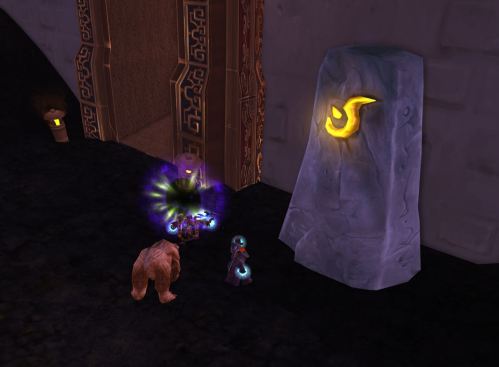 At the Mogu’shan Palace stone

One everybody else was there, I logged out, re-joined the group as Alioto, and was summoned as well.

Once we were all there, we took a minute to run over to the Shrine of Seven Stars so everybody could get the flight point and set their hearthstones there if the so desired.

At the Shrine of Seven Stars

I pointed out that the Shrine of Seven Stars had almost everything one could want, banking services, vendors, daily quests, portals to all the other major locations, and so on.  The only thing it lacks is an auction house NPC.  Well, it has one, but only for those who follow the engineer’s trade.  Otherwise you have to head back to Dalaran or Stormwind for an auction house.

Anyway, once we got ourselves set there, it was back over to the Mogu’shan Palace, where we stood before the instance portal.

It was time to go in!

I stood back, taking a screen shot as the rest of the group headed towards the instance.  Earl and Ula disappeared into the palace, but Skronk and Bung seemed to be having problems.  I ran forward and tried to enter the instance and discovered what the issue was.

Blizzard level locked the instance, which, if you ask me, is just dumb.

I can see locking us out through Dungeon Finder, because that might impact other players.  I can even see putting a lower limit on Heroic Mode instances.  But players have always been able to enter normal mode dungeon as far as I can recall.  In fact, I am pretty sure I can find an occasion where we did that at least once if I go through all of the instance group posts.  Since the instance post count exceeds 260 at this point, so I’ll save that for another day.

But there we stood, with three of us unable to enter the instance.  Those of us at level 86 still had between a quarter to a half of a level left to go before 87, with Alioto being the furthest behind.  So it looked like we would have a leveling up night.  And the easiest way to do that seemed to be tackling the first two instances in Pandaria again, so off we went.  We blew through them both last time, so this time should be no problem.  Dungeon Finder, take us away! 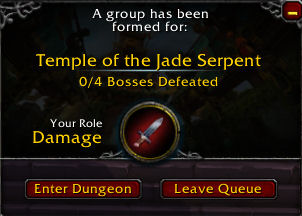 The first up was the Temple of the Jade Serpent, which is an amusing if quick instance.

Giant fish in a bubble

We moved through fairly quickly.  I couldn’t really recall any of the boss mechanics until they happened during the fights, but we seemed to get through to the final boss, the Sha of Doubt.

The Sha of Doubt’s big thing is summoning shadow versions of each of the group at various points throughout the fight.  We did a good job of burning those down in the right order, starting with the one on the Skronk, the healer.  And then we were done.  Experience bars had been advanced a bit.  There was a gear upgrade or two.  But three of us were still level 86, so it was time to go to the next repeat dungeon, Stormstout Brewery. 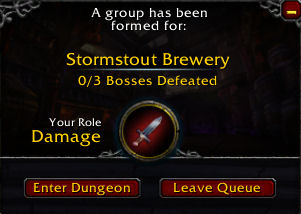 Another dungeon with its own quirky storyline, this time focused on beer. 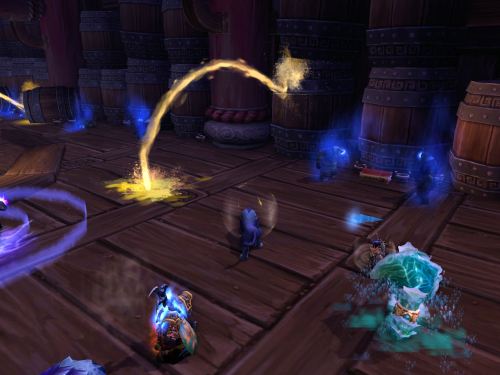 No, really, it is beer

We got through Ook-ook and his monkey innuendo fairly quickly and managed to avoid locking anybody out of the fight with Hoptallus the giant rodent, so were able to roll up to the fight with Yan-Zhu the Uncasked in fairly short order.  We even got through the opening floor show without much problem. 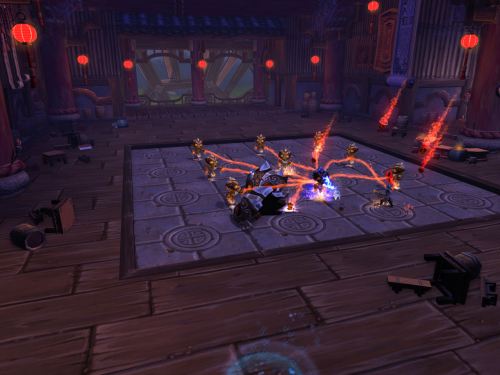 Start of with some appetizers before the main course

I did manage to die during the first encounter due to my own foolishness, but there is a break between fights where the group isn’t in combat so Skronk was able to bring me back from the dead.

Then, finally, Yan-Zhu was up.  We had trouble with this fight the last time around, so we started saying aloud what we recalled, which largely involved bubbles.  We repeated “when the bubbles show up, get in the bubbles.”  And then we died to a wave of beer. 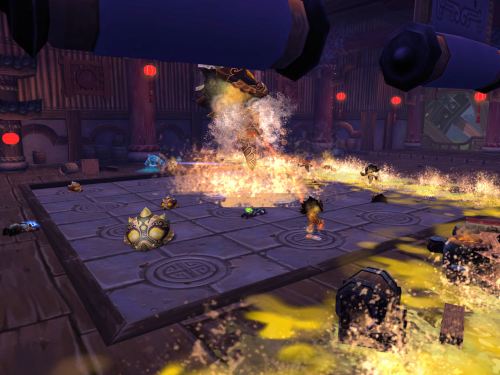 Sure, what a way to go, but it certainly caught us by surprise.  Apparently the Yan-Zhu fight has some variations, and we were so fixated on the bubble thing from last time that we just sat there and let the wave kill us.  Skronk used the soul stone mid-fight, so when we did wipe, we had to release and run back to the instance.  Fortunately, you come back close to the entrance and, when you re-enter, it puts you fairly close to the final boss fight, though the actual zone-in point can be a little startling the first time you drop in. 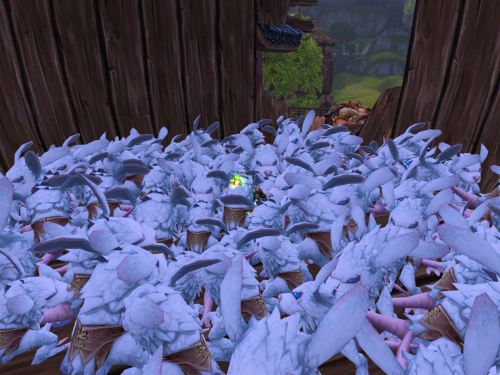 The second run through we did discover that we had been given a buff that would let us jump up and over the waves of beer as they swept the field of combat.  There was just a matter of timing that needed to be dealt with, which we failed on.

After that there was much talk about getting to the intersection of the X,Y axis, as the beer come at the group in two perpendicular waves, and timing jumps and where to stand, much of which was thinking out loud.  We basically ended up with

The melee guys sometimes cannot see the waves if they form behind them, so we needed to make sure everybody knew when a wave was coming.

This let us actually get through the fight and bring down Yan-Zhu, but still left two of us at level 86, Skronk having leveled up during that run.  So we decided to give the Dungeon Finder one more run.  This time Skronk selected “random” for us and hit the button.

And we got Stormstout Brewery again.

As before, we ran through, got to the final boss room did the preliminaries, then readied ourselves for the final fight.  Since we were all warmed up for the beer waves, this time we got the carbonation bubbles version.  But we knew the routine there nearly as well.  You just get in a bubble when they appear and get up away from the ground.  We were thus able to take down Yan-Zhu on the first try. 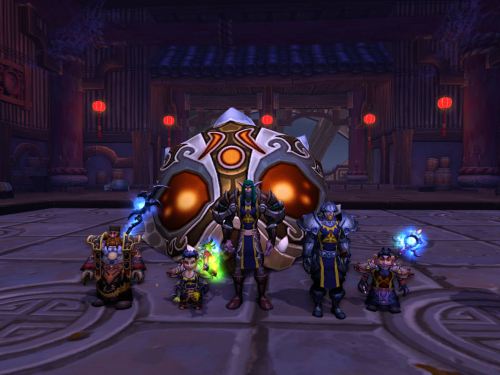 That run got Bung up to 87 and left Alioto just shy of a level.  We decided to call it a night there, and I ran Alioto out to the Kun-Lai Summit zone to see if I could pick up the quest chain that leads to the 24 slot bag.  However, I quickly found that the quests in the zone are for levels 87 and above only.  Locked out again.

So I headed back to the Valley of the Four Winds.  A couple of quests there got me to 87.  Now we are all set for the Mogu’shan Palace next time.

1 thought on “Looking into the Mogu’shan Palace”