Back in the mid-to-late 90s, back when I was playing TorilMUD, there was a point when a couple of people had been caught cheating… multi-boxing or exploiting game mechanics or some such… and the game had to come up with punishments for such transgressions.

The people who ran the at the time came up with a few levels of action, which included deletion of characters and banning people permanently.  But the for the first offense rumor had it… rumor, because while the staff had policies about this sort of thing, they were not documented for the player base, but the whole community was small enough that word got around about nearly everything if you knew who to ask… that the punishment involved a choice.

And, of course, as we sat around in experience groups chatting about this and that while waiting for the zone to respawn, this topic came up and we declared which choice we would take.  Universally we opted for losing levels.  In fact, in exploring this topic, I think we were in favor of being busted down to level 1 if we were allowed to keep out gear. 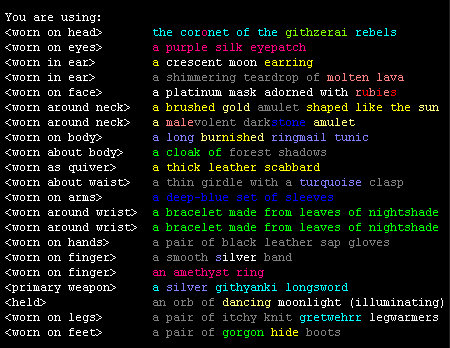 Levels were replaceable, and in a game where there was experience loss on death… and level loss with enough deaths was a thing back then… working on experience and leveling up often continued for players at level cap.  We had all been through the leveling process.  We knew the ins and outs and could find groups.  Leveling up was work, but work we knew how to do.

Gear though… gear was a different story.  This was a time where gear commonly had class, race, or alignment restrictions, but level restrictions were almost unheard of.  And there was not such thing as attunement.  A rare item might be flagged as “no trade, and some items were “cursed,” which meant you could not drop them without somebody casting a spell on you, but most items could be traded to other players or handed off to low level alts.

Plus gear often made your character… or made you character viable.  If you had knocked my level 50 warrior back down to level 1 but left him with his gear, he would have torn his way back to level 40 in very little time solo.  While being able to solo was generally over by level 20 for a fresh character, and alt with good gear could easily go to 40 and possibly to the level cap at 50 with the right outfit.

Obtaining gear though… that was the hard part.

As I mentioned in a previous post, gear was available once per server boot.  If you wanted an item from a particular mob and somebody else had already killed it during the current boot, you would have to wait until the server crashed and restarted again. (Or until a kindly GM decided that the server had been up long enough and we needed a reboot to keep us all busy.)

While a good proportion of items were on a given mob every single time, some were random.  Of course, the better the item, the more likely it was to be random.

Then, to obtain the best items, you had to run zones, the TorilMUD version of raiding.  That meant getting together a group of 16 people of the right mix of classes, getting yourself included in that group, and spending anywhere from 1-8 hours taking down a zone. (No zone, to my recollection, took beyond 2 hours if done right, but mistakes happen.  I recall a City of Brass group that took 4 hours just getting to the zone because things went horribly wrong in the Plane of Fire.)

And, finally, once you had completed a given zone, you had to roll on items.  People would put in bids on a given item, numbers would be assigned to people, and a random roll would be done to determine who got the prized item.  So you could get in a group, go through a successful run, and still end up empty handed and waiting for a reboot so you could try again.

Of course, this doesn’t sound all that strange today.  Sure, bind of pick up, gear attunement, and level restrictions on gear have axed the whole twinking of alts to a certain degree.  But gear still rules, and there are still some twinking options, like heirloom gear in World of Warcraft.  Rare is the MMORPG where gear is not a major focus.  Sure, there is reputation, titles, mounts, pets, achievements and what have you, but gear does seem to drive people more than anything else.  I went to Timeless Isle not so much because I needed something new to do but because it was an efficient way to gear up at level cap.  I am past wanting to commit to raiding, but I still will seek out the best gear I can. 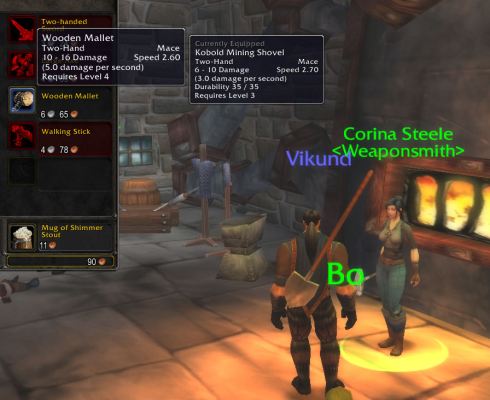 And what happens when an MMORPG doesn’t focus so much on gear?  We seem to bring our gear orientation with us all the same.  Darkfall didn’t specifically de-emphasize gear, but with full loot of PvP victims in place, people sought to protect their good gear by going out to battle in cheap drops.

Likewise, one of the main fears people have in EVE Online centers around loss.  People with a gear orientation coming into New Eden can be quite discouraged by the fact that when your ship explodes it is gone and you have to buy a new one.  The can often, abstractly, see the benefit of such a system.  Destruction of ships drives the market, makes industry viable, and basically keeps the player economy going despite the game being full of magic sources of in-game currency like most other MMOs.

And I must admit to letting out a resigned sigh when my own ship gets blown up.  I’ve gotten past attachment to individual ships.  You can always buy another just like it.  And the ISK thing isn’t a big deal, especially when you are eligible for reimbursement.  But actually getting a ship together if you don’t have a backup can be a pain.  If their aren’t some on contract, you end up having to head to a trade hub, buying what you need, and then shipping it to where you want to use it.  Again, an economic opportunity for some… shipping corps are a thing in EVE… but a bit of a pain if you want to do something but, instead, have to clone jump and spend a day in high sec buying parts and arranging transport.  That is just the way it works when you need a specific ship with just the right fit.

Because it all comes down to an obsession with gear in the end.

5 thoughts on “A Long History of Gear Obsession”