Am I trolling too hard with that headline?

Anyway, everybody was back in town and ready to go last week.  Mattman even had a few a few pictures to share in an attempt to convince us he had actually been in Hawaii, and which gave me the in for my choice of titles. 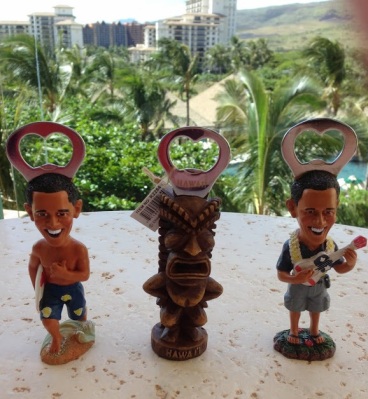 The utility president, it’s all Ku

Mattman claims that the hotel in the background is some place near Waikiki, though staring at it long enough I have half convinced myself that the former U.S. embassy in Saigon is visible.  Still, probably nicer than East Timor.  And I don’t think I have seen the President looking that happy in quite some time.

So we were online, logged into Steam, and in Civ V for our first turn, and it was an epic first turn.  But I expected that it might be.  Both Loghound and Mattman had to figure out what the AI had done to their empires.

For Loghound, who had only missed a week,  it was not too big of an effort to get his empire turned around.  He was a bit miffed that the AI had basically put down a mine on every hill it could find, turning great swathes of his countryside into an industrialize mess. 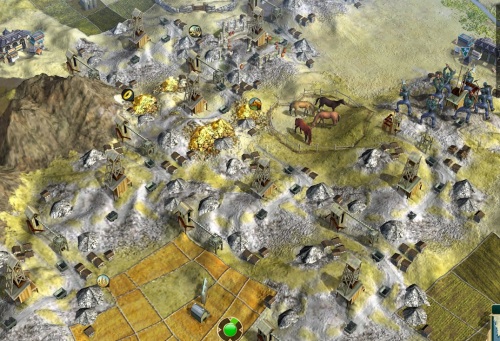 Mining blight in the golden hills

But otherwise he was able to get things back on track.

Mattman though… Mattman had been gone for three weeks, giving the AI plenty of time to work its magic.

Mattman needed a good chunk of the “now up to 22 minutes” turn timer that first turn.

By his account, the AI managed to run his empire into the ground financially, running at a deficit each turn.  Unhappiness was running to 10, further crippling his empire and causing revolts to spring up.  Meanwhile, the AI had been maintaining a large and somewhat useless navy, as the AI is wont to do, which it had parked in a far corner of the world to defend the polar ice cap.

So some of us took the opportunity to get a snack or a beverage while Mattman tried to stop the bleeding and otherwise save the patient.  We offered up some luxury good trade deals to help him out.  I couldn’t get a deal going where I just gave him pearls, of which I have an excess, so I did an open boarders deal with him and threw the pearls in with the mix. Eventually he got things in motion and we were able to leave turn 581 behind us.  But he was having problems with uprisings, so I offered to send some troops his way since we had the open boarders thing going.

Unfortunately, even in 1965 it takes years to get a regiment of lancers across the ocean, so by the time my lead unit made it there (many turns down the road) the uprisings had been dealt with.  So I used that as an opportunity to tour China. 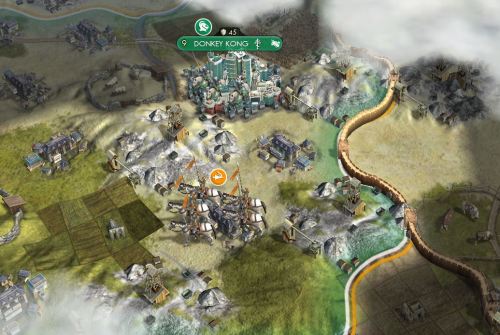 Who could be unhappy in Donkey Kong?

In what must have been something of a slap in the face for the Chinese empire, you can see the Great Wall on their border.  The Assyrians built it.  They built it to keep the Chinese out.  Wasn’t that a kick in the chow fun?

I diverted a couple other units I had on my way to help him out to what I called Barbarian Island.  It was basically an island overrun by barbarians.  I landed some infantry and a Gatling gun unit there. 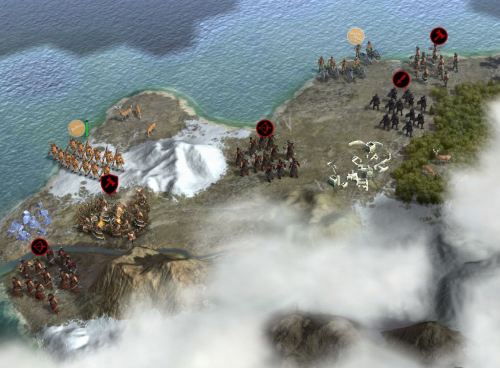 One of the things Sid Meier has fixed over the years is the need for disparity between modern and bronze age troops.  There was a time, back in Civ II, when spearmen could stand up to such things.  Now though, my modern troops cut down the natives wholesale.  The Gatling guns blazed, cutting down any barbarians unlucky enough to get within range, and took almost no damage from their fruitless attacks.  It was a nice way to level up a couple units and earn a few culture points.

While I was engaged in that, Mattman did get his happiness problem sorted out, and once his empire was again not set to crash and burn, he decided that he didn’t want autocracy as an ideology, despite the Chinese people demanding it last round.  However, you can only change ideology when your population is unhappy, and he had solved that problem.  So he spent a couple of turns trying and failing to get his empire back to a state of unhappiness without doing anything drastic.  It wasn’t happening though.  He had fixed his problems too well, so resigned himself to autocracy.

He reviewed the options when it came time to choose and I think was swayed by the fact that it would help with his campaign against the Russians as well as by the way it solved my own unhappiness issues.  Since autocracy is essentially 20th century fascism, I am not sure what message that is really sending.  The masses love them a good dictator?  Anyway, he celebrated by taking Moscow. 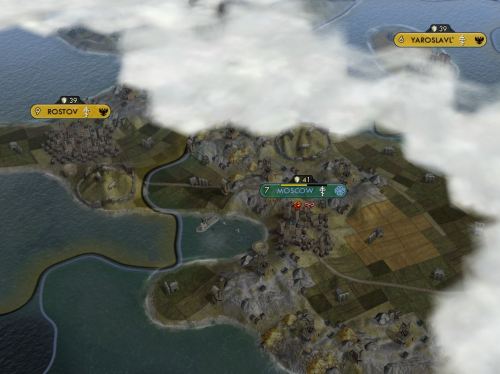 Moscow falls to the Celtic hordes

Back in the part of the world where Brazil and the Dutch co-existed, Potshot proposed up a city trading deal.  Since we had each conquered half of the Moroccan empire, some consolidation seemed in order.  He offered up Fes and Rabat for two former Spanish cities which I had taken as part of our attack on Isabella.  That would keep our empires from being mixed together and it would keep the map tidy.

I had actually been considering such a trade myself, though I was going to hold out until we had taken down the Aztecs.  But I wanted Rabat and Fes, so went along. 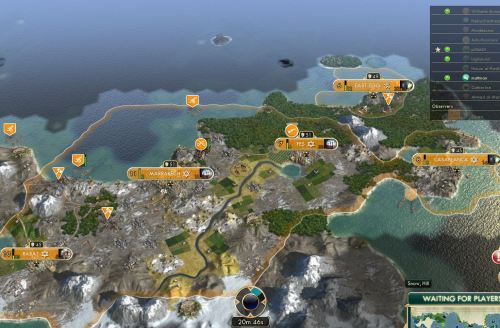 Former Morocco is all Dutch now

That is the sort of deal you can rarely get the AI to work out with you.

However, in the short term is was a bit of a muddle.  I traded two very developed and productive cities for two newly captured and under developed one.  Furthermore, you still get unrest in such a trade, and while my happiness was high enough for that not to be an issue, it did have an impact on my gold supply, putting me in a budget deficit each turn.  Plus, I essentially let Potshot push his borders just that much closer to my capital city.  That may come back to haunt me in any future showdown.

But the map looks nice!  And there wasn’t any problem that wasn’t solvable in the longer term.  In the short term though, the Aztecs, who we were lining up to attack eventually, used this bit of unrest to launch their own offensive.  Montezuma seemed obsessed with Potshot’s city on his continent.  Sao Paolo was an affront to the Aztec nation, so Montezuma declared war and, this time, managed to throw enough weight at the city to take it.

And then, in something of a surprise move, he razed the city, destroying it. 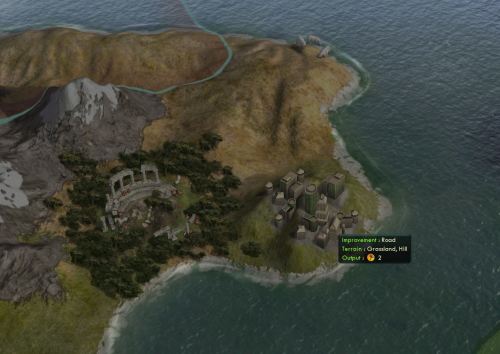 The former location of Sao Paolo

Potshot was thrown back across the straights and asked for peace before I could get an army lined up and over to support him.

We then commenced our build up for an attack on the Aztecs.  I already had troops in motion and there was a nice little corner of the Aztec’s continent with a city state and some as yet unclaimed land.  I abused the city state of Zurich a bit, pouring some troops across their lands.  I tried to buy friendship first, but it was clear that the Aztecs (and Potshot) were throwing money at them already, so I avoided that bidding war.  Potshot also got troops and a large navy in place.  We were just waiting for his peace treaty with the Aztec to expire.  Once that happened, we both declared war, something which my military advisor appeared to approve of. 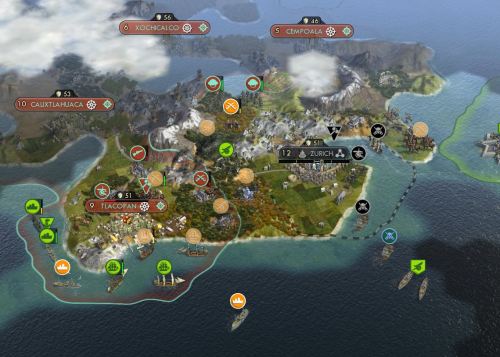 The siege of Tlacopan

The AI was a bit wily in this, and actually managed to forestall the fall of Tlacopan for a while by managing to kill off the few units we had on hand that could actually assault and capture a city.  I had gone heavy on artillery and had neglected the assault troops.  But I managed to bring some in with the second wave and bring down the defenses.

I sued for peace, trying to get another city out of the deal.  Montezuma wouldn’t part with a city, but I did manage to get peace and some strategic goods out of the deal, which hopefully will set him back a bit.  Potshot went for peace as well.  We now had our foothold on his continent again.  It was time to build up for the next attack.  The evening was wearing on though, and it seemed like a good place to start winding down.  We declared that turn 620 would end the evening, and then at turn 617 both Potshot and Mattman crashed out of the game.  So I took a save and that was the end of the night.

The score did not change much over last week.  I still stick out on top, but not by any sort of huge margin. 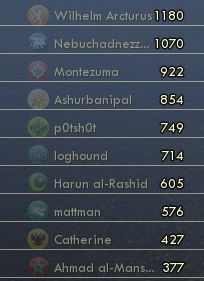 I continued to dominate the demographics chart. 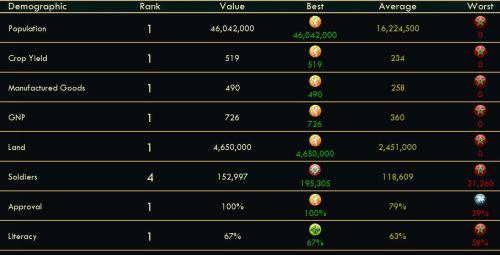 I fell back some on the soldiers front, landing in 4th place.  Potshot and I appear to be tied for literacy.   Our program of ongoing research agreements are helping keep us competitive, though as you can see the Aztecs had a couple of more advanced military units in the fray.  Great War infantry against our Civil War level riflemen.  But I have artillery, which is the great equalizer.

And then there is the map. 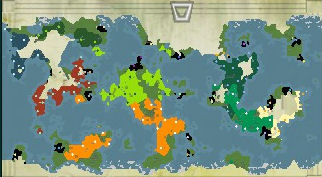 You can see how nice my all orange empire looks after the re-org.  And I also managed to explore the empires of both Mattman and Loghound, with whom I have open boarder agreements for now.  The Russians are definitely on the ropes in the north.  They just need to come to grips with the Assyrians.

I suspect next time will feature a more serious drive into Montezuma’s empire, and then we will be at the gates of Babylon.  However, since this coming Friday is US Independence Day, we will likely be skipping a week before we return to the game.

That is the end of week 9.  Previous posts for this game are listed here: