The Loremaster summer project continues.  I think I have been able to carry on with it as I have in part because of the nature of a quest driven goal.  It is very easy to log on, advance through some quests, then go away, only to pick things up again later.  And then there is the whole tourist aspect of running through zones to see how they have changed since back in the day.  That works well now, but once I advance into Outland and The Burning Crusade content, things having changed won’t be part of the picture.

Anyway, since last time I have managed to pop through three more zones with my rogue, starting with Desolace.

I apparently have to open each of these zone descriptions with a statement about not having fond memories.  So much Kalimdor hate.  I think, deep down, I resent that Kalimdor has a name, while The Eastern Kingdoms is just a description.

My earliest memory of Desolace involves running.  This is a mid-30s zone, so back in the day it might have been one of the last you went through before you got a mount.  I remember running from Ratchet in The Barrens through the Stonetalon Mountains, to Desolace, and realizing that the trip took me nearly 45 minutes.  That is almost an early EverQuest length cross-continent trip.  And then once you got there, you ended up running all over the zone again and again.  I particularly remember that skeleton infested canyon down in the south end of the zone.

Now though, there are several flight points in the zone, you get a mount at level 20 so you don’t have to run, and upon entering the zone, you even get a free lift to Nijel’s Point, the Alliance base in the zone.

Why walk when you can fly?

The zone itself, despite being one of the featured “changed” zones for the Cataclysm expansion, hasn’t changed as much as you might think.  Yes, there is the big green patch in the middle now, and you spend more time with the nagas and less time with the centaurs (and that “choose a faction” deal is all history), but as a whole it still has something of the same feel it had for me.  And, for the most part, the quest chains have been tightened up and improved.  There are fewer “just go kill some things” quests, though a few of the old ones still linger at the start of the zone.   And there are the requisite vehicle quests, which I often find a pleasant change.

The zone also feels a bit more tied together with a story.  Cataclysm might not have added any new zones that I really like, but if you wanted zones to feel more cohesive in terms of story, you got that at least.

The zone ends up with a minor boss fight that uses a creature model from The Burning Crusade if I recall right.

Was she ever in vanilla?

Nicely, I got the quests achievement just as I was wrapping up the last few quests in the zone, so I did not have to trace back my steps to find the missing quest.

That put me on the road south out of the zone and into Feralas.  Though first I had to head back to Darnassus, as I also hit level 40 at the end of Desolace, so I was due for a mount upgrade.  But then it was off to the green zone of Feralas.

Of Cataclysm updated zones I have been through far, Feralas has seen the least changes.  The zone is pretty much intact from pre-Cataclysm days.  Yes, the west coast and Sardor Island were damaged, there are more flight points, and the storyline there has changed, but a fair number of the old quests remain.  You will go hunting for yeti pelts.

But other aspects have been trimmed quite dramatically.  You are flown out to Sardor Island for a couple of quests that barely last long enough for you to make a Thomas the Tank Engine reference before you are winging your way back to the mainland. 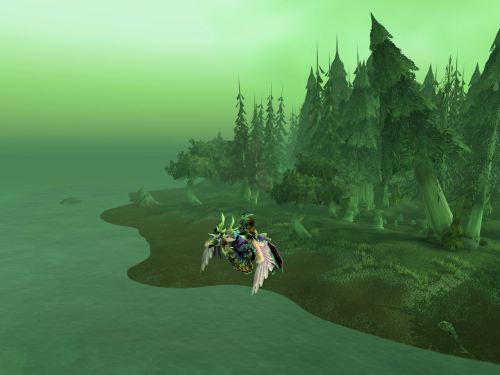 The majority of the quests are concentrated in the stretch of land between Feathermoon and Camp Mojache, the Horde base that straddles the main road through the zone.  As is custom, I managed to wander into range of the Camp Mojache NPCs and get myself killed.

I did run into one quest issue.  I do not think the quest was bugged, but I could not figure out how to get Might of the Sentinels to complete.  I gave it a couple of tries, dropping it and picking it back up again, but it never wrapped up for me.  So I kept it in my quest log to return to if I needed one more quest to finish the zone.  The quest itself is memorable in that it features a globe of Azeroth, which seems to be missing Northrend. 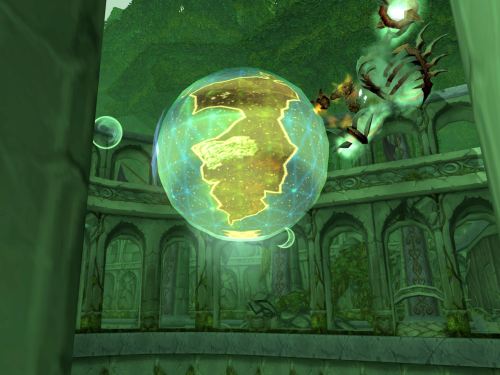 The globe in Feralas

As it turned out, the quest was not on the main thread through the zone and I ended up at New Thalanaar just two quests shy of the 40 needed, and there were four quests waiting for me at that end, so I was able to get the achievement without having to return for the unfinished quest.

Which put me on the boat to Thousand Needles.  Literally.

When you wrap up at the eastern end of Feralas the lead-in quest puts you on a boat that runs you through most of the zone… submerged in water since Cataclysm… out to Fizzle and Pozzik’s Speedbarge.

If you can question how much Desolace and Feralas really changed with Cataclysm, with Thousand Needles it would be tough to find much that remained the same.  Once a dry, desert area of tall mesas and a salt flat that was home to the Mirage Raceway, the whole thing is now a lake, and the speedbarge, floating in the middle of it, is the first quest hub.  Occupied by goblins and gnomes who have an uneasy truce, you end up helping them secure themselves from the pirates on the east coast of the lake.  Oh, and you salvage things for them.

The one quest that remains from the old days of Thousand Needles involves salvaging rocket car parts.  You only need to find 10 now, as opposed to 30 back in the day, but they are the same parts strewn about the same raceway.  It is just under water now.

Once I ran a raceway…

Water is the focus of the first half of the quest chain in the zone.  Fortunately, they give you underwater breathing so your many ventures at the bottom of the lake that is Thousand Needles are a little easier to deal with.  You also get a boat.

On a boat yeah…

There is much to be zone around the speedbarge.  As I mentioned, there is salvage and pirates, plus some more centaurs who are sitting on some oil reserves that the combined gnome/goblin forces want to exploit.  And there are plenty of sights to see.

That is a big, dead whale shark

Eventually, about 30 quests in, the speedbarge quest chain runs out and you are done there.  That puts you at the half way mark for the quest achievement.  Fizzle gives you one more quest, which sends you back up the lake towards Freewind post.  There, the war against the Grimtotem tauren commences… though I could have sworn the Alliance was supporting them back in the Stonetalon Mountains quest chain.  You end up fighting across the various mesas and then across the south bank of the lake from Highperch, where you free some adorable baby pridelings, down to Twilight Withering. 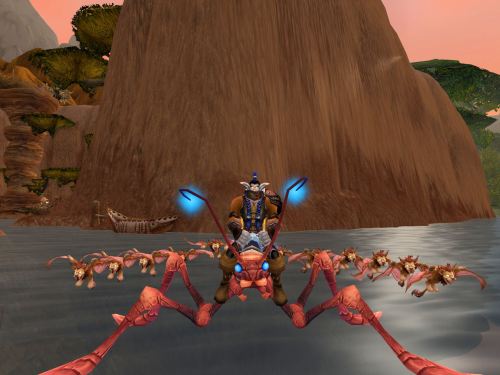 A dozen pridelings in tow

The quest chain on the mesas includes an NPC tagging along for the whole trip, so as a rogue you want to stealth past things, but you have this fully visible dolt next to you who might as well be shouting, “Hey, are you being stealthy? That is sooo cool! I can barely see you sneaking up on that Grimtoten warrior!  Hey, warrior, can you see my friend here?”

Still, she was a good fighter as well as being a mobile quest dispenser, so at least I did not have to do a lot of back and forth to advance the quest chain.  Along the south bank you lose your NPC shadow and the situation becomes ideal for a rogue.  There are a number of quests where you can just slip on past all the bad guys and ambush the one guy you want.  I ran down the quest chain and hit the 60 quest mark only a couple quests shy of being done.  Again, excess quests, so no need to go back and find quests I missed. 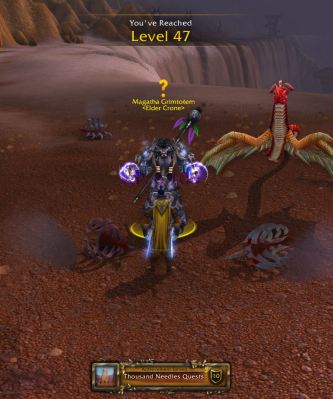 I also hit level 47 with that turn-in.  I ran down the last couple of quests, which ended up back on the speedbarge, where Fizzle gave me a nice blue item.  In addition to going for the quest achievements, I have also done the whole thing so far with gear from quests or drops.  Every time I think I might want to buy a new weapon, I go look at the auction house and the prices drive me away.  My sense of value in the game has not kept up with inflation I am sure, but I still don’t think 300+ gold for a level 50-ish weapon that my character will out grown quickly is a good deal.  I am tempted to just get him an heirloom dagger this weekend when Darkmoon Faire pops again.

The final quest pointed me towards Tanaris.  But I already have the quest achievement for Tanaris via my monk, who is almost ready to wrap up Un’goro Crater as well.  So my rogue will be heading to Felwood next and then to Winterspring.  And when those two are out of the way, I will only have the Draeni starting zone, Bloodmyst Isle on my list for Kalimdor.  I had originally thought I would roll up a Draeni to run that… in fact, I already rolled him up… but with only that zone on the list, I might just go back and twink it with the rogue.  Or maybe not.  I still have a bunch of work in the Easter Kingdoms before I move on to Outland and The Burning Crusade zones.