It isn’t much of a war, but it’s the only war we’ve got, so enjoy it

We’re going to Delve.  Again.  There is something that draws Goons and their allies to Delve every summer.

And I swear, I am never making an effort to move anything out of Delve again.  Not only can it be annoying, we just end up going back there in any case.  Remember the Rifter that got blown up while I was tackling a while back?  I left that in Delve after the 2012 war.  But I was able to pick it up again in Delve… twice.  That Rifter lasted through two summers and almost made it to a third. 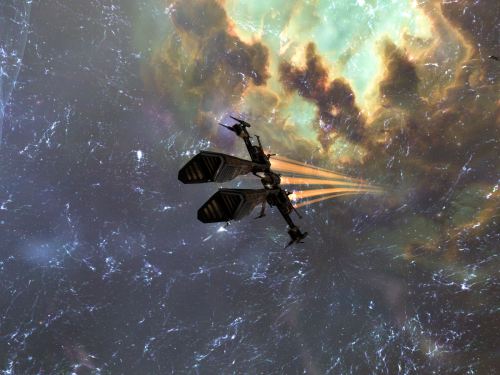 So I am not going to worry about hauling anything out of Delve anymore.  It will just wait for the next war… unlike all that crap I left in Curse.

I have some useful ships sitting, gathering dust in a couple of the NPC stations in Curse.

But I digress.  More after the cut.

The Mittani announced the deployment on Wednesday of this week in a CEO update which, like every CEO update he does, generated howls amongst our regular foes.  Reddit, not coincidentally the home turf of erstwhile opponent TEST, is reported to be a hotbed of outrage over this.  The main point of rage is generally that such updates are propaganda, with which I could only agree.  But there is this assumption that such posts are intended for an internal audience, that this is just propaganda for the CFC rank and file.

Well, okay, this disclaimer above every alliance update over at TMC sells that idea.

(Editor’s Note: Alliance Updates are intended for an internal audience and should be considered propaganda. This was originally posted by The Mittani on Goonfleet.com.)

And that is likely true of many such updates.  But CFC updates are posted publicly on purpose, and have been for as long as I have been out in null sec.

Before TMC (usage note: TMC is the web site, The Mittani is the person) was a thing, Endie used to post them to the forums in Kugu.  And, as such, you pretty much have to assume they are written with more than an internal, CFC-only audience in mind.  They are both to inspire allies and provoke foes.  They are to rile up the hostiles, to anger them, and to get them to come fight us.  Because we need content too.

And apparently it works so well that The Mittani himself is going to make such posts over at TMC a more regular thing with a new column called Traffic Control.

Or such is my theory of GSF CEO Updates.  I claim no special insight into this, so your mileage may vary.

Why Delve?  I can only assume that the shape of space dictates the battlegrounds.  We fight over the same systems time and again.  When Germany invades France, Belgium suffers.  When the CFC moves south, we tend to pass through Delve.  I wonder if anybody has done a study of what systems and regions are truly strategic and get fought over the most?

Anyway, it is where we go, because it is where our foes go.  Northern Coalition is deploying to KFIE-Z in the NPC space in Delve, so we are headed to our forward base in F2OY-X, which technically is one jump into Querious, but which controls the jump gate into Delve from the east.

So I was on last night, hanging about, waiting for one of the promised convoys to move some of my bigger ships down to our deployment base.  It is dangerous to go alone.

However, convoys were not happening.  My guess is that with commute strat ops from VFK having been going south regularly and the fact that several groups had previously  deployed south on their own, that critical mass for a convoy hadn’t been achieved yet.  Maybe this weekend.  So there I was, sitting in my Apocalypse in VFK-IV waiting for a ride down  south when a Jabber alert popped up for something else.

Dabigredboat, DBRB, and his bomber fleet managed to find a Thanatos alone in a dead end system in Delve, had it tackled, and needed some people to pile on to bring it down.

That sounded like something to join in on.  I had a clone down in F2OY-X along with some ships, one of which I was sure would be useful.  So I exited the Apoc and clone jumped down to see if I could get in on the kill.  I was sure I had a stealth bomber on hand.  But when I got there, I found myself with a Scimitar, an incorrectly fit Megathron, and a Harpy.  I must have moved my bombers the last time we left.

But a Harpy… that seemed close enough.  I joined the fleet and got onto coms where DBRB was going between rage and exultation as the battle with the carrier kept going.  At one point the carrier got away, then they scanned it down and landed on it, only to have it warp off again.  The carrier pilot, who was skilled, was also taking a toll on DBRB’s bombers each time they clashed.  I headed for the system, MJXW-P, as the fleet landed on the carrier yet again.  DBRB was yelling for point and bubbles as I landed in 1DH-SX, and by the time I hit the next system, it sounded like the carrier was thorough tackled.  Now it was just a matter of killing it off.

Easier said that done.  It was ants attacking an elephant.

Any time the carrier pilot could lock a bomber and gets its drones engaged, another ant died.  I arrived as DBRB was laughing aloud about how many frigates this carrier kill was going to cost, while calling for more to pile on.  We were told to orbit at 20K and warp off if we got yellow boxed, but the bubbles were arranged around the carrier in such a way that you were likely to be inside of one and unable to warp off immediately.  So more bombers blew up.

I got targeted twice.  The first time I managed to get clear of the bubble I was passing through and warp off after drones started hitting me.  The Harpy is a bit tougher than a stealth bomber.  The second time I saw the carrier start to target me, the yellow box blinking in my overview, he was already in structure and I figured he would blow up before he could finish getting a lock.

And I was right.

One carrier kill.   I ended up putting more damage on it than I would have guessed.  It helps that I survived for a while I suppose.

Of course, if you just want to look at kills versus losses, the carrier pilot did quite well in the battle.  I count 24 stealth bombers, interceptors, and other frigate hulls killed by the carrier for July 11, 2014 in MJXW-P.  That is a banner day if you worry about keeping your kill board green. (i.e. More kills than losses.)

The ISK war though… each of our losses would have had to have been worth more than 100 million to balance out the 2.5 billion ISK loss of that carrier.  I think we might have won on that front.  And it was a fun fight.

The pilot was rumored to be a Northern Coalition alt, something perhaps supported by reports that NC was forming up to get us.  It was time to leave.

As is his style, DBRB sent us first in one direction, then another, then changed his mind again.  Don’t get me wrong, I do enjoy flying for DBRB, his joy is infectious and he tells some good stories, but you do learn to wait a couple breaths before you follow any order to warp from him.

The bombers had the option of cloaking up should they go the wrong way, but my Harpy was a bit more exposed.  So I decided to see if I could just blast through the straight route back to base.  I got lucky and the gamble paid off.  I jumped into A-ELE2 to find a dozen reds 30km away from me on the gate, but they seemed to be busy with something else… probably the person who jumped in ahead of me… and I was able to warp to the 1DH-SX gate and go my merry way back to base.

And so the conflict in Delve begins.  We will see if it ends up becoming something.  Without territorial ambitions, it can be tough to bring a foe to battle if they don’t want to fight.  Part of what makes sovereignty wars fun (and bloody) is that at some point you must either stand up and fight or lose territory.  The time and location is known, so there is no hope of surprise, you just have to go there and duke it out.

And, always the space tourist, here are some pictures from the battle with the carrier in MJXW-P.

Headed out, a Harpy loose in Delve again 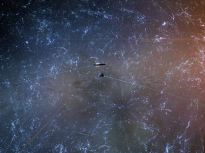 My wee Harpy in orbit 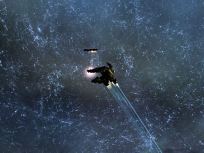 Thanatos burning, which means it is in structure

1 thought on “A Rumor of War in Delve”