Housing is one of the great line-item features that a lot of people think every MMO should have.  There is a strong desire to have a place to call your own in what tends to be an unchanging and unalterable virtual world.  There is some need within us to leave our mark somewhere in the game.  I get that.

And companies have responded to that over the years, offering up various forms of housing.  Housing was a big part of Ultima Online back in the day.  Housing was part of the attraction of WildStar, which just launched a few weeks back.  And over the years I have explored various implementations.  If I play a game long enough, and it has housing, I am usually there to give it a try.

But how well it sticks for me… well, that is another story.

Rift offered up housing with the Storm Legion expansion, but it was so free form that I barely did anything with it.

Unfurnished Dimension by the Sea

People have done amazing things with dimensions in Rift… they were even doing so back during the Storm Legion beta… but, like most of Storm Legion, it just didn’t hook me.

Lord of the Rings Online, by comparison, offered some very pretty housing that was, in fact, a house.  A house on a lot even.

A house in Bree

But the options for it were so limited that I ended up letting it lapse.  There wasn’t much advantage to having the house and the customizations were limited to just a few locations within the house.  You could hang up things from the world… taxidermied monsters or fishing trophies… but it still felt very generic.

And then clipping issues…

And while I liked the idea of there being a yard, the instanced neighborhoods were somewhat awkward.

Elves and their damn monuments

And it was tough to find a neighborhood where all of us could find a house we could afford.  In the end, the minor storage benefit of my house in LOTRO meant I let the lease lapse.

EverQuest actually threw down and added housing with the House of Thule expansion.  It borrowed a lot from its younger brother, EverQuest II, while using the instanced neighborhood model similar to LOTRO.  And I was reasonably impressed with SOE’s ability to overlay yet another complex interface onto the aging EverQuest client.  Plus the houses looked good.

The problem there was that I was pretty much done with EverQuest as a main game by that point.  I like to visit old Norrath, so I had to go try it out, but I had nothing really to put in the house and the upkeep, which was aimed at those who had kept up with inflation, was well beyond my means.

And there have been others.  Runes of Magic offered housing that gave you some form of storage, along with a woman in a skimpy French maid outfit.

Landmark seems to be all housing.  It is about as free form as you can get. no game at this point. 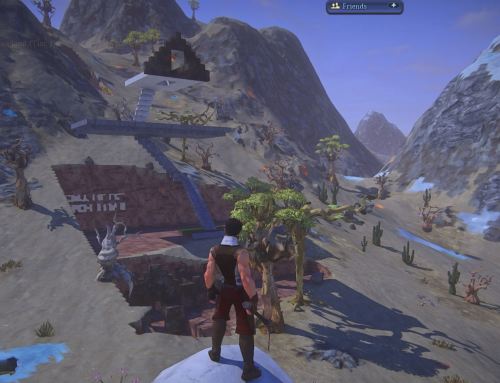 The pity is that there is no actual game around it yet.

Meanwhile, in EVE Online, the Captain’s quarters… the start (and probably the end) of housing in New Eden… allowed you to see your full body at last, and then park that body on a couch to watch something boring on a screen.

What is on Space TV today?

And since I am on about different flavors of housing, I will mention Star Wars Galaxies before some fan comes in to remind us all that this was the greatest housing ever.  We will have to agree to disagree on that point.  Yes, it gave you your own little spot in the real world where you could open a store or whatever.  But it was a visual blight on the game,  with huge clumps of houses strewn across the open landscape, encroaching right up to the edge of any in-game landmark.  It made the game look like a Tatooine trailer park.

But after having gone through so much in-game housing over the years, I have to say that there has only been one housing model that has really suited me.  And that is the EverQuest II model.

Yes, you do not get your own house in the midst of the world.  At best you share a door to a stately home or guild hall with everybody else who has rented the same facility, so you all live there in parallel in your own instances.  I do not think that is necessarily a bad thing.  It keeps away the blight problem, and while there is the problem of finding somebody’s house from a listing at a door, one of the bragging points I have heard about the SWG model was that finding people was difficult so that knowing where a given person lived and set up a store gave you power.  I’ll take the less blight version.

But the key for me was that EQII housing gave me exactly what I wanted, which was a simple house where I could hang trophies and other rewards from my travels.  I had the option to decorate, and at times Gaff, who had a carpenter, would send me some neat furniture to spiff up my home, but mostly I just decorated with things picked up as I played.  And the important part was that somebody at SOE foresaw that need and provided me with plenty of items to stick in my home.  In fact, whoever came up with the reward of a weapon you could mount on your wall for the Lore & Legend quests was a genius, followed by the person who decided to make heritage quest rewards displayable in your home.  I went through and looked at every character I had played past level 20 the other night, and every single one of them has a house and has at least some Lore & Legend quest rewards hung on the wall.

Weapons on the wall

There are other aspects about it that make EQII housing good.  The interface is simple.  The house models themselves come in a variety of designs, from simple box flats to a whole island if you want a big guild hall.  And the base models are cheap.  You can have a house in any city for five silver a week, which was inexpensive back at launch when SOE was working very hard to keep a lid on inflation and no mob in the game dropped actual coin.

EverQuest II housing is really ideal for my desires. It is just a pity that it is in EQII.

It is a pity because I do not play EQII.  I don’t play it because, for all the little things it does right, I don’t enjoy the main game.  I don’t enjoy the main game, the character progression and zones and levels and what not for various reasons.  Some of the reasons are pretty concrete, such as the fact that none of my close friends play the game anymore.  It is on the official “never again” list for the instance group.  Some of the reasons are very subjective.  I really don’t like the 50-70 zones all that much.  Everything after Desert of Flames makes me yawn, and even that expansion still strikes me as “the new stuff.”

After all of the above, I am finally getting to my point.

So I love housing in EverQuest II and the music system in Lord of the Rings Online and the old world of EverQuest and the OCD inducing find all the points of interest apects of GuildWars 2 and… hrmm… I am sure sure there is something I could inject here about Rift if I thought about it… but I don’t play those game because the main game just doesn’t click with me.

I play World of Warcraft and EVE Online which, respectively, ten years in has no housing at all and possibly the most useless housing in the genre.  I play them because I enjoy the main game, or the part of the main game in which I indulge.

So if you are out there trolling for page views by raging about garrisons in one breath because they didn’t meet your unrealistic and unsubstantiated expectations, after making it clear you never cared about housing being brought to WoW in the previous breath, in an environment where housing was probably a slip of the tongue to describe the feature, because Blizzard has been pretty clear in the past about their views on housing in WoW… well… I guess I got the punch line at the start of this sentence, didn’t I?  Those who get paid by the page view…

Would I like garrisons to be EQII housing brought to Azeroth?  You bet!  That would be a dream come true.

But unless you have a compelling argument that garrisons are so bad that they are going to ruin the main game, there isn’t much drama to be had in my opinion.  We can talk about how better the developers might have spent their time I suppose.  But this is a pet battles sort of feature.

In the end, I am buying Warlords of Draenor for ten more levels of World of Warcraft and all the zones and stories and pop culture references and silly shenanigans that goes with it.  And I suspect that will be the story for most people.

Is somebody going to try to convince me that this was a make or break feature for Warlords of Draenor?

Or, if you want, just tell me about your favorite MMO housing.  Somebody will anyway, so I might as well invite it!

The tl;dr version: If housing really is a must-have important feature for you, you probably aren’t playing WoW now and you probably won’t be playing it in the future.

Anyway, back to happy pictures.  I put a gallery of my housing collections in EQII, plus a bit of the Revelry & Honor guild hall (which is huge), after the cut, because it really is my ideal housing plan.