Activision-Blizzard got out in front of the press today to talk about quarterly results.

In an unsurprising turn of events, World of Warcraft subscriptions dropped from 7.6 million in Q1 to 6.8 million in Q2 of 2014 as the long wait for Warlords of Draenor continued.  The last patch, Siege of Orgrimmar, is going to be celebrating its anniversary soon.

The availability of the WoD pre-purchase and the immediately available insta-90 boost for a single character did not hold the line on subscription front as much as I thought it would.  My working theory was, “Who pre-purchases and expansion then unsubscribes from a game?”

Or maybe the pre-purchase and insta-boost did help.  The company said that most of their subscription losses were in Asia.  Specifically:

As of June 30, 2014, Blizzard Entertainment’s World of Warcraft remains the #1 subscription-based MMORPG, with approximately 6.8 million subscribers. There was a decline in subscribers quarter over quarter, which was disproportionately concentrated in the East and was similar to the seasonal decline experienced during the second quarter of 2012, prior to the launch of the most recent expansion later that year.

But then they always seem to point to Asia when there are losses, to the point that I wonder if there are any customers left there.  But there was no pre-purchase over there.  And Activision-Blizzard did bring in $658 million for the quarter, up $50 million from the same period last year, with a record 73% of those dollars coming in via digital sources.  That is a lot of people buying the Diablo III expansion, digital versions of the latest Call of Duty, and the Warlords of Draenor pre-purchase, which topped the 1.5 million mark.  That is about $75 million in the bank for Blizzard and so far they can only give us a date for when they will tell us the date the expansion will likely release. 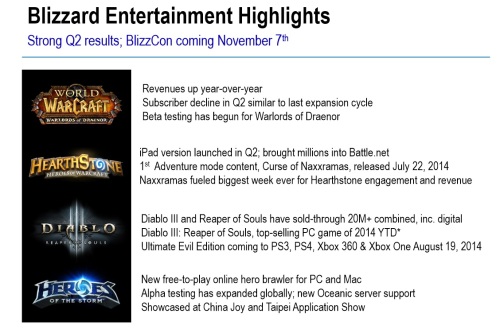 Now the question will be how will the subscriber base fare with Warlords of Draenor still clearly in the fourth quarter of this year.  It has been a long summer and while the beta will no doubt spark some interest, it will likely take something more to hold the line, much less boost numbers.

We have another entry in the PLEX-like game item arena, this time for Darkfall.  Aventurine has been busy revamping Darkfall: Unholy Wars… or Darkfall 2.0 or just Darkfall, since the original isn’t around anymore… with class overhaul, a cash shop, a presence on Steam, and a rework of the UI.

And with the latest update, Aventurine has joined the ranks of studios offering an in-game item worth subscription time that players can buy and then trade for the in-game currency.  Called DUEL (Or as they style it, D.U.E.L, with three periods because… why?) it can be purchased with Selentine (is that the in-game currency or the cash shop currency?) and then used to wheel and deal with other players.

This scheme has been seen before with SOE’s Krono, Carbine’s CREDD, Funcom’s GRACE, and, of course, CCP’s PLEX, which was introduced into EVE Online back in 2009.

It will be interesting to hear how this works out.

As I have said often in the past, this sort of thing works in EVE Online because the in-game economy is not optional.  If you play EVE, you have to buy in sooner or later or just stop playing.  With the other games on the list… the economy is optional, which has always left me wondering if their economies could support such a scheme.

Unfortunately, I do not play any of the other games offering this sort of item, so I have to go by what other people are saying.  CREDD seems to have been a good investment in WildStar if you got in early.  Some Krono shows up on the market in EverQuest and EverQuest II, but seems to be more active on the Trade channel where it can be used for barter for specific things in addition to being traded for the in-game currency.  And GRACE hasn’t been in Anarchy Online long enough for it to have settled down.

So I am left wondering if Darkfall has the critical mass of players and an active enough economy to make something like DUEL viable.  I was interested to see that, despite its hardcore nature, Aventurine opted to make DUEL unlootable when you kill another player.  No headline comedy.  Of course, CCP started off with PLEX being stuck in stations, so maybe DUEL will change later.

And my final question is, what does DUEL stand for?  That isn’t listed in the FAQ or the forum patch notes.  They are clearly using it as a cute acronym.

CREDD is the awkward Certificate of Research, Exploration, Destruction, and Development

So what does DUEL stand for?  Darkfall Unholy wars Extended Living?

I think SOE might have been smart to just go with a name rather than an acronym.

And one question past my final question; who will jump on the PLEX-like bandwagon next?