It looked like it might be a good week for fights.  The word came down that the rest of the N3 coalition was going to deploy to Delve to join Northern Coalition and help boost their numbers.  NC and Black Legion had also gone out of their way to reinforce a number of CFC towers in both Delve and Fountain, which I took to be a good indicator.  As much as null sec veterans loathe the sovereignty mechanics, timers mean fights.  Both sides have a vested interest in showing up and being on grid when the tower comes out of reinforce.

However, it was not to be.  At least not for the times I was online.

During the week we rolled out to cover some tower swaps in Delve.  I was in Baltec fleet for that run.  We headed out to 1-SMEB to stand by as a small tower of ours was blown up so it could be replaced with a larger one.  Hostiles were reported forming up, but could not get the numbers to come fight us, so the only kill mail for Baltec fleet was our own tower.

On the way back from that we stopped at the BL staging system and hung out around the undock in hopes that somebody would come out.  CFC Sky marshal Blawrf McTaggart even flew around the station in a pod daring the enemy to emerge and pop him. 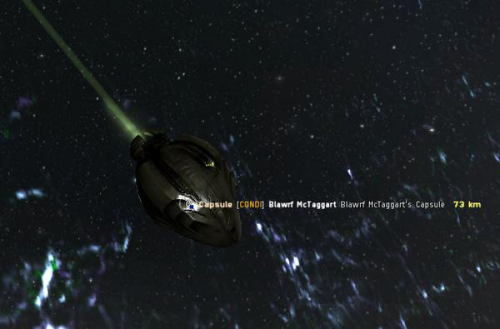 But they didn’t have the numbers to come out.  Meanwhile, people started locking Blawrf up just for fun.  He was getting reps from several of the logis in the fleet.  Then Jay Amazingness put a target painter on him which lead one of the Fatal Ascension dudes to open fire… because FA.  So essentially we ended up popping him for BL.

Blawrf painted, getting reps, as the fatal beam lands…

It is all fun and games until somebody gets hurt.

After that it was back to base.

Saturday looked to be a prime day for a fight.  There were several towers in reinforce up in Fountain and Blawrf had been pinging us well in advance to get people out for the timer.

I was on early for the first call, as were a load of people.  We had well over 100 people in the Tengu fleet before the announcement that the fleet was up went out.  There was also a Baltec fleet and a Celestis fleet up as well along with the carriers that would be needed to rep the towers after they came out of reinforce.  Of course, we were gummed up for a while trying to get boosters for the fleet.  You need one for each wing and one for the fleet itself, each of which has to fly a very expensive ship and, in the case of the wing boosters, hang around in a safe spot during the battle giving boosts while hoping not to be scanned down.  I am still a long way from my training plan for that fleet role.  Maybe next war.

But eventually we got the support ships we needed and we off to Fountain.  We bridged through various systems and got to the first tower and hung out.  Intel came down saying that the hostiles could only get about 100 people into fleets because they were all watching the Alliance Tournament.

(Editorial: The Alliance Tournament is never going to be a popular esport because an outsider can’t tell what is going on by looking at the stream. You either see a single ship, which doesn’t give context, or you see the grid with some icons on it which is dull.  And even the announcers can’t keep up with what is going on with all the ships.)

So with 600 of us stomping about Fountain, there didn’t seem much point for them to come out to play.  But we still had to stick around and cover the capital fleet and their tower operations just in case.  That meant staying system, but we didn’t have to sit on the tower itself, so the FC took us through some anomalies just to shoot stuff. 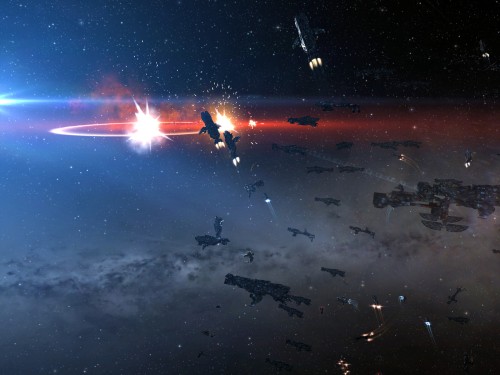 That got us some ISK for bounties as we melted anything that showed up.  A lot of us were shooting, so those bounties at least exceeded the cost of the faction ammo we were shooting for most of us.

We also got to admire baltec1 and his amazing fast Megathron.  People were moaning about a battleship being in a Tengu fleet, assuming it would slow us down in fleet warps… which adjust to move at the speed of the slowest ship… not knowing how it was fit.  I had seen it previously flying with a Harpy fleet where, jumping alone in a race against the fleet, it landed ahead of the Harpies every time.

We stayed at that until the caps were done and then headed home.  We did get two participation links out of the deal.  Participation links, or PAP links, are the metric by which corps and alliances in the CFC see who is pulling their weight, to the point that we have all become a bit obsessive about getting our PAP links for each fleet.  Some alliances pay members for each PAP link.  In our alliance we just get yelled at for not clicking enough of them.  (I was the #3 clicker of PAP links for our corp last month, behind our CEO and a corp member who is also an alliance FC.  Not bad for a lazy, on-call pilot.)

Sunday morning saw a call up for a Harpy fleet to go shoot hostile capital ships.  That is the sort of fleet everybody loves, especially when the caps were reported to be just a few jumps from home.  The fleet was already under way when I got in, but they were running via gates so I was able to catch up by taking jump bridges to PR-8CA where the hostiles were reported to be.  It turned out to be a safe route as a CFC Tengu fleet was headed out that way, so I had plenty of cover and arrived in the target system at about the same time as the rest of the fleet, albeit through a different gate.

By the time we arrived any capital ships had vanished.

We did, however, run across an NC/BL Ishtar fleet and were able to bubble them up and pick off some of their logistics in hopes of setting up a dunk.  They slipped away a couple of times and eventually headed to a POS where a titan was waiting to bridge them out.  We had to sit and watch them jump away, though we did knock off about a dozen of them during the chase, including Futurama reference of the day, 25star-General Zapp Brannigan.

So that was my weekend in space.  A lot of running about and hanging around with a few moments of combat.

On the hopeful side for the future, there is a report up that a group of 14 alliances has formed a new coalition.  Called “Battlement Coalition” they are declaring that they are coming after the CFC to reclaim content.

I am a little confused by a quote attributed to leader, PantsuFan:

CFC has taken a lot of content away from the pilots in EVE and we are here to rectify that. CFC controls nearly one half of the game content in eve now.

As far as I can tell, we haven’t take any content, we ARE the content, at least in null sec.  And even then, our wars hardly matter to most EVE players, except that they sometimes drive up market prices and occasionally cause TiDi in the odd low or high sec system.

The new coalition includes a number of alliances we were shooting at anyway, such as Triumvirate and Mordu’s Angels.  How this will play out has yet to be seen, but I can only imaging that more fights will work for us, given how many pilots we had piling into the game for the timers this past weekend.  This might actually be a boon for the CFC, since I think the most likely reason it might crumble is lack of fights. (The Mittani responds to this development, complete with competing PowerPoint presentation.)

And that is about all the news I have from space for the past week.  Some fleets, a few kills, the promise of a new foe, and screen shots… always screen shots after the cut.