[Addendum: Since I am getting a lot of search traffic on this, I describe how to transfer Pokemon from Pearl, Diamond, Platinum, HeartGold, or SoulSilver in the middle the post linked here.]

When I finished up Pokemon Y a month back, I felt like I was about done with the game.  I can be very focused and very goal oriented when it comes to short-to-medium sized tasks.

This is how, as an example, I have been able to tackle some of the Loremaster achievement tasks as readily as I have.  The achievement is broken up into a series of smaller tasks, each of which the player can take on individually.  Handing me the sum total of quests to be done would be too much.  But zone by zone, it isn’t so bad… for the most part.

After finishing up Kalimdor and the Eastern Kingdoms I hit something of a wall.  Facing the prospect of Outland, I didn’t really log into the game for about a week.

And so it was with Pokemon.  While I played Pokemon Y over the course of nearly four months, I ended up doing it in essentially three focused sprints, with the last one, end goal in sight, probably being equal in duration to the other two combined.  And at the end of that last sprint, mission complete, I was ready to put Pokemon down for a bit.

But after a couple of weeks away, my interest in the game has started to grow again.  This has largely be because of the upcoming release of Pokemon Alpha Sapphire and Omega Ruby.

My daughter and I are already set to play.  She has picked Omega Ruby as her title, so I will be playing Alpha Sapphire.  We just have to take out jar of coins down to the CoinStar machine and turn that cash into an Amazon gift card to be ready to pre-order.  We are good to go there.  And the launch date, November 21, isn’t that far away.

But it is Nintendo who has been driving my interest a bit.  They have had a couple of special download events to keep people interested while also putting out new bits and pieces of information about the new game to build excitement.  Polygon has created a special section on their site devoted to Pokemon, so I have been gorging on information there.  One of the latest tidbits to come down about the upcoming titles is the return of the secret base.

The secret base idea was part of Pokemon Diamond and Pearl back in the day, as part of the whole underground environment where you could play with other people (and actually see them running around) over WiFi.  That was one of the great features those titles, my daughter and I spent hours just tooling around in the underground. But it was also one of those features that lasted for just that generation and went away with the next.

A base back in the day

Pokemon games are rife with such features, each version having a couple that disappear with the next.  And while there are some you don’t miss, others stick with you.  So the fact that there is going to be some form of secret base again that others can visit, including the whole flag stealing mechanic, is a pretty big deal for me aside from the whole “place of your own” housing aspect.

So that has gotten me interested in getting ready for the new versions to come out.  But the question of what to do still stands.  I have started going out and collecting some of the “new with X and Y” Pokemon to transfer over when the time is ripe… just in case I go insane and decide I need to fill out the National Pokedex again.  Nintendo has also put up a guide to collecting all of the mega stones for mega-evolutions.  It is a downloadable PDF file.  While the whole mega evolution aspect of Pokemon X and Y wasn’t a big deal to me, I might as well complete the set while I have the chance.

I will have to go through the guide book for Pokemon X and Y to see if there are any other things I ought to do before the new versions come out.  I always buy the official guide.  It isn’t strictly necessary to get through the main story line… though if you put the game down for a few weeks, it can help you regain your orientation when you return… but for activities outside of the main story the official guide can be invaluable.  And while, in this day and age, there is always some place online where you can find the information for free, I have a good deal of fun sitting in bed or on the couch or someplace else away from my computer and leafing through the book, looking up where to find a particular item or Pokemon, and then running off to get it.  The key bit there is “away from my computer” where I spend most of my time.

So clearly some excitement is building within me for the new release.  Even looking at the map they have put up of the Hoenn region makes me happy. 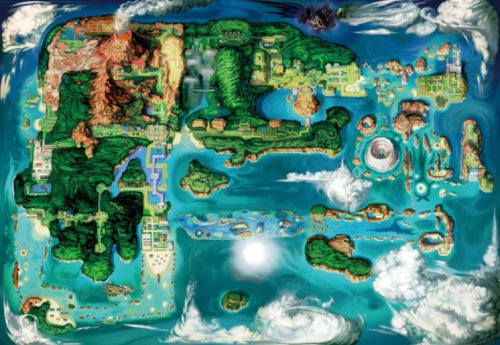 I can practically see the story laid out there and all of the places I will go.

Of course, if I really wanted to get myself ready for the possibility of another run at the National Pokedex, I would get out my copy of Pokemon White and finish that up.  That would give me access to a pile of Pokemon in that game as well as being the only route to move some of my rares from Pokemon SoulSilver, where I did the National Pokedex, into the current generation of games on the Nintendo 3Ds platform.

I am just not sure if I can go back to the old sprite based graphics.  Pokemon X and Y may have spoiled me in that regard.

8 thoughts on “Preparing for Pokemon Alpha Sapphire and Omega Ruby”