After finishing Terokkar Forest last week I was feeling a bit optimistic about the next zone on my Loremater project checklist.  I was headed to Nagrand. 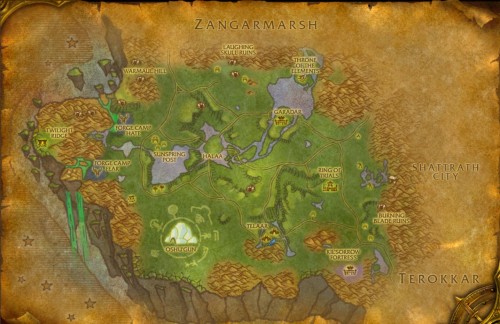 I was optimistic for a few reasons.  The first was because Nagrand is a zone that I seem to carry some fondness for in the back of my brain.  I remember doing the Kurenai faction grind, which is pretty easily accomplished if you have a yen for slaughtering ogres and collecting their war beads.  I finished that effort and have all of the talbuk mounts to prove it.  And while Hemet Nesingwary was lurking out there in the zone, what could he possibly do to me that he hadn’t done a dozen or so times before?

The second reason was because I was already underway in the chase for the 75 quests needed for the Nagrand achievement.  Finishing up Terokkar required me to start in on Nagrand to pick up a quest line that would lead back to Terokkar.  So I was starting 10 quests up.  Go me.

Finally, Nagrand is kind of a pleasant zone, made up of rolling green hill with some rivers surrounded by hills, which keeps you from thinking about the color of the sky.

What could go wrong?

And here is the thing I did not expect.  Despite the fact that everything I complained about on Bloodmyst Isle, and saw repeated in Terokkar Forest, was also present in Nagrand, it wasn’t a big deal.

I don’t know why.

I don’t know if Nagrand is just more compact, better laid out, has more interesting quests stories, better drop rates for quests, or if I just managed to do quests in the right order, or if Nagrand is just a more pleasant place to quest in.  But from where I picked up until somewhere in the early 50s in the quests completed count, I was on a serious roll.  I would pick up every quest I could find, which ended up being something like 18 active, and head on out.

I would wrap some up, head back to turn a few in, pick up some more, and head out again.  I had a constant supply of things to do and spent most of my time doing and very little time trying to figure out what any given quest meant.

And still lots of quests 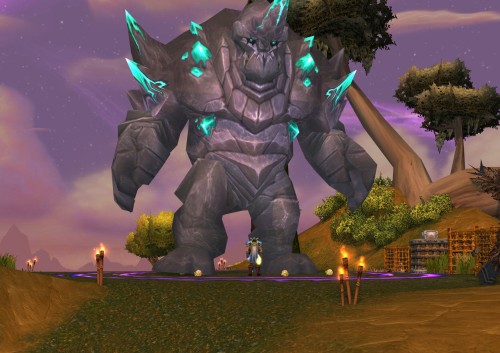 This happy time lasted up into the 50s and came to a complete halt at 60 of 75 quests completed.

At that point I had two quests in my log.  One told me to head off to Shadowmoon Valley and the other was pointing me towards Area 52 in Netherstorm.

That did not look good.

I was sure that I must have missed a major quest chain or hub somewhere in Nagrand.  Falling two, three, or even five quests short… I could see that.  But falling off the face of the map a good fifteen quests shy of the achievement seemed crazy.

So I started flying around, seeking out quest givers I might have missed along the way.  I thought I had been pretty diligent on that front, but I gave it another run.  I came up with nothing, aside from the repeatable quests, which I had already done once for credit.  It was time to go to the internet.

Over at WoWhead, on the page about the Nagrand quest achievement, somebody has listed out in the comments 80 quests that count towards the achievement.  Just glancing at that number and I felt that I just missed something and would be able to knock this out.  So I started going down the list.

There was some good news.

For example, the two quests I had, sending me to various locations about Outland, would count towards the total.  Also, there was a quest to turn in some stuff in Halaa, the PvP objective in the middle of the zone.  Some level 90 alliance players happened to be in the process of taking that objective, so I ran out and flagged myself to go help.

Of course, my being flagged didn’t do anything… or anything to help take the objective.

There was a level 90 horde paladin and rogue out there trying to harass the alliance players to slow down their taking of the objective, but once the horde players saw me, level 67 and flagged PvP, they stopped all of that and commenced one-shotting me as often as they could manage.  Then, when the objective was taken, and I unflagged from PvP and let the five minute timer run down, they commenced killing the quest NPC over and over.  It is times like this where I think Blizzard should just turn off PvP objective in old, well below level cap zones, as they are just grief magnets.

Eventually I managed to slip in and turn in the quest to Chief Researcher Kartos before he was slaughtered yet again.

He’s alive for the moment

My success seemed to annoy the horde players and they began following me around and killing any NPCs that I got near.  Not griefing at all.  So I just flew off towards Netherstorm on my flying mount, which was so slow that they got frustrated trying to follow me and went off to find something else to do.

I turned in the quest in Area 52, picked up the flight point, and then flew back to Terokkar, from where I took to my mount again and headed towards Windhammer Stronghold for the other quest turn in.  That got me to 63 of 75 quests.

It looked like I could get a couple more from The Consortium if I built up some faction with them.  There was one quest based on a random event over at Nesingwary’s camp.  I could hang out and wait for that.  But for a big quest payoff there were only two chains left to work with.

The first was the Ring of Blood series, six quests that pit you in a match against various boss sized mobs.  These come with a recommendation that they be done with a group of five.  I remember coming out to help Potshot with these at one point.  I wasn’t going to be able to solo them, so I would either have to level up to the point where I could, get some high level help, or find a pick up group looking to do the series.  But there was going to be some planning or patience involved.  It wasn’t going to get done right away.

And then there was the second set of quests with Altruis in Nagrand.  The first set was the quest line that I needed to finish up Terokkar.  The second is a series of five quests, but in order to get them it looks like I need to be at least level 68, have done some lead-in quests in Shadowmoon Valley, and have a certain level of standing with one of the two factions in Shattrath, the Aldor or the Scryers.  As it was, I had already picked the Scryers… because I like the sound of their name… and had done a couple of their quests in the hopes that they might count towards the Terokkar. (They did not.)

So it looked like it was time to head back to Stormwind and turn my experience bar back on.  And then it was back through the dark portal… the current dark portal.

It was time to head off the the Blade’s Edge mountains and the 86 quests awaiting me there.  I will get back to Nagrand and its achievement at a future date.

1 thought on “Slammed in Nagrand”