The upside for Wonky Seasons, should they be able to carry this first day momentum, is that is that their Kickstarter campaign is trending to raise a grand total of $109. 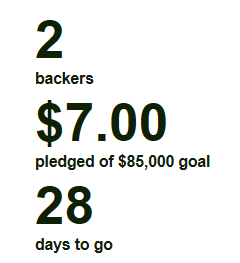 Okay, I am being snarky or sarcastic… or maybe both.  Heck, I couldn’t tell you for sure if Free Realms was their inspiration.  This is all they really say on the subject:

Wonky Seasons started because it’s creators saw how the closure of a popular family MMO game affected it’s players. We followed many stories of kids that were heartbroken and the big void the closure of this game created.

While the characters in the logo made me think of the now shut down Free Realms, they could as easily be referring to the dearly departed Toontown Online.  Or it could be some other game.  So take your pick.

I am not bringing this up to be hurtful or to have a joke purely at their expense… though that will probably get them some attention, which they desperately need… but because this sort of thing almost makes me weep for the almost boundless sense of optimism that this sort of project requires and how it is going to get smacked down by the harsh reality of the world of game development in general, and MMO development in particular.

Just last Friday I was bemoaning the fact that the Project: Gorgon Kickstarter campaign seemed unlikely to succeed largely, I felt, because it had little name recognition.  No major media outlet is clamoring for an interview with Eric Heimburg just so he can promote his new Kickstarter.  But Eric Heimburg at least has standing in the MMO game developer community and has worked on actual MMOs that have shipped, are still running, and could be considered successful… not to mention actually having a working alpha version of his game that you can download and try before you decided whether or not to kick in any money.

And with all of that, he only rolled out of the gates on the first day with $4,500 of the $100,000 he is looking to raise to hurry up the production of his game… a game that is already a tangible thing you can play.

In that context, what chance does a team with no standing and no game development experience listed have showing up with no fanfare and looking to build momentum and get the ball rolling after they have already started the clock on their campaign?  It isn’t like they are making something that will capture media attention or is likely to go viral.  Another MMO?  Who needs that?  We’re looking for the next potato salad campaign. (Which, depressingly, brought in more than Eric Heimburg’s first Kickstarter.)

So what do you tell somebody who sends you a note asking you to please do a post about their Kickstarter campaign?  Being one of a dozen or so messages in the blog inbox, I nearly passed over it.  I only looked at it because it was flagged to indicate it was sent from the feedback form on the About page here at TAGN, which meant somebody came here and pasted it in themselves rather than just using an email spam service.  And I only decided to do a post because… seven dollars?

Do you tell them to give up, go home, get a real job?

All I could recommend is that they get themselves a copy of It’s a Long Way to the Top by AC/DC… I am partial to the Jack Black version at the end of School of Rock… and to play that loudly every time life comes around to kick them in the teeth as they try to move this project forward.  If they want to get this done, they’ll be listening to that song a lot.

You can find their Kickstarter page here to read all about the project.

I was not sure we were actually going to get together and play last Friday evening.  It was a holiday weekend.  Nobody had set up a Google event.  And, honestly, I was wondering if the group might want a break after the grand finale of the Civilization V game.

But then, a little while before our usual 9pm start time, I noticed that Loghound had put up an “are we playing tonight?” message.  So I put down Pokemon for a bit and wandered over to my desk to see what was up.  There was a hangout up so I joined without issue, now that I have come to realize that some change was made at Google’s end and they now assume that you have a video source and will wait to acquire it before letting you in, so I just have to click the button to turn off video to get in.

It was Mattman, Loghound, and myself and it looked like we were going to play a game.  The game we had previously chosen, after some deliberation (which included a poll that told us we should play Borderlands 2) and a timely Steam sale, was Total War: Rome II.

But that was back in June.

And while Steam tells me that we all jumped right in and did… something… with the game back then, I am pretty sure that we hadn’t done very much since.  I know that I played through the tutorial mission, ran about a bit, glanced briefly at the multiplayer interface, and then went back to my Loremaster quest in WoW.  Total time played: 92 minutes.  Two months later, it was time to see what I remembered.

We all got Steam going and launched the game.  Both Mattman and I tried to host while Loghound, still in a borrowed house and running Steam off of an external hard drive on a less than stellar system, waited for thing to load.  I dropped my game, discovering that the button with the arrow at the lower left corner doesn’t mean “go back” as one might intuit, but rather will dump you from the game.  So I relaunched and tried to get into the game Mattman was hosting.  But the game had been set for two players and Loghound had got in ahead of me.

We started fiddling with thing and Loghound tried to leave the game so it could be reset and discovered the same thing I had about that button on the lower left, which left room for me to get into the match.  Then there was some more fiddling around as Mattman made it a four player game, with the three of us an an AI involved.  Then, since that left a human imbalanced.  So the game got bumped up two a six player match, with three AI players versus the three of us.  Now it was time to figure out what was what.