Another Summer in Delves comes to an end.  The word came down on Friday that our deployment to Delve would be closing down and that there would be many… that was the term used… convoys heading back to Deklein so we could get various ships safely home to our new staging system.

Having piled up a number of ships, as I tend to on these deployments, I was looking to get a few of the more expensive ones home.  So I was keen to into one of these “many” convoys.  I made sure I had installed a jump clone down in F2OY-X so I could hop back and be ready to bring up the next ship after the first convoy.  I had a couple ships picked out to drive back up to Deklein.  All I needed was convoys to commence.

The first one came up Friday evening.  It was specifically called to get Tengu fleet ships back up north due to an op set to roll about an hour later.  However, we could only get about 20 ships in the fleet.  That turned out to be insufficient mass to gets us cleared to move out, so we stood down.  Due to other operations going on, no further convoys were called that night.

Saturday morning I managed to catch another call for a convoy op headed north.  I jumped into my Apocalypse this time, it being the most annoying of my vessels to get back to Deklein, shoveled any excess items from my hanger into the cargo hold, and joined the fleet.  This was about at the time when TNT was losing its match in the Alliance Tournament.  We managed to get about 35 people in the fleet, which was just enough to be cleared to head out.  And so a pack of battleships set off. 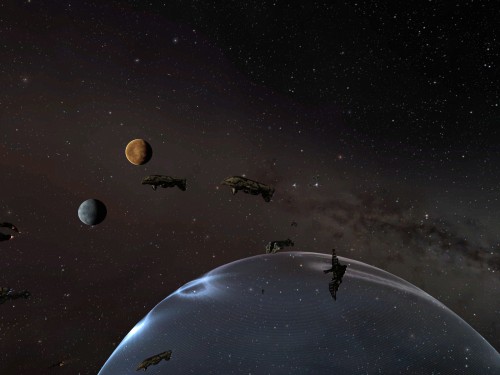 This ran like most convoys… actually, with so few people, it ran better than most… and we slowly moved from jump bridge to jump bridge through null sec, from about 7 to approximately 1 o’clock on the dial.  There was a point in Fountain where our scout spotted a 40+ fleet from the Battlement Coalition in our path.  That was enough to be a concern, as a convoy fleet is generally not fit to fight on equal terms, being a pretty random selection of ships, and depends on numbers to keep hostiles away.   An outnumbered convoy needs to be wary.

The hostiles were in a system where one of our jump bridges is anchored, so going around meant a long diversion off of our way.  But as we waited to see what they were up to, they left, missing out on a juicy target and never to be heard from again during the op.  We moved onward through Fountain, Cloud Ring, Pure Blind, and into Deklein. 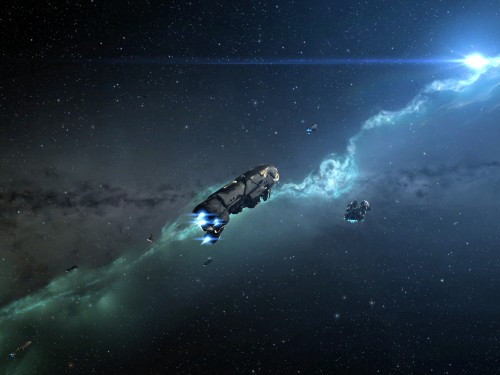 The distinctive colors of the northwest

A couple of jumps from our destination we were cleared to free burn to the staging systems.  A participation link was provided and the op was over.  I docked up, left my ship, a clone jumped right back down to F2OY-X in hopes of catching another convoy north.

However, no further convoys were announced while I was online on Saturday… or on Sunday.  And since I was logged into Jabber for most waking hours over the weekend, I am going to guess that it wasn’t just bad timing on my part.

The FC on the first convoy op, which stood down, speculated that with the push to get people into capital ships in the CFC, carriers were becoming pretty common.  And if you have a carrier deployed… and we had quite a pile… it is pretty easy just to shove a few sub caps into the hanger bay… yours or your friends… and hop home with the rest of the capital fleet.

Not being part of the capital fleet, and with most of the people I consider close enough friends that I would start asking for favors not playing EVE Online right now, I am somewhat dependent on the whole convoy thing to get bigger ships home safely.

I do own a carrier.  I bought it nearly two years back and then never really used it.  I am stuck in a chicken and egg thing on that front.  I am not confident enough in my ability to use it to sign up for capital fleets.  I literally have no clue as what to do, and while everybody is happy enough to answer questions in a frigate fleet, the more expensive the ships get the less tolerant of questions people get, or such is my observation.  And while I don’t mind being the idiot in fleet once in a while, when it starts putting people’s expensive toys at risk, I get really nervous.   But I cannot get any experience without joining up.

So, while theoretically I could fly my carrier down to Delve, pick up some ships and fly in back, the reality is that I lack the confidence to put my Archon at risk for a set of ships that cost significantly less than the carrier itself.  Meanwhile, over at DOTLAN, the route down and back they suggest is five jumps either way. 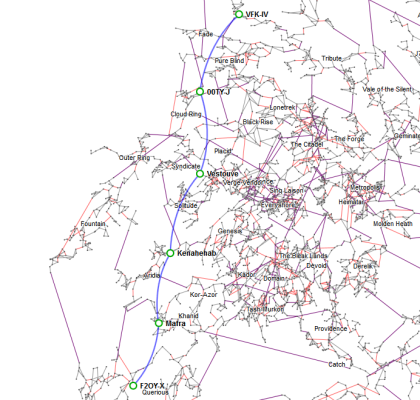 Potentially there and back…

That means getting somebody in each of those systems with a cyno as a jump target for the Archon and being at risk for at least four of the five jumps.  Add in the fact that our alliance leader hates when people lose carriers in anything but strat ops, so a round of public humiliation and a quarter billion ISK fine are part of the bargain if I screw up, and I am seriously considering just selling the Archon.  I am just not invested enough in the game right now to want the complications it brings.

Meanwhile, I’ll just leave a jump clone and a collection of ships down in Delve.  It’s not like we won’t be back.