I missed the big battle at CCP-US, where we traded a titan for 60 dreadnoughts, and the pipe-boming fiasco of Sunday afternoon, so all I really have at the end of the weekend is another round number to write about.  I have hit another meaningless milestone in the eternal quest for skill points in EVE Online.

I think the skill point thing was perhaps one of the best moves CCP made in designing EVE Online.  It is practically money in the bank, as some people will stay subscribed for ages because they are making progress on that front, even if they aren’t really playing.  And with the new limitless skill queue coming… money.

Anyway, the milestones so far, which act sort of my progress chart through New Eden as I have bounced from one thing to another over the years:

The pattern of milestones is a bit odd, though that too reflects to a certain respect my engagement with the game.  And, of course, I never hit 100 million skill points because CCP broke out Battlecruisers and Destroyers into racial skill with the Odyssey expansion, giving those of us who had them trained to five an instant boost of about six million skill points.  That jumped me from around 99 million to 105 million skill points, and spared you all one of these numbers blog posts.

Anyway, here we are at the next round number and here are how my skill point distribution stands.  Those categories marked with an asterisk changed since the last milestone, so that is where my training time went, while the numbers in parenthesis show how many skills out of the total number I have for each category.

I am clearly guilty of trying to have one character do everything over the years.  I will recycle, once again, Jester’s skill point chart that gives a general view of the whole. 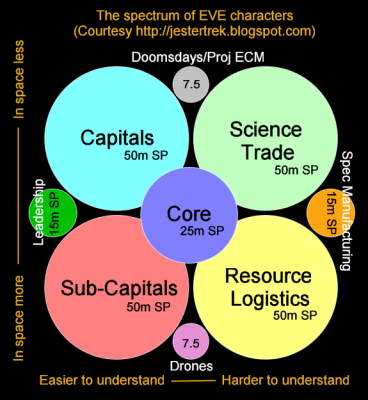 There are, as always, chunks of training time spent around optimizing for fleet doctrines.  But far and away the majority of my training time over the last cycle has been devoted to Leadership skills, with more than 6.1 million skill points accrued.

This was due to me decision back in June to train to be a fleet booster.  Getting Leadership maxed out, which means all the way up to the Fleet Commander V skill, has been described as a year-long process that you just have to buckle down and dedicate your training to.  Certainly there are not a lot of happy, useful mid-points, at least not in our fleet doctrines.  You have to have a lot of level V skills to take on the role.  My first plateau, the point at which I might actually be useful, will probably come by the end of this year, at which point I will Wing Command V and the appropriate Warefare Link specialist roles trained up, along with the Command Ships skill, so that I can fly the Damnation command ship as an on-grid wing booster in Baltec fleets.

Damnation in a POS

Let’s hope Baltec fleet is still a doctrine by then.  Given that leadership is shown as ~12 million skill points over all, my next milestone will no doubt feature mostly an increase in that category again.

All told, my character knows 295 different skills, up from 283 at the last milestone.

Only four of the new skills were in the Leadership category, while another four went into Rigging, while the final four were in Targeting where I discovered I was missing the racial sensor compensation skills.  That discovery was largely because of the skill review at the 120 million skill point level, so I suppose these milestones are not entirely meaningless.

At the end of these posts I have traditionally put in a calculation about how far I am from flying a Titan.  Way back in time that tended to be a hilariously large number, to the point of seeming unlikely to ever come about.  As time has marched forward, I have managed to edge closer and closer to that ability, to the point that I last reported that I was about 50 days of training shy of being able to fly (but not fully equip) a Titan.  49 out of those 50 days were tied up in Capital Ships V, something I am unlikely to be training in the near future.  And so that number seemed to be static.

However, in the CFC, we have a utility that shows you where you stand on your skill progression if you want to fly in one of the capital fleets.  This shows you what skills you are missing and the minimum training level that the CFC will accept, so I can now list out how long it will take me to fly a fully operation titan.  In this case, the shortest path is to a Ragnarok, the Minmatar titan. (See its doomsday weapon in action. Not a super laser like the Avatar or Erebus.)

Free wheeling Ragnarok outside the POS

This is largely due to the fact that I have trained up the skills to fly the Minmatar Naglfar dreadnought, and the capital ship level weapons skills apply in both cases.  The training plan to fly this beast looks like this:

According to EVE Mon, that is 6 unique skills, 17 skill levels, with a total time training time of 130 days, 17 hours, 44 minutes, 40 seconds.  The training time number was generated when I was in a clone without implants, and my attributes are sub-optimal, so I could cut that time down some if I so desired.  Any of the other titans would add another two days to the training time, which isn’t very significant.

Meanwhile, if I went the super carrier route, I could be flying an Aeon in about 105 days, thanks to the Amarr carrier skills I trained up for the Archon.

The Aeon looks half finished

Of course, this is just an amusing numbers exercise.  I won’t be flying either a titan or a super carrier in the foreseeable future.  In part, that is because I do not have the patience to actually earn enough ISK to buy either class of ship.  I would be stretched to fork out the 3 billion ISK required for the Naglfar I have already trained to fly.  But mostly it is because titans and avatars pretty much require you to dedicate a character full time to them.  There is no docking up and swapping ships.  Once you are in your giant space coffin, you are stuck with it.

So, while an amusing metric, super capitals aren’t really a goal for me.

Sometimes you can even catch me in high sec buying skills or just sitting in my training implants clone.

2 thoughts on “One Hundred and Thirty Million Skill Points”