So here’s the thing.  Despite the last week being mostly talk about the expansion and such, I haven’t really been playing a lot more World of Warcraft.

Part of that is because I was binging pretty hard on the game during the two weeks preceding the launch.  Such a sprint usually leads to some time away from game.  So, in the midst of the big launch weekend I spent time in EVE Online getting myself home from the last deployment.  I also spent a couple hours messing around with the Isle of Refuge prestige home in EverQuest II.  And I downloaded and played the demo for Combat Mission: Red Thunder, the eastern front expansion to the revised Combat Mission series.  As with the original series, the Normandy scenarios don’t excite me, but the eastern front is wild.  I many need to buy this when I have some free time.

Not that I did not find time to play World of Warcraft.  Given the binge of the last couple weeks, I probably played more of it than I might have otherwise because of the expansion.  But I am clearly in no hurry.  I took some time out to level up my rogue, who made it to 88 over the weekend, getting me closer to having four alts ready for Draenor.  I even did some pet battles, finally getting my first trio up to level 25.

In Draenor itself I have been moseying along at a more leisurely pace, trying to move Vikund forward on a broad front, which means taking some time out from strict adventuring to cover other things.  As such, he just made it to level 94 last night.

If you were stuck behind queues all weekend, that probably seems like a lot of progress.  On a server that was open for most of the launch, that wasn’t too tough.  I think Earl got there with his alt in the first 24 hours… and then he made a new alt because he has a friend who is giving WoW a try, so he is off playing with him.  But you can find people who have hit level 100 pretty readily at this point.  Too fast? 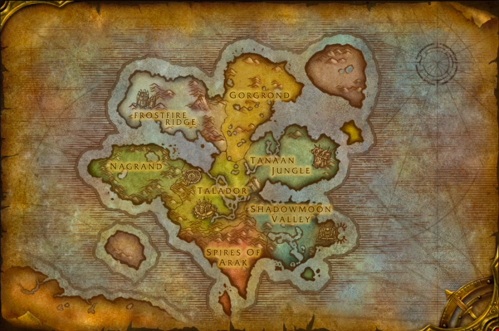 That’s been fun.  The quests have been good.  I think I have finally gotten used to the little hand icon having replaced the little cog icon for things you need to click on during a quest.  I realize that has been in place since Mists of Pandaria, but age sometimes means it takes longer to get used to change.

The zones look really good, certainly when compared to how things looked back in the days of Outland.  I have always been a bit biased against The Burning Crusade in part because the zones did not really click with me.  Hellfire Peninsula, as a place to start, set a negative tone for me on looks alone.  The Warlords of Draenor zones so far have been stop and gawk good.  I am also a bit jealous of my daughter who has both horde and alliance level 90 characters to play.  As always, the horde architecture, in their towns and garrisons, looks interesting and exotic while the human themed alliance garrisons look rather staid and maybe a bit dull.  I might need to work on a horde alt at some point.

The lack of flying mounts has been interesting.  It has certainly put me back in touch with my collection of ground mounts and I have selected a few that seem appropriate for the expansion so far.  For example, talbuk mounts fit fight in with Shadowmoon Valley, where wild talbuk roam. 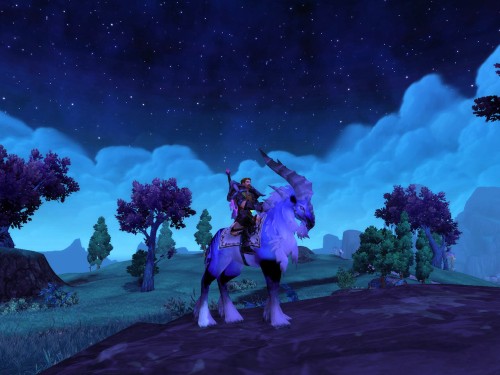 Getting back to ground mounts also exposed what having constant access to flying mounts for nearly year does to me.  I hit 90 in Pandaria with Vikund almost exactly a year ago, and at this point I have three alts there with him.

At first, navigating around the new expansion, once I was out in Shadowmoon Valley, seemed really difficult.  I was having a really tough time getting to locations for quests and such.  I was ready to chalk this up to some sort of Blizzard design flaw.  Then I went back and played Trianis for a bit, running him through the Jade Forest quests in Pandaria, and noticed I was having the same problems.  Basically, I had become so used to flying that I was automatically just heading straight towards objectives, oblivious of what the map might indicate, and running into all sorts of obstacles.

So I am back to looking at the map now, charting a route, looking for paths to follow and landmarks to use for navigation.

I have also been working on trade skills.  I managed to get all of them unlocked for Draenor so I can level them up to 700 now. 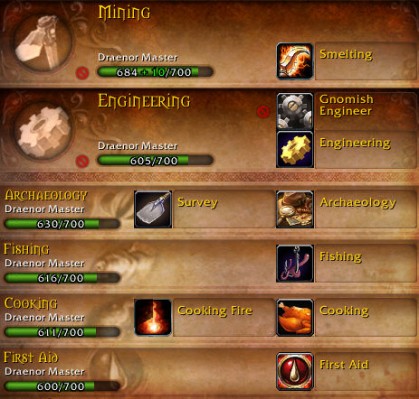 I am getting used to how trade skills work and new recipes get unlocked.  No more visits to the skill trainer.

I am way out ahead on mining, thanks largely to the the mine being unlocked in my garrison.  I upgraded that to level 2 which yielded a huge jump in ore plus there are now mining carts scattered about the mine every day to harvest as well.

I have also been dumping the draenic stone I have been pulling up mining into work orders that turn it into ore, so I am well supplied with ore for now.  I then use some of that ore to feed work orders at the engineering works to turn that into gearspring parts, the universal engineering component for Draenor.  I am saving those up for a Blingtron 5000 at the moment.

And, to my joy, I also unlocked the fishing shack, which involved me running out to do a fishing quest. 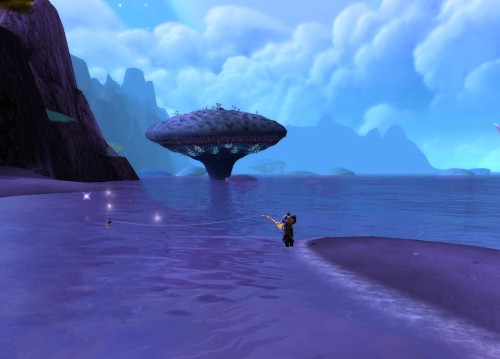 On the Shadowmoon Valley shore

There was a pond in my garrison, but until the fishing shack was built, all it yielded was junk with a value of 1 copper.  Now I can fish there.  And I was able to upgrade the fishing shack to level 2 almost immediately.

Having the fishing shack not only opened up fishing in the garrison, but also gets me a daily fishing quest so I have a reason to take fishing on the road. 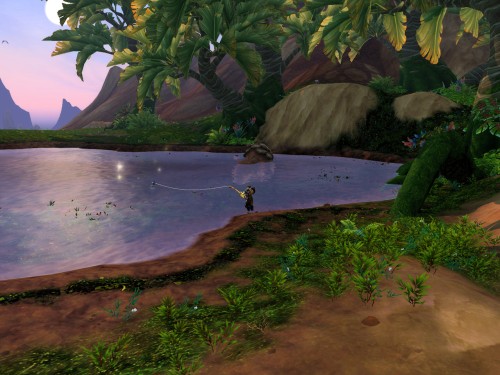 I also managed to fish up a blue quality fishing pole early on, which gives me +100 fishing skill.  A hell of a catch, and enough to make me go back to actually using a fishing pole for the bonuses.  I stopped doing that in Pandaria as you no longer need to equip a pole to do simple fishing.  But for a +100 skill boost I will trade out my weapon for a pole.  I just have to remember I have it equipped.  Last night I slowly beat several mobs to death with my fishing pole.  That won’t do, I might damage the pole!

Finishing in turn put me on to cooking.  That took a bit with the new process where by you have to collect a stack of a particular fish… anywhere from 5 to 20… before you can process them to extract meat for cooking.  The reagents bank tab on Vikund is now filling up with partial stacks of various fish. (Also, I am about ready to purchase a second reagents tab.  I love the concept, and it is the one place where I use the sort button religiously.  But I am a pack rat and the damn thing is nearly full already.   Am I going to have to wait until the next expansion for that.)

Cooking the basic recipes gets you new recipes, but I am now waiting for some recipes to take advantage of some of the meat I have stocked up in the reagents tab as well.  It all comes down to bag and bank space again.

So despite my uncertainty as to how the whole garrison thing fits into the world, it is keeping me busy and engaged.  I am also keeping my followers busy, though it looks like I need to take some care not to focus too much on leveling up a specific follower, as the highest level follower seems to drive the level of missions you get to run.  With a level 97 follower I realized that I needed to use the two level 92 followers in my pack lest they be always at a disadvantage.

Overall, the whole expansion has been good for me so far.  I am enjoying it even if I only feel compelled to move forward slowly.  There is lots to do, but I haven’t seen anything yet from Blizzard to indicate that we won’t be hanging out in Draenor for another two year stretch.

5 thoughts on “Moving Slowly in Warlords of Draenor”