Today looked like the day I would be able to really test the reformed computer.  Over the last couple of days there had been much hurffing on Jabber about a big fight coming today.  After taking LBGI-2, N3 had been pushing on the Y-2ANO, the gateway system between Delve and Fountain to the point that there was the potential for a final timer fight.

Losing that system would have been annoying, so the call was out for maximum pilots.

More than 1,200 pilots showed up.  Eight fleets were out roaming space.  And there was preciously little fighting going on.

N3 declined to show up, the numbers stacked against them.  So a few of the fleets went to Fountain and began cleaning up SBUs, reinforcing hostile staging towers, and basically pushing back on a lot of N3s work.  Such is the way of sovereignty warfare.

I ended up in Papusa’s Tengu fleet, flying a Scimitar.  We sat around while everybody else started the long drive to Fountain.  It felt a bit like we were being left behind.  We proceeded about the northern front to knock off hostile SBUs that had been dropped in some of our systems in the north and generally act as a deterrent to anybody who thought perhaps the cat was away.  A 250 ship Tengu fleet is a force to be reckoned with.

After about four hours of that, we arrived back in our starting system and felt like the lucky ones.  The fleets that headed off to Fountain from Deklein were still busying shooting structures while we were done for the time being.  I did not get a chance to test my computer setup against an epic scale space battle, but that was probably a good thing.  I spent quite a bit of time during the fleet just trying to get the fresh install of EVE Online configured the way I like it.  So many check boxes and settings.

I did get to start building up my screen shot library again.  Here are some pictures from our day out. 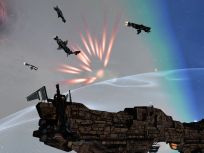 A bridge out to our first target

Piling on an SBU

My Warrior II adding its firepower to the shoot

We did some anomalies along the way 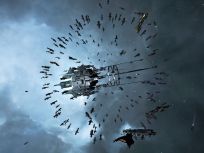 Waiting on a gate