I managed to finish up the cloud mount quest line in Kingdom of Sky fairly early on over the weekend.  As a tour of the expansion, that worked out pretty well.  You end up seeing most of the various sky islands and some of the key locations in the expansion.  Some of them, like the Sanctum of the Scaleborn, are heroic level, but with a healing mercenary in tow, following Sigwerd around, that worked out well enough.  Heroic mobs were manageable, even if I got an add.

I skipped every other quest I ran across, and sold all of the collectibles I picked up on the market, fearing I wouldn’t be there long enough to complete any of those collections.  That meant, in addition to hitting heroic mobs, I was also a bit behind in levels.  Again, a healing mercenary solved that problem and I was able to run the whole thing down, even the couple of rather awkward jumping segments.

And at the end of the quest chain there was a huge pile of loot.

That pile of treasure has no relation to what you actually end up with, but it certainly helped mark the spot.  What you do get is a small amount of gold (at least relative to that pile), experience, a decorative dish with some gems on it for your home, and the cloud mount itself. 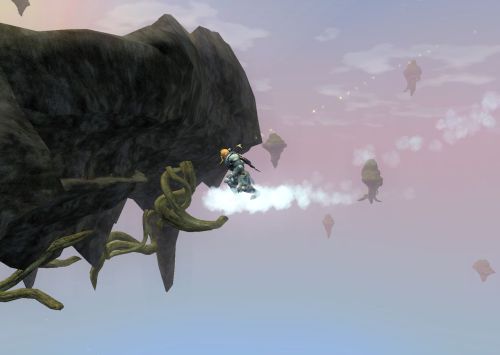 The cloud mount doesn’t actually fly, except when the quest delivers you back to your start point.  It is just a ground mount that happens to look like you’re riding on a cloud.  Certainly better looking than some mounts in Norrath.

The setup to a “frog in a blender” joke

And you can turn it into a house item, which was my immediate plan. (Though wait until you get back to your house to do so. If you convert it to a house item when the quest gives it to you, you end up stuck on a branch sticking out of the side of a floating island with no way back.)

Then I discovered that the cloud mount had one attribute that distinguished it from other ground mounts.  It applies the feather fall effect to you, which means that when you ride off a cliff you glide gently down to ground level, in a way reminiscent of the Fae glide trait back when Echoes of Faydwer launch, before it got reworked, normalized, or otherwise nerfed.

So I decided to keep the cloud mount and make it my default, though because even mounts have appearance slots in EverQuest II, I was able to keep my horse as my mount look.  It just so happens to be a magic, gliding horse now.

All of which left me at level 66 and ready to head into the Rise of Kunark expansion, which kicks off in the Kylong Plains. 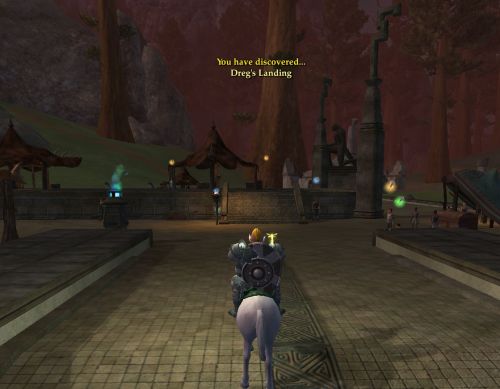 I am pretty sure I landed at the dock with another character way back in the day just to see it, but with RoK mostly being a level 70 to 80 expansion, I had not gone any further.

First pass at Rise of Kunark.

I was curious to see how difficult things would be for me at level 66.  In KoS being under level wasn’t a big deal against normal mobs, and a few adds didn’t really matter.  But Kunark had something of a reputation for difficulty at launch, due to the fact that SOE invited high end raiders to the beta, all geared to the teeth with skills at master quality, who then complained that the whole thing was too easy.  So SOE cranked up the difficulty a few notches, and when it went live people without epic gear and master level skills died in droves.

And while I am sure the whole thing was dialed back at one time, there is clearly a step up in difficulty still when moving from KoS.  Mobs of the same level and rating (as indicated by the bizarro world bars and horns and points that surround the name of the mob) were push overs that you could tackle in groups of three or four in KoS were tough fights in RoK.  An individual mob was still not a huge deal, but adds could be problematic, so I took to keeping my healing mercenary out at all time just to be safe.

That made bypassing mobs a bit of a chore, as the mercenary tries to follow your path, but inevitably aggros some mob you carefully threaded your way past.  I had the merc set to defend itself, which meant that it would stop and engage, to the point that I would ride straight through a series of mobs, the engage the last one in the pack, because that would make the merc come and assist me, at which point we would then clean up whatever else he had manage to aggro.  That got a little bit easier when I found the switch to toggle off the self defense option.  He would still aggro things, but at least he would stick with me.

And I did spend a lot of time running around.  Kylong Plains is a large, open, sprawling zone in the grand old EverQuest tradition, which is appropriate, as it is an attempt to recreate a few zones from the original Ruins of Kunark expansion. (As opposed to some zones, like Lesser Faydark, which feel almost claustrophobic in comparison.)  It is also very much a product of 2007 MMO thinking, with a few quest hubs that tend to hand out a bucket full of quests which mostly involve killing things.  Then you have to figure out what order you’ll do them in.  Meanwhile, each quest giver has no compunction about sending you half way across the zone, through various belts of this or that flavor of hostiles, in order to slay a dozen or so specific mobs.  And then you travel all the way back to the quest giver, only to have him turn you around and send you out even further for the next step.

There was one quest, connect the dots or some such, where I ended up in crossing mountains and following trails to the furthest reaches of the zone, only to get to the end and have the quest tell me to go back and report to the NPC who gave it to me.  At that moment, looking at the map, I noticed that there was a flight point nearby.  So I ran over to that only to have the flight point NPC tell me that this sure would be a handy place to hitch a ride on a sokokar, the flight mob for the zone, if only I had one.

I hadn’t finished up the quest chain to enable the flight points yet.  So it was going to be a long ride back to Dreg’s Landing.  I chose to just recall to New Halas and take the teleport orb thingy back to the start of the zone.

For all of its 2007 nature, it isn’t a bad zone.  While huge, it is chopped up into a couple of smaller environments, so you go from rolling green plains to browning foothills to icy mountains and caves, complete with yeti.

I managed to hit the end of one quest chain, which directed me to the next zone, the Fens of Nathsar.  I headed there to follow the quest to go talk to somebody, and promptly ran into a couple of heroic level mobs who were enough to do in my mercenary and I.  We could handle a single such mob, though it was a tough fight, but an add would do us in every time.

After a couple of such runs, during which a wandering add would always do us in, I decided maybe I needed to finish up the Kylong Plains before heading on.  On the way back there I managed to hit level 70, my first EQII character to make that adventure level.

And that is where I left it at the end of the weekend, having run out of bonus experience twice and with a couple days left on the countdown for my once a week reset via the orb of concentrated memories. (Which was a veteran reward, but which I see you can now buy with loyalty points from the right vendor, along with every other veteran reward.)

I was glad to see that SOE finally fixed the ranged damage timing… sort of.  Back in the day, when you shot your bow at a mob, the animation would start, the mob would take damage with numbers flying, and then the arrow would make its journey.  Now the damage number wait until the arrow actually hits the mob.

Granted, the mobs health bar still shows that it has taken damage before the arrow lands and the damage numbers pop up, but at least it is somewhat less immersion breaking.

I was interested to see that they have apparently removed the skill restrictions on harvesting resource nodes.  EQII has, in the past, been pretty strict about enforcing the skill level required for harvesting, and I have generally had to go back to some earlier zone to catch up one skill or another.  However, I tried harvesting a fishing node in Kunark and found that, even with a skill level of 52 (fishing is always the first skill to fall behind for me, as fishing in EQII sucks) I was able to at least attempt to harvest, and got skill ups for doing so.  So I can at least catch up a skill in the current zone even if it mostly fails to harvest. (Which is actually okay, because then I can use a node for more than its three harvests.)

Finally, while I have seen some comments about how much work it will take people to move their trade skills from level 95 to level 100, actually getting to 95 from the mid 80s seems to be pretty quick.  I only did the Frostfell daily (48 recipes) four times and a few rush order trade skill writs and suddenly I was level 94. (And out of bonus exp twice as well.)

And, with the current double status event going on for members, I also piled on a good deal of status along with the double Frostfell tokens.

Level 94 and a pile of status

That, along with Gaff dumping some status into the guild hall escrow account means I should be able to keep the guild hall open for a while without spending too much time working on status.  I should have enough to last until this particular nostalgia binge wraps up.  Meanwhile, I am finally into an expansion I purchased seven years ago.

3 thoughts on “Riding in the Kylong Plains”