Finnerty shook his head. “He’d pull me back into the center, and I want to stay as close on the edge as I can without going over. Out on the edge you see all kinds of things you can’t see from the center.” He nodded, “Big, undreamed-of things — the people on the edge see them first.
― Kurt Vonnegut, Player Piano

CCPs “every five week” expansion march continues as the Proteus expansion drops today.  I get the feeling that this might be a holiday hangover release as up to the end of last week the expansion page itself was a placeholder and dev blogs haven’t exactly been as prolific as past launches.  There was one about the next round of module revamps while the only other one was a summary post that included items in progress for the future.

The image for Proteus

The content of Proteus feels a bit light, at least in comparison to the Rhea expansion of five weeks ago.  But Rhea not only got in some big things, like new ships, new space, and a new rendering system, but also a few probably not difficult to program but very popular with the masses changes like the expanded skill training queue and the end of clone upgrades.  (Plus I think CCP needed something to counter the grumbling that surrounded the the Phoebe jump fatigue changes.)

After that Proteus was probably destined to be a bit of a let down in comparison, a situation not helped by a couple weeks of holidays in the middle.  But that is bound to happen when you go with the sort of release schedule CCP has set for themselves.  Not every train leaving the station is going to be full.

What does Proteus bring?

There is the revamp of recon ships, which I understand is a big deal to a small percentage of our fleet composition.  They are all getting buffed as well as disappearing from the directional scanner.

There is a new model of the Exequror cruiser, making it more symmetrical.

Related hulls, including the Oneiros, a ship I fly from time to time, will get the symmetrical update in a future release.  So for now I will remain off balance as usual. 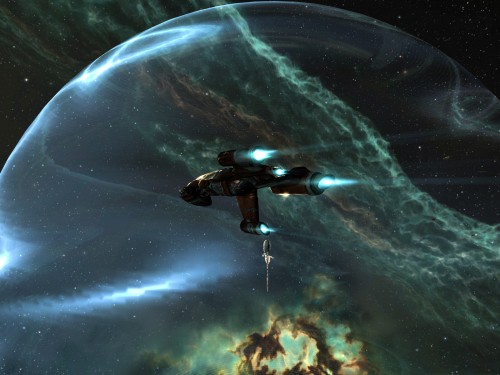 Oneiros at a Cloud Ring POS

There are also new exploration sites, which expands a feature I have never explored, new asteroid field graphics, which mean new screen shot opportunities for my other site, new player mining locations, which would interest me if I still mined I suppose, updates to the map, new languages for Aura, and then the latest round of module tiericide (or “tier side” as somebody’s spellchecker at Massively probably insisted) which just makes my brain hurt.  Most of those modules… mining lasers and upgrades for example… do not affect me at all, but others are on fleet doctrine ships.  Is my fit going to work when I get home from work?

We shall see tonight I suppose.

Anyway, that is what we are getting for the Proteus expansion.  There are always the patch notes for the expansion if you want to get into the gritty details.

The next stop is the Tiamat expansion, due out on February 17th.

Until then we can enjoy the Proteus theme, which has a spooky air to it.  Perfect for roaming alone in a recon ship.