Way back when, I bought the EVE Online Second Decade Collector’s Edition… and then CCP gave me a copy about a month later.  Comedy always finds me.

One of the items that was part of the whole big box of stuff was the Mystery Code, printed on the back of a piece of black plastic. 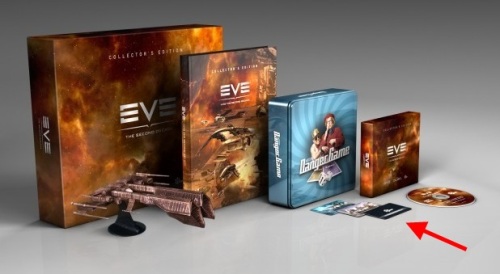 The Mystery Code, when entered, gave you a PLEX, a few special items, and the promise of more special items in the future.  Free stuff… for only $99… or free if they gave you a copy… or if I gave you my extra code as part of a contest.

Just this past week, CCP put up a note saying that there was some new special stuff for Mystery Code holders.  So I immediately went and tried to figure this out.  But since this is CCP, the process was somewhat… Icelandic?

Okay, the first thing you have to do is go to account management and claim your items, which is done by logging in and going to the “Vouchers” option under the “Services” menu, despite the fact that no vouchers of any kind are involved.

There you can pick your items to claim.  As it turned out, I had several items as I had never been to that option in in account management before, nor did I even know that it existed.

The new gifts for Mystery Code holders consisted mostly of clothes, something that disappoints children at Christmas and the perennially grumpy the rest of the year, but which was fine by me.  I am against CCP spending resources on walking in stations, but I still believe that your in-game avatar is important.  And while I would prefer hats, which you could actually SEE on people rather than, say, shoes, where you have to click, and click again, and then click a third time, and then resize a window, and zoom and rotate in order to even recognize that a shoe was even present, much less updated, I refuse to get too bent out of shape at CCP working apparel that is off screen 99.9% of the time.  More pants, more shoes, more whatever.  The people doing that probably are not working on null sec sovereignty fixes in any case.

From there I had to log into EVE Online and, at the character select screen, redeem the items by dragging them from the bottom of the screen onto the character to which I wanted them to go.  After that I logged into the game and saw that I had a bunch of clothing items in my hangar in the station.

And I did not have a clue what to do with them.

Seriously, the EVE Online interface strikes again.  You can see these items of apparel in your hangar, but no amount of clicking on them, dragging them around, or getting info on them will tell you what to do with them.  Seriously, they tell you the amount of physical space they take up, but nobody could take a minute to paste in some text that says “Go to the character editor to use this!”

Where CCP fails, Google provides.  A quick search pointed me at several forum threads where people had asked the same “what do I DO with these clothes” question, which sent me to the character editor.

Somewhere along the line I missed when this button showed up amongst the station services.

Of course, all the buttons look different now

But there it was, and it brought up the full fledged, create your character editor.  That, in turn, allowed me to change all manner of aspects of my avatar, something I thought they were charging for at one time.  The character editor also told me I was owed a “resculpt,” which I am going to guess is the “start from scratch” option when it comes to your avatar.  Maybe that is was CCP was charging for… only they seem to be giving me one… because the first one is always free?  I don’t know.

Anyway, when you are in a station and in the character editor, then clothing items that are in the hangar of that station show up as choices amongst all of the standard selections.  I went through and picked out what looked to be “new” items and selected them to be added to my avatar.

After that I had to go and take a new portrait so that my change of clothes would show up in-game.

Wilhelm, before and after

I am not sure that is much of an improvement.  But for most people my avatar will only show up as a tiny little square in a station list or chat channel. (One of the bigger shocks of watching people stream EVE Online is seeing how many people leave avatars on in chat.  The first thing I do when I open a new channel is turn off the avatars and set compact members list.  Maybe it is years of playing MUDs, but I do not need a tiny, indistinguishable picture next to somebody’s name in order to recognize them… I recognize the name.  Also, so many blinking chat tabs… you know you can turn that off, right?)

Of course, it turned out that these were not the new clothes I was looking for.  This was another set we got handed at some point for some reason… I don’t know… they were in my hangar as well.  The new set we had been given were dark, padded psuedo-combat armor style.  Oh well.  I might go back and change all that later.  And now I need a hat for the new avatar if I am going to use it elsewhere.  That requires old school Photoshop capabilities rather than anything in the game.

But having gone through all of that just to put on some new clothes… and you cannot even see my pants… a few thoughts jump out at me that might smooth out the process should CCP be taking this whole dress up thing seriously.

The last two I think are especially key if CCP has some plans to make money selling people clothing so they can dress up their avatar.

I know that the last one breaks the “rules.”  In EVE Online, the fact that things have to be moved around, that there is no magic in-game bank or mailbox to deliver ships or modules or ammo to me no matter where I am is an important part of the game.  If nothing else, anybody who does a region-wide buy order in Domain should be made to feel the same pain I did a few years back.  I still haven’t picked up all those light missiles.

But I don’t think clothes really play into that.  What hat my avatar is wearing on a given day has no impact on the core game play in EVE, be it combat, hauling, mining, production, or playing the market.

So I think CCP ought to round up all that clothing I have left strewn about space and put it together in a nice little wardrobe tab as part of the character editor, so if I feel like wearing my Quafe T-Shirt when I am out in Immensea I don’t have to worry that I might have left it behind in Deklein or Jita or Amarr.

Of course, ideally I should just be able to go to the New Eden Store, buy a new hat, and be able to apply it immediately without having to go through the rigamarole of playing with the full character editor and all the positioning choices and what not.

I see that CCP is giving this some thought on the whole ship skins front, which says to me that the process is more convoluted that people are willing to work with.  We shall see if that gets translated over to the apparel side of things, because I would still like to be able to buy me a decent hat.