Back when I first really got into World of Warcraft, I dove into the who addon thing pretty heavily.  The UI at the time was even less flexible than it is now (though I am sure that isn’t saying much for some) and there were so many options and things to be improved and so on.  I filled my plate to overflowing at the addon smorgasbord.  I even had addons for things like WoW Census to help them get play counts.  You can go hog wild with addons and end up with a very different looking version of the game. 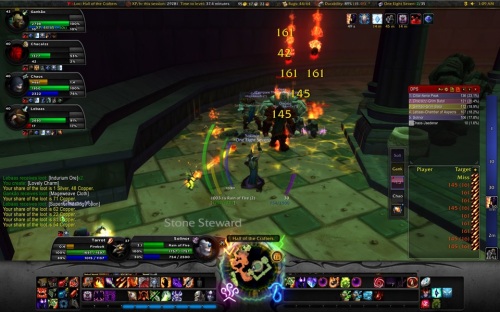 Hey, I know where that is!

And then the reality of addons began to hit.  Some of them were buggy or leaked memory or conflicted with other addons.  There was the usual nightmare of patch day when everybody needed to update their addons, whether or not they broke due to some change.  Finally, long term support for addons has always been a bit dodgy.   Somebody who was enthusiastic addon developer one day was likely just to walk away from their projects the moment they stopped playing WoW.

Addons became a pain, which wasn’t helped when Blizzard made it clear that you couldn’t charge for addons or solicit donations for them in-game.

Around the time of that big quest tracker addon I changed my tune on the whole addon thing.  I was going to be an addon minimalist.  By that point Blizzard had improved the game enough, often by incorporating the functionality of some popular addons directly into the game (to the annoyance of some) that I did not feel like I needed as many addons.

I cut my addon count down to the bare minimum.  I think at one point I only ran Auctioneer, because knowing the market value of things is too useful, and one damage meter or another, just to keep myself aware of how I was doing.  In addition, I limited the potential pool of addons to those supported by Curse, since they make updating easy.

Over the years since then, my addon count has crept up slowly.  I have added and remove some, but the really useful ones persist.  So my count as of today is 8 addons.  They are:

Auctioneer – This is my market tracking addon of choice, and probably my one absolutely essential addon.  There are other options in this category, but I have stuck with this one out of habit as much as anything else.

GTFO – I picked this up when I did the LFR’s in Pandaria to ensure that I wouldn’t be “that guy” standing in the fire or what not.  It basically plays audio alerts when you are standing in the fire, ooze, or other zone of impact so you know to get out.  Very helpful as a melee DPS player where your view of the world is often restricted when standing next to a giant boss.  Probably less necessary when ranged, but still nice.  Several people in our weekly group run this, including Earl who runs the sound through his speakers and Skype through his headset, so I can hear when he is standing in the fire during a fight.

Master Plan – Makes garrison missions more manageable, lets you assign the optimum followers on your team to a given mission, lets you complete all outstanding missions with a single click.  Not absolutely indispensable, but I would want to try and run five garrisons without it.

PetBattle Teams – Suggested by several people and mentioned in my post last week about pet battles, this really helps to overcome the limitations of the pet battle interface.  I am not sure I could really be serious about pet battles in any way without running this addon.

Pet Tracker – I may have mentioned this in passing last week as well, this fills addon in a few more of the blanks when it comes to pet battles.  It lets me know in a battle if any of the pets I am facing would be an upgrade over what I have already caught, including if I do not yet have a given pet.  It also gives a readout in each zone of available pets, which ones I have left to catch, the quality break down of those pets in my collection, and where any uncaught pets might be found in the zone.  This is all stuff I could look up on the web, so not indispensable, but still very nice to have.

My Rare Finder – Also just Rare Finder, I picked this one up one night when we were out hunting rares as a group.  It just puts them on your map so you know where to look for them.  Great if you are obsessing about rares, but I feel like I could remove this one.

Recount – What looks to be the most popular damage meter on Curse.  Certainly, at 64 million downloads, a lot of people have tried it.  Mostly used to just see how I am doing.  I never throw numbers around these days.

Tiffy’s Junk Seller – This isn’t even up on Curse anymore, so I might need a replacement some day.  This was somebody’s addon test project, and it basically sells all of the gray quality items in your bags when you open up the vendor interface, listing out what it sold and how much it totaled up to in the chat window.  Almost essential in WoW, where bag space is at a premium on any character I play regularly.

And that is my list.  It is probably a very short list compared to some, and no doubt extravagant compared to others.  I have had other addons around at times.  I used to run Gatherer until Warlords of Draenor put all my gathering needs in my garrisons.  When I play as a healer I run Healium, though I haven’t done the healing thing for a while.  I also was running an addon that would show the X,Y coordinates of positions on the map, but it broke with 6.0 and I haven’t really needed it in Draenor, so I haven’t bothered replacing it.

What is your view on addons?  The minimalist approach like mine, where I am always trying to pare them down?  Do you go full bore in changing things up?  Or do you ignore them altogether?