This is not a TorilMUD or Forgotten Realms post.

This post goes nowhere near Baator, just a couple exits past the Astral Plane, home of the five headed queen of evil dragons and eternal foe of Bahamut.

No, this is about EVE Online.  Today CCP is launching their second EVE expansion of 2015 and… I am not sure I have digested what we got from Proteus just five weeks back.  But hey, more stuffs!  So welcome Tiamat!

Tiamat in a picture

And what does Tiamat hold for us?  Well, we have a new ship, the second of the Tech III destroyers announced way back at EVE Vegas.  This is the Minmatar version, the Svipul, a ship that has had an interesting life. 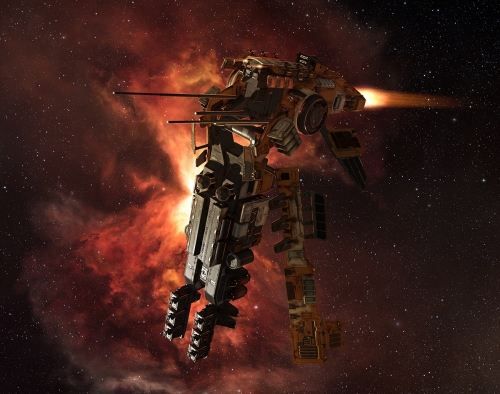 The first thing people wanted to know was how to pronounce that name.  I think it got settled down to something like “Swee-pull,” which almost rhymes with “Weeble,” which is amusing because it looks like the drive placement on that ship will make it wobble.  As to HOW people will actually say it on coms… well, people can’t get Scimitar or Rokh or Chimera right most of the time, so I expect to hear some interesting variations.  Or I expect it once the ship becomes more than just an expensive new shiny and finds its role in New Eden.  Call it 18 months before the ship’s name is being regularly mangled in voice coms.

Then there are the Drifters who, if there were any musical justice in New Eden, would fly around in rifters.

But they don’t.  They appear to fly ominously smooth ships with a hint of manta ray in their design philosophy.   They join the Circadian Seekers in wandering New Eden… I think… I have to admit I really wasn’t paying attention when they got announced.  Anyway, there are also mysterious structures involved that continue the CCP belief that such encounters in space should be called “dungeons.”  Seriously, I thought they got over that a few years back.  But no, it is right there in the patch notes.  Anyway, the Drifters have arrived and they have already killed a carrier.

CCP is also revamping corporation tools which is one of those “why has it taken you this long to get around to this?” sorts of things.  If you have ever formed and run a guild in any MMO, doing the same thing in EVE by starting a corporation… will possibly drive you insane.

I know, I know, you don’t really need a degree in systems analysis and organizational management to configure a corp in EVE, but it sure feels like it the first time you open up that window and try to configure roles.

Possibly the most sensible role set I have ever seen

It is like so many things in EVE, mind boggling when you first look at it, not so bad once you have figured out how it works and the odd idiosyncrasies.

And, if I read things right, NONE of that is changing.  The learning curve remains intact.  But you can now have 5,000 people in mailing lists and “Add rich, colorful text and hyperlinking to your corporation details.”  So go team!

There are some updates to graphics and lighting.  Structures got an update pass.  Light will now reflect off of things, so if you’re near a large, well lit gas giant, your ship should be lit from the reflection.  That should make for some better lit screen shots out in the dark depths of null sec.  Also, there is now a lens flare slide, so you can set just how much New Eden should feel like a J.J. Abrams movie.

There is also a pass at projectile weapon balancing, another round of module tiericide to confuse me, and upgrades to sound.  EVE has sound!  Well, it has music at least, and no expansion would be complete without its own theme.  It feels a little generic techno, but it works as part of the New Eden mix I guess.

Anyway, CCP has announced that Tiamat has been successfully deployed.  Thanks to my location, updates generally happen while I am asleep.  Here are the various posts related to the release which, if true to CCPs current plans, don’t tell you everything.

Coming up next, Scylla on March 24th.