And eight such links for eight such ops wouldn’t be a problem at all for me… if there was a war going on or if the Reavers were deployed behind enemy lines.  I’ve gotten eight over a weekend under the right conditions.

However, there is no war going on currently.  The Reavers are all back in their home systems waiting for orders.  And hanging on a gate with some buddies trying to grab a couple kills via hapless passers by do not count.  You only get participation links for fleets that have been broadcast alliance or coalition-wide over Jabber, are led by an anointed fleet commander, and gets a minimum amount of participation… the number 10 has been bandied about… before before the operation can be given a participation link.

And, honestly, I’ve been a bit busy so far this month (you can tell I’m busy because I start writing about games as opposed to about actually playing games… which usually means I am not playing much…) so that as Sunday hit us, and the promise of a corp meeting, I had zero participation links for the month of March.

So I figured I had better get on that if I didn’t want to be evicted from null sec!

I was online and in coms 2 hours before the corp meeting… because my brain couldn’t quite remember how daylight savings time worked… and I had been doing bad things to my brain the night before.  So I had some trouble working out that “spring forward” meant that EVE Online time… which runs on UTC… would actually be earlier and not later.  It seemed a lot more complicated before I had some caffeine.

Anyway, the meeting was at 19:00 EVE time and there I was logged in and on coms at 17:00 and wondering why nobody was saying anything about the corp meeting.  I probably scared some of my corp mates as I am pretty sure that me being on TNT coms, in the corp channel, when there isn’t a corp meeting or event is one of the harbingers of the apocalypse.  I don’t spend a lot of time playing with my corp.  Anyway, we can now add “or its the start of daylight savings time” to the list of possibilities.

There I was, feeling a bit silly, realizing that the meeting wasn’t for a good two hours, when somebody dropped into our channel asking for more people to join a fleet that had just been broadcast… a fleet I had opted not to join because we had a corp meeting.  Well, I figured I had better get in on that action so I would show up to the meeting with at least one participation link in hand.

The first thing I had to do was get where the fleet was forming up.  I was logged in and sitting in Amarr space in my training implant clone, so it was time for a clone jump.  I paused my training queue… please removed to start and stop training queues in order to clone jump on the list of things to do CCP… and started rummaging through my clones looking for the one in the system closest to the one we were forming up in.  The winner appeared to be the clone I still had sitting in VFK-IV.   The one I actually clicked on however was the clone in XS-K10, at the north end of Immensea, just a couple of jumps from B-R5RB.

Well, I wasn’t going to make that fleet.

I had a clone in XS-K10 because for a brief bit of time we were helping some Russians in their conquest of Northern Associates rental space.  The last time I was down there, The Initiative owned the system.  However, I only ran a few ops there before the Reavers were called up to start hitting things at the other end of NA space in order to provide a distraction.  That apparently did not help enough as The Initiative collapsed and lost their holding in the region.

So there I was in the middle of hostile space with a Basilisk and an Ibis.  I put the Basilisk up for sale on contract at a bargain price so as to at least extract a bit of ISK from a ship I would probably never return to claim and then mounted up the Ibis and set a course for home.

And it looked to be a bit of a trip…

I have developed an aversion to self-destructing.   I would rather risk an impossible run and go out in a blaze of something akin to glory than sit there and watch the self destruct timer run down.  Also, content creation!  So I set my destination and started flying towards home, pretty sure that I would find somebody along the way to speed up the process.  And what the hell, a pod doesn’t cost anything these days, and who cares about losing an Ibis.  I have too many of the damn things sitting around already.

An Ibis loose in Immensea!

I made it as far as Catch when I got caught by a drag bubble behind a gate… how does that even work, putting a drag bubble 20km behind your landing point and somehow you get pulled into it, how does the lore explain that… and got popped by a solo camper.  I was afraid I was going to make it all the way to HED-GP before that happened, space in the area being exceedingly bare.

Unfortunately my death clone had been set to XS-K10.  I tried to check that while I was there, but since I couldn’t use station services that was out.  But at least EVE won’t drop you back in a hostile station when you die.  Instead it put me back where my clone was originally set way back in 2006.  It put my at the Caldari Navy Assembly Plant and Jita Planet IV Moon 4.  Jita 4-4, the center of the known universe.

There was a time when that was where the Caldari new player experience dumped you.  Your first real agent was right there at Jita 4-4, which I am going to guess is how that because the most popular station in the entire game. (Also, back then, started a Caldari gave you a leg up with a few combat skills, so it was the default choice for many people.)  I remember when I finally moved away from Jita and set up shop in Hageken.  I felt like I was out in the freakin’ wilderness.

Anyway, I was closer to home and, if nothing else, at a station where I could equip myself for the run back.  I fitted out a Crow because that happened to align best with my skills, undocked safely, as nobody is paying the Marmites to keep us under a declaration of war any more, and continued along the route home.

If I had been thinking, I would have altered my course and gone in via the “safe” route to home, through which I have dragged any number of awkward ships over the years.  Instead I just followed the shortest, most direct route.  After all, I was in an interceptor.  They are invincible, right?

I blew through some familiar low sec names, made it to M-OEE8 and saw that we had the route camped as usual, and headed onward.  Just as I the gate to E-OGL4 was prepping to send me to that system, I saw that a friendly hand in local had written, “Wilhelm Arcturus don’t jump into E-OGL4!”

Well, what trouble could I possibly get into in an interceptor, being determined to fly through as opposed to fight?  I landed in E-OGL4 and held my cloak, but the coast looked clear.  There wasn’t anything on my overview.  So I set myself to jump for the next gate home, breaking cloak and starting to align when suddenly I found myself short a ship.  There were two of those new Svipuls camping the gate and, for whatever reason, not showing up on my overview.  I had best check that.  Anyway, they were set to insta-lock and stripped the Crow right off of my pod which, thankfully, continued the transition to warp and sped off to the next system.

While losing the pod would have cost me nothing, I hadn’t bothered to reset my death clone location yet, so I would have ended up back in Jita.  Instead I was able to carry on.  The next system put me on the jump bridge network and I was able to get a bit deeper into CFC territory where I picked up a siege bomber and flew the rest of the way to my usual home in Deklein, YA0-XJ as my jump fatigue/space ebola started counting down.

That about ate up all the time before our corp meeting.  I had put myself in the AFK channel in TeamSpeak, so I pulled myself back up to the corp channel to listen to the proceedings.

As I was doing that a ping came up for a “quick op” to chase down a hostile carrier close by.  I figured I could get in on that.  It was in our staging system down in QPO-WI.  I grabbed a Harpy, got on Mumble, put myself in the No Chatter channel so I would only hear the FC, since the corp meeting was just starting up as well and I was listening to that at the same time, and flew to QPO. There the FC, Alterair Phoenix, announced that we needed more logistics so I bought a Burst… they cost less than 10 million ISK, which is pretty much a “who cares?” level of pricing… and joined the fleet as we undocked. 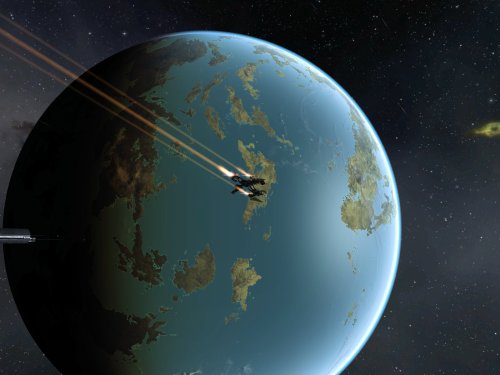 From there we headed out towards the intended targets who were, of course, on the far side of YA0-XJ.  Some times I wonder why I ever leave that system for fleets.  Inevitably I make the run to QPO just to turn around and fly right back to YA0.  It is only a few jumps, so not a big deal, but if just seems amusing.

It turned out that the carrier in question got safe, but we did managed to catch a Triumvirate Ishtar and Cerberus on the gate in E-FICO.  And thanks to somebody loading up the Burst drone bays with a Warrior II I was able to get just enough of a bite on each of those to get on the kill mails.  I don’t need a lot of kill mails, but I like to show up on the boards at least once each month to prove I am still alive.

As that was going on, our CEO listened to concerns about hitting eight participation links during a time of relative peace, so knocked that number down to four for now.  The meeting went on for a bit, focused on our industrial achievements and what might happen come the null sec phase II changes, at which time mining might get the respect it deserves given how it will impact the defense values of systems.  The fleet op wound down and Alterari Phoenix brought us back to QPO, generating a participation link for us.  25% of my monthly minimum in the bag.  And then, almost immediately, another op came up, again under Alterari Phoenix, where we chased some Mordus’ Angels ships around for a while until they buggered off for home, getting me a second participation link.

And that was about the extent of space operations for me on Sunday.  I did remember to reset my death clone before I logged of so I will end up back at home the next time my pod gets popped… and somebody bought the discount Basilisk.  So I have a bit more ISK.