I mentioned a while back that my daughter bought a couple of PlayStation 3 games with a GameStop gift card she received for her birthday.

One of them was Dragon Age: Inquisition, which turned out to be not so hot on the PS3.

The other was the Diablo III: Ultimate Evil Edition, which combined the original game with the expansion in an easy to swallow, new in box, $20 package.  I sort of pressured her on that one because I wanted to try the game out on the PS3 and because it appeared to be a hell of a deal for the whole thing at that price. 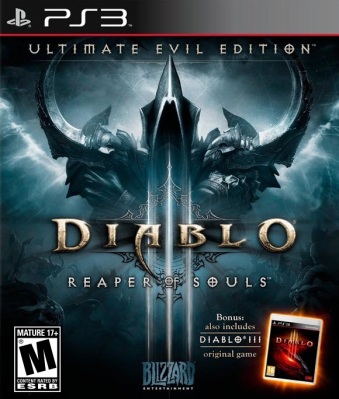 I asked my daughter to put the disk in and start it up expecting that we would be 45 minutes to an hour patching things up before we could actually play, which is part of the standard PlayStation experience as far as I can tell. Certainly DA:I was a long time patching.  But she put the disk in, launched the game, and then shouted across the house to me… seriously, what is it with teens, my wife will ask my daughter to tell me dinner is ready an she will simply turn and shout the news, something my wife could have done if that was what she wanted… that the game was ready to go.

No patching?  Runs right off the disk?  Will wonders never cease?

It is like we were playing some console game of yore!

Anyway, by the time I wandered out to the television, she had already created a character, having claimed the new crusader class, so I decided to go with a demon hunter.  I would let her go in and take the hits while I stood back and played the ranged DPS role.

The character I created was associated with my PlayStation account, however it looks like you could move characters over from other accounts.  And, of course, you could play with other people on the PlayStation network.  However, since it was just the two of us in the same room with one account, we chose the path we did.

Jumping right in, the game played very well.  It looks good on the big screen, the controls were relatively intuitive once I got used to them… and I say this as somebody who always feels awkward trying to use a gamepad to control a game.  This is helped by the fact that Diablo III limits skills and abilities, so there are not a whole bunch of options.

Each player gets their own health, action pool, and ability display in one corner of the screen.  I always have to sit on the same side, relative to the other player, as my health bar and such or I get confused.  Fortunately we were aligned correctly to start.

Combat is the same mayhem as on the PC with a few minor changes.  Lacking mouse controls to specify targets, each character gets a color coded caret over their current target so they can see what they are aiming at.  I am not sure that is totally necessary with the close-in melee classes like the Crusader, but playing the ranged Demon Hunter it was very useful.  The only problem is that fine control of targeting is a bit finicky.  I could often see who I was hitting but couldn’t really control my choice of targets.  But they all must die in any case, right?  Lacking screen shot capability, here is a multiplayer example I pulled from the internet.

And, when your characters start getting separated or when somebody falls behind, the game will put them back up with the party to keep things together.  Given our tug-of-war escapades with LEGO Star Wars back in the days, that worked out well enough.

Basically, fast and furious action just like on the computer… until you want to deal with equipment.

Here is where the whole console controller gets in the way.  You have to open up your character window… one character at a time, please… and navigate inventory, slot by slot, with the analog stick and various buttons.  Again, since I don’t know squat about getting screen shots from the PS3, I am going to borrow an image from the internet.

You can see in that screen shot all of the equipment slots arrayed about the character in a circle.  You navigate that with the analog stick, moving the focus around the clock face with a circular motion.  When you stop on a slot, it shows you what you have in your inventory for that slot. (Vendors work the same way.)  You can then compare or swap out equipment.  If you have picked up something since you last hit that window, the slot where it landed has a star over it so you know where to look.

All in all, it isn’t a bad system given the tools you have at your disposal.  And if you were playing solo I don’t suppose it would be much of a drawback.  However, if you and three of your friends are sitting in the same room playing and everybody wants to check their inventory after a big fight or some such, I could see that getting old very fast.  My daughter and I had to set some basic rules about when it was okay to check inventory.  The same interface also goes for skills, though at least you don’t pick up a dozen skills while crossing the average zone.

The only other thing I noticed during our initial games was that it seemed to access the optical drive a lot more than I was used to with other games.  Of course, this was natural as it was literally running from the optical disk.  Later on I found the option to install the game on the system’s hard drive, at which point things sped up.  We ended up playing most of the way through the first act and had a good time.

All in all, I am pretty happy with how the game turned out when translated to console.  And for $20 for both the base game and the expansion, I can highly recommend it if you have any inclination to play Diablo III from your couch as opposed to at your desk.  The main problem I have is finding a time when my daughter and I both want to play.  We’re well past the days of her waking me up on Saturday morning to play video games with her.