A move op should be the simplest of all fleet operations.  The point of the exercise is merely to move a fleet of ships from point A to point B.  There is no plan to shoot anything, no hostiles to find, and generally little in the way of doctrine to deal with, at least when it comes to subcaps.

It should be just a matter of piling in the car and driving together down the road.

Of course, nothing is ever as simple as it seems.

The fleet commander’s job in a move op is to avoid trouble.  There is no target to shoot, just a destination to reach, and the FC’s duty is to get his whole fleet there in one piece.  The FC cannot go haring off, leaving people behind, because a limited opportunity target has presented itself.  And a move fleet tends to get strung out over several systems if allowed to free burn any distance, as the speedy frigates zip ahead while the lumbering battleships try to keep up.

There were literally problems in the five jump move op from QPO-WI to YA0-XJ that I wrote about the other day, with people falling behind or not hearing the FC because they had to step away from the computer for a bio break.  And that was before there were hostiles involved.

But there is a war going on in Fountain, something Endie has summed up in a post with his usual flare. (Also, click on the gif he has linked.  It is a pretty cool view of caps landing on what looks to be the J5A gate.)  And with that there wasn’t just one move op yesterday, but many, as our coalition tried to shuttle thousands of ships across New Eden.

The trip was just 25 jumps according to DOTLAN, something that shouldn’t take all that much time, but getting there was a two hour journey.

It would have been much less back in the old, pre-Phoebe days, when people could freely use jump bridges, but jump fatigue means everybody taking gates.  And I mean everybody.

I got into the 02:00 UTC move op fleet for subcaps which was being run by Reagalan.  Another move op had just gone out, but it was a taxi interceptor fleet for those who had somebody in a carrier haul their ships out to 4-EP, or who just planned on buying ships once they got there.  But I couldn’t go with that op because I wanted to get my Basilisk out there and ready for Reaver ops, otherwise I could have just used a jump clone and called it a night.  I still have one stashed in 4-EP from the last big war in Fountain, back in 2013.

Anyway, the first order of business was to sit around and wait for a bit while people piled into fleet or announced that they were some huge number of jumps out but would be there soon.  There were actually multiple move ops going on at the same time, including a capital move op, and part of our assignment was to be there to shepherd the big ships.  A nice plan in theory, but given the kitchen sink assortment of ships I wasn’t sure what we would actually do if we faced any opposition.  Somebody was asking who the anchor would be if we had to fight, betraying that blind optimism in the idea that there must be a plan somewhere.  My thought was that if we reach a point where we need a combat anchor, we’re probably screwed.

Undocking in YA0 was quite a site, with masses of capital ships streaming out of the station and slowly aligning for their first gate.

The crowd at the YA0 undock

Of course, just the act of undocking a few fleets worth of ships put the system into time dilation.  Nothing like stretching out waiting by making time run slower!

At some point the cut was made and we were given our first waypoint on the route to Fountain and told to start burning ahead a bit. It was at the first gate that we were joined by the biggest ships in the fleet, the titans.

Titans landing on the gate in YA0

The supercaps, unable to dock, had been logging in at their home POS.  As we started moving out they had been given the green light as well and began to tag along with us, heading through the same gates.

That was a very odd sight for me.  Up until the Phoebe changes, even seeing a titan warp in system was something or a rare event in my experience.  Titans used to live inside of POS shields, using their jump drives to drop into systems to fight, then jumping back out when done.  Actually seeing a titan aligning and making their off-angle, sideways warp over and over again was something new.

Our fleet rushed ahead to the first waypoint and then waited as the capital ships caught up.  Then we would rush ahead… and even battleships feel fast when paced against a titan… to the next waypoint.  At one system I had gone through the gate and was watching the titans decloak, align, and warp off to the next gate.  I sat and watched them go and then warped to the gate myself, arriving with plenty of time to spare in order to watch those same titans finish their warp and finally land on the gate themselves.  Titans are slow.

That is what reigned in our progress, keeping our fleet from dashing ahead and wrapping things up.  We would move, then hold, then move a couple more jumps, then hold.  But the reward was getting to watch all those capital ships streaming past.  The new kids in Karma Fleet, the “just about anybody besides Gevlon and Xenuria can join” new player GSF corp were getting an eye full of special snowflake ships.  I think every supercap was represented on the way to Fountain. 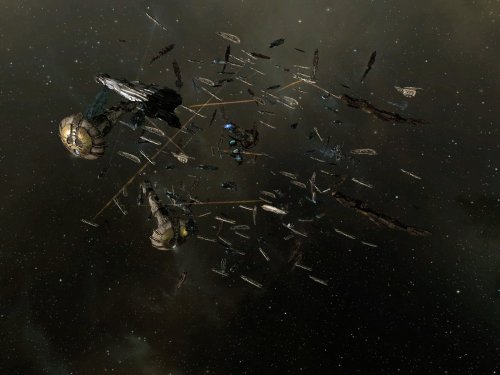 The only thing we lacked was hostile interference.  A determined group of suicide Sabers or other interdictors could have bubbled up gates and really made our lives miserable, slowing the op down to… well… even a slower crawl than it already was.  That would totally be something we would do.  I am pretty sure DBRB has run that sort of op on past occasions.  But no hostiles showed up to bother us.

There was speculation as to why they did not show, the leading theory being that elite PvP organizations do not like to die as that tarnishes their kill board.  That lead into a long dissertation on the views and attitudes of organizations like Black Legion and how the eschew ship replacement programs, lest getting blown up lose its sting.  That went on for a bit.  There was a lot of chatter on the op, to the point that it was mentioned several times that the main Euro time zone move op was not nearly as talkative.  Having run more than a few ops with our European cousins, I will say that they do show a bit more coms discipline at times, but if they are silent it is only because certain Germans have been muted or are not on the op. (Looking at Xel.)

Finally we grouped up on the last gate before Fountain, the J5A-IX gate in B-DBYQ, the old staging system from which we launched the 2013 Fountain war.  There we sat as the capitals streamed in to join us. (Okay, I am going to link that gif too, it really sets the scene well.) 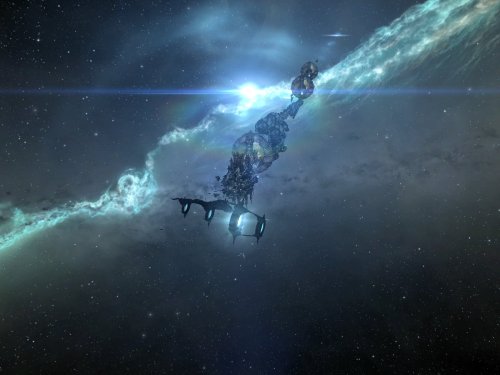 Caps landing on the J5A gate

Then it was through the gate and into Fountain.

In J5A we all decloaked and sat as the capital ships, within jump range of their staging POS and willing to accrue a little jump fatigue space ebola in order to wrap things up, activated their jump drives and streaked out of the system.  And then one of the Archons lit a cyno there on the gate in J5A.

Apparently he wanted to record the jump out with FRAPs, but had assigned the same key to activate the record option as was used for the high slot where his cyno generator was located, so there we were.  And once a cyno is lit it has to run its full cycle, which in this case lasted 10 minutes, while the ship in question just sits there. (And here is the video he took!)

That generated some lively talk about how the poor guy would have been blown up for holding up a fleet during a combat op as well as tips about keeping your liquid ozone, the fuel for the module, in your fleet hanger and only moving it to your cargo bay when you need it.

The ten minutes rolled by and eventually the last capital ship jumped off to where ever they were staging.  Then it was our turn to head out.  The plan was to take the jump bridge from J5A to cut out a few jumps.  But then it turned out that one of the Domi pilots in the fleet had about five days of space ebola on him, so we opted to spare him further jump fatigue debt and just ran the five gates to 4-EP.  There was a small gate camp along the way, but when 160 ships land, that sort of operation tends to scatter.  We left no stragglers for them to catch, and were soon landing on the station, which had been put into reinforce.

Landing on the station at 4-EP

That is the shield timer running down, just the first event in the Dominion sov station taking lifecycle.  And when the time gets close, we will just undock and hold the station, it being our staging system and all.

Once docked up I remembered to set my death clone to the station, so when I get blown up I won’t have to make the trek across space yet again.  Fountain is an active war zone with hostile gate camps all over.

I also went through the stock of ships I still had sitting around from the last time we staged out of 4-EP.

I think the Scimitar might be useful, if it is fit correctly for Tengu fleet, and the Basilisk I brought is correct for current doctrine.  The rest of the ships on the list though represent more of a history than anything else.  I actually thought I lost that Hurricane on an op ages ago, but I guess not.

That was it for me for the night.  Op success, everybody moved safely, and it wasn’t even a trail of tears.  But, then, we didn’t have to go all the way to Delve either.  And now in position to join ops as they come up.  The war is on.

Meanwhile, here are some of the screen shots I took on the way to Fountain. 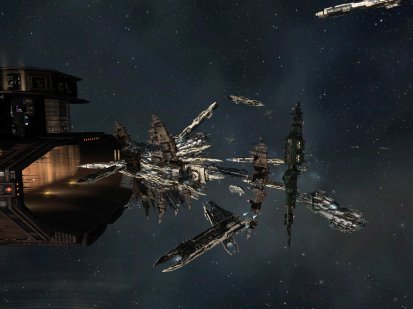 Spewing out of the station at YA0 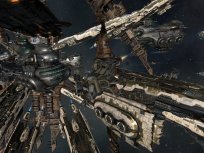 The crowd at the YA0 undock 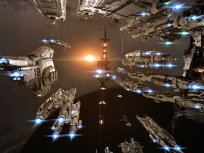 Warping my Basi through a tunnel of Amarr caps

Titans landing on the gate in YA0

My Basi in warp

Aligning after a gate jump 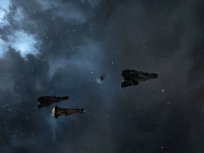 All flavors of titans on display

Caps landing on the J5A gate

Capitals jumping out of J5A at the end of the op

5 thoughts on “Heading to Fountain – The Chaos of Move Ops”