I am pretty sure that EVE Online players have been talking about their desire to customize their ships for as long as the game has been around.  Probably the most visible icon of this… dare we call it a movement… is the Hello Kitty Kestrel.

You would fly this, I know it

That, of course, is an extreme example to make a point, something you would never expect to see in-game or in real life.

(photo from the Deviant Art portfolio of no5master)

There is always some desire to stand out from the group.

Red beams because I want to be different! Also I was bored.

Of course, the specifics as to how any individual wants to stand out is all over the map, so I am not sure CCP has had an easy time getting to where they are now, nor do I believe it will please a very large percentage of the population of New Eden.

But at least we’ve got something.  And that something is ship skins.

CCP launched that plan a little over a year ago with skins for a few ships and what felt like a convoluted… and somewhat expensive… process to get them into the game.  It was about $2.00 to get a skin on a frigate through the manufacturing process, at which point the skin was expended and now a permanent part of the ship.  If the ship blew up… and frigates blow up with alarming regularity… the skin was gone.

Due to the price as much as anything else I would guess, the skins did not see a lot of use.  Well, I didn’t see many of them, though that might be as much because of another issue I’ll get to later.  In the end it seemed to become more of a PLEX alternative, a way for some to turn real world cash, used to purchase Aurum which in turn could be used to purchase the skins, into ISK by selling skinned ships for a premium in Jita.  Not a bad thing, but not much mass appeal in that either.

CCP has tinkered with the system a bit and added some new skins.  The dread skins that came in with Rhea are probably the ones I see the most.

How could any Goon pass up a Fat Bee Moros?

But CCP announced a big change to the whole ship skin thing this week with a detailed Dev Blog on the topic.  The essence of of the change is that skins will now be bound to your character rather than a ship.

Skins tab in the character sheet

So if you have a permanent skin (and all previously purchased skins will be permanent) you will be able to apply it over and over to ships as you lose them or swap.  Also, there will be temporary skins that will have a 30 day duration.  And you will be able to swap skins in space, barring a few activities like when you have a cyno running.

This is in conjunction with a slight change up to Aurum packages and the list of current and new skins that will be available with next week’s Mosaic expansion (it should have been called Charybdis to go with the last expansion, Scylla) led at least one player to tally up how much all these skins might cost the avid collector.

@MakotoPriano @HLIBIndustry I was only counting the new ones. Total for all SKINs at new prices is $1570.12 (@CCP_FoxFour did the math)

Nearly $1,600 in skins if you straight up buy your Aurum for real world money at the best possible rate.  More than I would want to spend.  But then I have the problem that, even with more than 100 skins lined up for release, there are very few that apply to ships I fly.

Some ships have just been ignored.  In what reality would you have somebody work on a skin for the Ferox, but leave the ever present Drake on the sidelines? (Okay, they had a Guristas skin to work with already, but still.)  And the Tech 3 cruisers like the Tengu, with their different modules, are probably a pain in the ass to skin due to the variety of layouts you can create, so I might expect them to never get skins.

And then there is the Tech 2 problem.  Among the ships I fly regularly there is the Harpy, the Hawk, the Ishtar, and the Basilisk.  The first two share the same hull as the Merlin, while the latter two share hulls with the Vexor and the Osprey respectively, all three of which have custom skins available.  However, those skins only apply to the specific models rather than generically to the hull, so I have no real options for my daily rides.  I suspect that will change over time, but on day one I will have no real reason to run out and buy a skin, unless I want to drop about $20 to paint my hangar queen Archon blue with the Archon Kador skin.  It looks cool, but maybe not $20 cool.  If I had an Avatar though, I would totally buy the Kador skin. 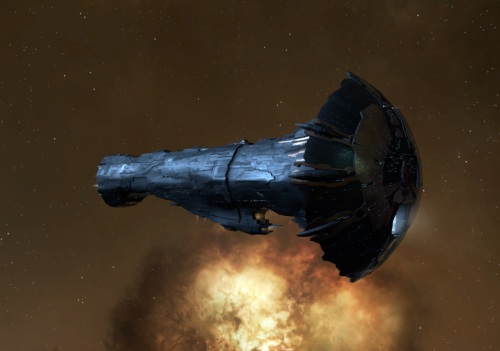 So skins will be great for some and no doubt a disappointment to others.  Some people will want to paint their hulls themselves or have corp or alliance logos present, while others will want different ways to stand out in the crowd.  This month’s Blog Banter was all about such things.  And then there is the question to which I rather vaguely alluded to above, which is who will see these skins in any case?  You’ll see your own and maybe those in your fleet if you look around.

A Quafe skinned Domi in our fleet

But space is big, something modeled well enough in EVE Online, so your foes are often just entries on your overview and maybe some brackets on your main screen.  You have to go out of your way to see their ships and they yours.  Ah well.

Anyway, I’ll probably be in for a couple, once they become available for ships I actually fly.

What do you think of this update to ship customization?  What ships are missing?  What would you buy if it was available?