I nearly did a spit-take when I saw this announcement.

Blizzard has responded… or changed its mind… or caved in to the mob… or stuck to its principles… or screwed over one group for another… or completely failed to understand the issue at hand… pick whichever option fits your personal narrative… and announced that players will be allowed to fly in Draenor after all.

This all started a couple weeks back when Blizzard announced that they were not going to enable flying in Draenor.  The top level reasoning was:

Having looked at how flying has played out in the old world in the last couple of expansions, we realized that while we were doing it out of this ingrained habit after we introduced flying in The Burning Crusade, it actually detracted from gameplay in a whole lot of ways

Basically, flying meant that people ended up not playing the game the way Blizzard wanted. 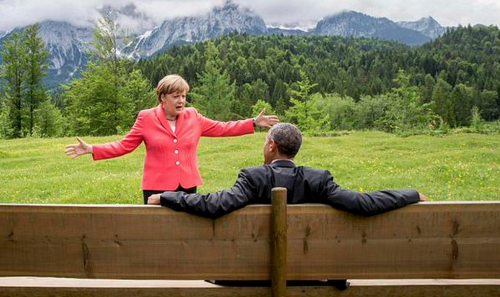 Flying lets you bypass all our hard work! How can you not see that? Look at this terrain!

You can put whatever other spin you want on it, but that really seems to me to be the essential point.  They designed all this content assuming you’d be on the ground, but when you can fly, you can bypass it all. 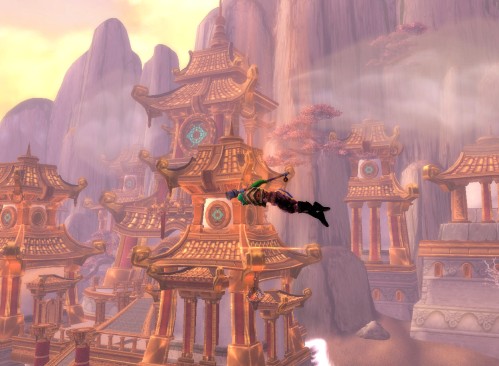 Sometimes I bypass having a flying mount or flight form altogether and just fly!

For me, the great unanswered question in all of this remains how much control over their game should a developer be allowed, whether or not the dev’s view of how their game should be played should trump the player’s view, whether MMO studios be dictating a “right way” to play and should players accept that or not?  Maybe that should be a question for Blaugust, when we’re all struggling to post for 31 days straight.

Anyway, that aside, Blizzard has come up with what feels to me very much like a “have your cake and eat it” solution to the rage about flying.  Or maybe it is a good compromise.  It is hard for me to tell at this point.  However yeah, you’ll be able to fly in Draenor, but first these things you must achieve, ‘ere the freedom of the sky ye see!

When you have achieved…

…and collected 100 treasures in Draenor, AND raised three Tanaan Jungle (a new area coming with the 6.2 update) reputations to Revered (I bet it was exalted in the first pass), then and only then will you be granted the Draenor Pathfinder meta achievement which will reward the Soaring Skyterror mount and unlock flying in Draenor on your account for all your characters at or above level 90… once they patch that in.

The money quote for this:

We believe this strikes the right balance between ensuring ground-based content lives up to its full potential, while providing players who’ve already fully experienced Draenor’s outdoor world extra freedom to “break the rules.” This also provides a general blueprint going forward for content to come. Players will explore new and undiscovered lands from the ground, and then once they’ve fully mastered those environments—a notion that continues to evolve with each new expansion—they can take to the skies and experience the world from a new vantage point.

And I can guess the results of this now.  A large group will be quietly happy and we’ll never hear from them again.  But they were probably quiet this whole time anyway.

Meanwhile, those who very much oppose flying will feel betrayed because content bypassing and dropping in on mobs from above and all the other complaints will be enabled on alts the moment they hit Draenor.  At least back in Pandaria every character had to hit level cap before getting to fly.

And those who have been demanding the ability to fly… well, it would be hard not get the sense that they want to fly so they can do all the things now required to get flying by… well… just flying.  If you’ve already done all that, flying doesn’t help you out as much.  I cannot imagine that unbridled happiness will ensue as this group expected the Pandaria deal, just get to level cap and part with some gold and let me fly dammit!

But somehow the world will keep spinning and the sun will still come up tomorrow.

At least that is how I see it… and I don’t even have any of those achievements.  That would require me to leave my garrison… or log in, which has been getting harder of late.

But others are talking about the great flying compromise of 2015 as well.

23 thoughts on “Fine, You Can Fly in Draenor, But Only AFTER You Hit an Arbitrary Content Threshold!”