At one time in the distant past, the CFC eschewed the idea of renting and those who set themselves up as landlords were derided.

And then, as null sec politics evolved and we ended up with essentially three power blocs, two of which were heavily financed by rental space, the tune of the CFC changed.  The Greater Western Co-Prosperity Sphere was born about two years ago.  The CFC became landlords, pragmatism winning out over exclusion and any spurious  feelings of ideological purity.

That this venture remained a distant third behind the other two main rental empires was no surprise.  The surprise, to my mind, was that it got any renters all.  After years of rental and recruitment scams, who would actually rent from Goons?

As it turned out, quite a few people would, and that rental ISK helped filled the coalition coffers.

And then came the looming threat of what became known as Fozzie Sov.  With the Phoebe expansion, the ability to range across New Eden was throttled and the CFC let go of some of its southern holdings.  As the details of the Summer of Sovereignty changes came out, plans for further consolidation were drawn up.  Fountain and most of Cloud Ring would have to go as well and the coalition, now renamed The Imperium, who fortify itself in the north. (SMA holds that bit in Cloud Ring, J4LP having been reset some time back.) 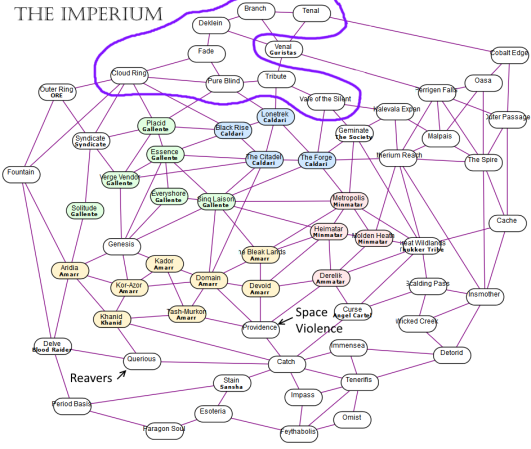 Now the changes has hit.  Null Sec is choatic as various factions explore the dynamics of the Entosis Link module.  The Timer Board site shows a lot of systems in play.

Up in the north though, things have been relatively quiet for The Imperium.  We have lived there for so long because the systems are decent for ratting and mining.  There are a few lemon systems, but the active defense multiplier… the measure of how much a system gets used, which influences how hard it will be to take… for a lot of the north was pretty high straight out of the gate on the 14th.  Where we live is defended.  However, some places where we have not traditionally lived are pretty weak, with low ADM numbers.  This is particularly true in Pure Blind where, in the past, many of the systems haven’t been worth ratting or mining.

However, with the PvE upgrades that were announced just before the sovereignty changes hit, the systems in Pure Blind are suddenly viable.  The Imperium just needs somebody to live there.  We have been encouraged to rat there and strategic mining fleets have been running out that way.  I think I have personally raised the ADM of one system in the region.

But all of that is a temporary measure.  Not many people live in the vicinity.

So a new plan has been announced.  GSF is going to allow corps to join if they want to live in, rat, and mine, in Pure Blind.  There will be a fee to sign up and a tax on ratting and a charge for system upgrades, but otherwise corporations will be able to carebear to their heart’s content as there will be no fleet participation requirements.

In addition there will be a corp in GSF for individuals who want to sign up for that plan.  Ratting will have a 25% tax, but mining will be free.

GSF already has a way for anybody is keen to join to get on board through Karmafleet, which has greater access, so is the more likely conduit for spies and awoxers.

So we’ll see if there are any takers who want to live and rat and mine in Pure Blind.  It is close to Lonetrek, so getting things back to high sec in general, and Jita specifically will be easier than most places.  Is greater population density the answer to Fozzie Sov?

8 thoughts on “A Call for Space Carebears”