I’ve mocked Lord of the Rings Online on occasion for taking so long to get to Mordor.  We’re past the eight year mark and we’re just getting a hint Minis Tirith might come to the game in some form. 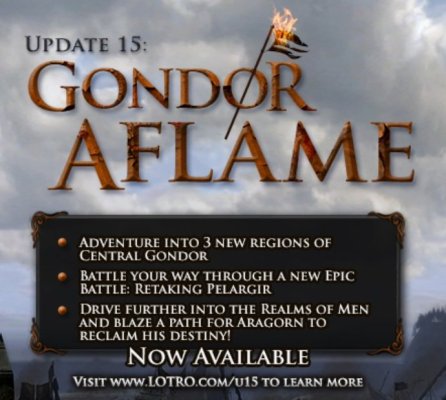 The events of the books on which the game is based were wrapped up in three and a half years, and that time line generously includes a couple years or post-war activity.

But my own progress in the war of the ring has been desultory even in comparison with Turbine’s progress.  I made it to the far side of Moria back in August 2013, and so completed the game’s first expansion, which went live in November of 2008.

Which isn’t to say I haven’t played a lot of LOTRO over the last eight years.  I have characters on five servers… soon to be consolidated down to two… or maybe three… and I have had good times playing LOTRO.  I have most certainly gotten my lifetime subscription investment out of the game.  I just tend to run out of steam with my characters somewhere around level 40.  After the Lone Lands and Evendim the experience becomes a bit uneven in my opinion and I tend to stop and make an alt of something before I get to Moria.

So the fact that I have a character on the far side of Moria says something.  Moria was actually very good.  It started slow, but built up to be quite a bit of fun after I got past the opening area.

And then ended up on the other side in Lothlorien and things sort of fell flat. 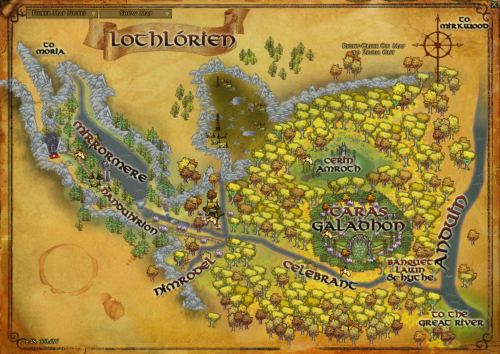 Moria had a story and different quests and kept me engaged.  Lothlorien seemed to fall back into the defacto kill/collect ten things… generally killing orc or collecting things from orcs… in a land that, while pretty enough, had no real unique feel to me.  So my progress dropped off.

And then, of course, came the Helm’s Deep expansion and the great skill revamp that brought us what looked like WoW talent trees, circa 2005.  That both changed the quirky but unique feel of LOTRO classes and made it feel like I was going to have to re-learn how to play my captain from scratch after having made it to level 61. 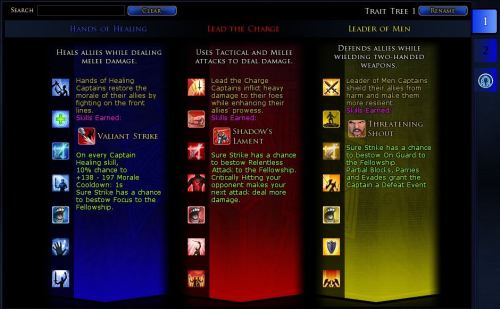 The zone and the class changes conspired to keep me from playing the game much over the last two years.  My main character, my captain on the Brandywine server, basically hung out in the Twenty-First Hall of Moria that whole time, it being the closest place with a bank.

I logged in at least once a month to keep my account active and collect my 500 Turbine points… points which I then used to buy what appears to be the last two full-on expansions for the game, Riders of Rohan and Helm’s Deep.  So I could move forward with the game, owning all the content at this point, I just needed to find the motivation.

Then Gaff appeared to be getting the LOTRO bug.  He decided to re-subscribe and started on with his highest level character, pushing on to Mirkwood.

So I shook off some of the cobwebs, cleared some of the fluff out of my Captain’s bags, and rode back out to Lothlorien to see if I could get invested.  I also had to pick a spec and figure out some new skills.  I need to find a decent guide to playing the captain, but I muddled through, picking the DPS spec and trying to pick things that improve damage.  I also think my legendary weapon, a halberd for my captain, needs to be replaced.  Even with its DPS fully upgraded, it is barely better than a couple of one hand swords I have gotten as drops.

I killed some orcs.  And some more orcs.  And collected more stuff from them, occasionally burning some things they built, because screw orcs.  And eventually I managed to get into some of the story again, catching up with the as-yet-unbroken fellowship… I even spoke to Boromir… and was actually introduced to Celeborn and Galadriel. 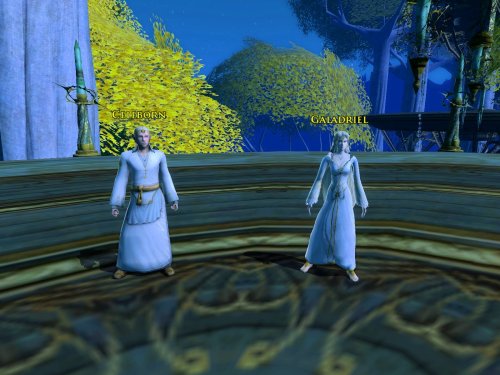 We live in the woods, so our natural stance is wooden…

This gave me hope that maybe, just maybe, I might be nearing the end of the bland sameness of Lothlorien and could be inching my was slowly towards Mirkwood.  I would dearly like to get there, if only to get into the second game expansion.

We will have to see if I can stay invested.

And then there are the server issues.  Gaff is playing and it sounds like he might have made it to Mirkwood already.  However he is on the Silverlode server with the Nazgun.  I only have a level 35 Rune Keeper on that server, so to play there I would have a long way to catch up.

Of course, the Silverlode server is going away.  However, while there are free transfers to other servers, Brandywine, where my captain resides, is not on the list.  The Nazgun is headed to Landroval at some point, and I can actually get a free transfer OFF of Brandywine (it is apparently the highest population US server) to Landroval, but I am not sure if I should… or if I could.  I already moved a bunch of characters there from Firefoot, so I might not have enough slots left to bring more than one or two characters.  And the Nazgun is holding out on moving for some reason, so actually playing with Gaff is problematic at the moment.  Then there is WoW, where I have 21 days left on my token.  No easy decisions.

Life in the MMORPG lane I suppose.

7 thoughts on “Down and Out in the Twenty-First Hall”