Leaving my existential angst where it belongs… something for the middle of the night, quiet moments in the car, or where I need a blog post on a Friday… it was back to the only war The Imperium has at the moment… in space, at least.

Operations in Cloud Ring seem to have been left to SMA, and our light blue ally Fweddit, who together hold most of the sov in the region now, with 33 of 40 systems in their control.  I’m not sure why SMA want its, but they have their share. 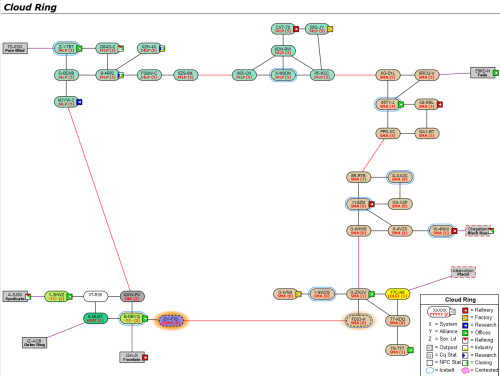 However, that is null sec.  The other part of the war, so called, is our assault on moon mining operations and such in low security space, a destination where The Imperium has fared poorly in the past.  Asakai is often listed as an example, or the trap at Daras.

But I am not sure The Imperium has ever really settled in and tried to attack targets in low sec as part of a sustained campaign against residents there of.   So a new adventure.

The low sec meta… and I know some cringe when that word gets used, but it is the term of art… differs from null sec.  You cannot use warp disruption bubbles.  There are guns at gates and stations that will shoot you if you aggress.  Security status has some relevance, and people will often avoid things, like shooting pods, that will cause a big hit to their sec status.  And, of course, it is empire space.  There is no CONCORD, but there are NPC stations and infrastructure about. (And the lighting is better for screen shots.)

This leads to different behavior.  The locals form up against us in expensive faction battleships… nearly two billion ISK Machariels being the hull of choice… with pods full of high grade implants, in order to achieve a qualitative advantage over The Imperium.  A blobbing via stats versus blobbing by number match up.  How do you balance that out?  People whine because we bring two times the ships, but we’re fighting faction fit faction battleships that run 3-4x the cost of our ships.  I mean, here is a fight where we lost six times as many ships, yet won the ISK by almost two times.  How do we figure the qualitative advantage into those numbers?  Is ISK alone a good enough measure? (serious questions, not just rhetoric)

Not that we fly threadbare doctrines.  We’re transitioning from a Tengu to a Proteus focus for our main fleet, neither of which are cheap.  But we also fly lesser doctrines, like artillery Hurricanes and the much loved Harpy fleet, where losses are allowed and expected because the fits just don’t cost that much.  And every one of our doctrines has come cheap, low skill ships so that new members can join in operations right away.  But nothing we fly comes close, in a ship to ship comparison with bling fit Machariel.

And so The Imperium have been wiped out a couple of times now, something loudly proclaimed on Reddit.

I had not been on any of these low sec ops until this weekend.  It has been a busy week and the ops and timers seem to favor either our Euro or Australio-Korean contingents.  My first run was with a Hurricane fleet that went out to bust a small tower that was coming out of its reinforced state. 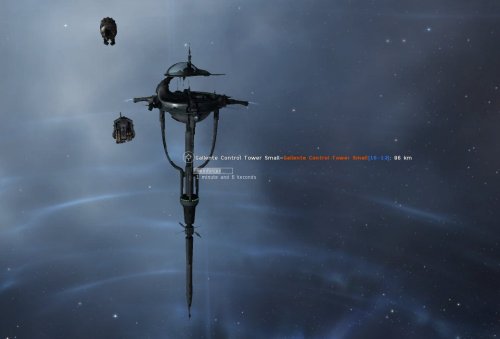 For this we headed out of D2-HOS and straight into low sec via Manternault in Placid, through Black Rise, ending up in Saranen in the Lonetrek region, where the tower lay.  We were paranoid about lurking Machariels.  We arrived at the system and setup for the shoot, opening fire as soon as the timer ran down.  Some SMA ewar support showed up to cover us as we started. 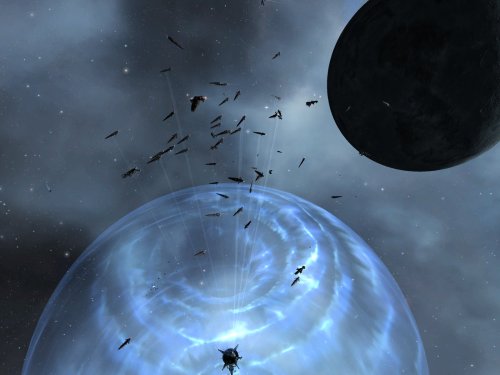 As it so happened, nobody came out to contest the tower.  We blew it up and headed back home.  Home, as it turned out, was only one gate and one jump bridge away.  We ran through low sec for no real reason that could be explained, other than a vague mention of “op sec.”

I think somebody just didn’t notice until we were already on our way, but what do I know?

Saturday night, another opportunity to join in came up.  There was a late-ish USTZ op against a Snuff Box tower.  Snuff Box is one of the groups that had a hand in our big welps so far.

This was going to be a big op, the foes were expected to show up in force, with their Machariels forming the backbone of the defense.  Pings went out early.  As it so happened, I missed all the early pings, having spent the afternoon first at my daughter’s play, then as part of the group of parents to had to tear down the set after that final performance.  But I saw the one from Asher at just after 9pm Pacific time calling for everybody to get into the fleet.

My wife was out with a friend, my daughter and I had just finished watching a movie (Nightcrawlers, which was pretty good, but felt like it needed Matthew McConaughey as the lead. That would have taken it to a new level.), and I had some free time, so I launched EVE, got on coms, and settled in to see what was going on.

It was going to be a Tengu fleet.  I was reluctant to buy a new Tengu, or a Basilisk, off contract as I already have enough of each ship hanging around in other stations. (Known problem)  However, there was also a call to get a lot of electronic warfare ships into the fleet as well, and they were handing out Crucifiers for free, so I took one of those to play the ewar role. 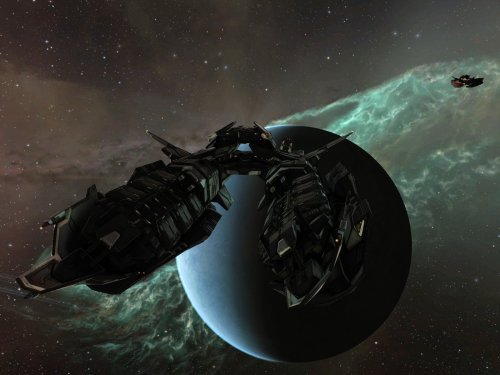 As it turned out, I wasn’t the only one with some free time on Saturday night.  The fleet filled up by the second ping and the ewar contingent got moved to their own fleet under Malkuth Tre.  There was the usual mucking about, finding boosts, getting everybody settled on what the plan was, then repeating that plan a few times for those who joined late, were AFK, or who just have short attention spans.  For my part, those in Crucifiers were to apply range dampeners to Machariels in order to reduce their effectiveness.

Eventually the order came to undock, and our wee frigates slipped out of the station. 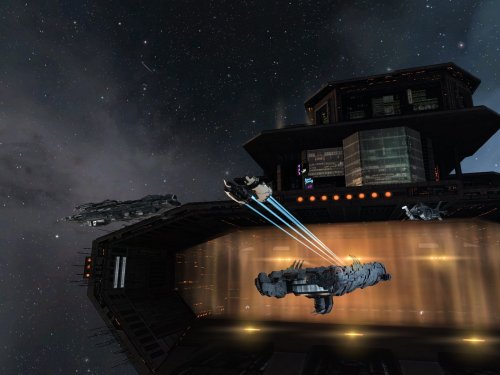 From there we went to the jump bridge, bridged out, and then flew through 15 gates to arrive in the target system, Anchauttes… which was literally five gates from where we started, so I just give up.  I go where the FC tells me.

We started setting up around the tower, staying at range as the Tengu fleet landed.  Our job was fairly straight forward.  We warped out an back a couple of times to get ourselves setup, but things mostly went well for us.  We had a couple of interceptors try to harry us and set our drones on them.  There was a small group of Griffins, the Caldari ewar frigate, that showed up to try and jam us in return.  When they got too close our drones chewed them up some.  And a few ANIs and Cerberuses  tried dropped on us a for a bit, managing to pop some of us over time, including our FC, at which point Cartras Vokan took over.

It was hard to tell how the main battle for the tower was going.  It came out of its reinforced state and SnuffBox and its allies stuck close to it, their faction battleships and logi on the edge of the bubble, wandering inside when they needed to break locks on their attackers. 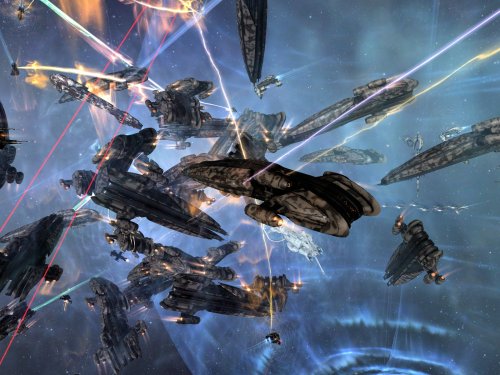 Machs at the POS shield

We damped the faction battleships and their logi when we could, threw drones at people who wandered too close, warped off when we had to, and otherwise kept dancing about the field.  We were on our own voice coms, so the status of the battle wasn’t clear to us.  We had our own things going on.

However, once a combined fleet of Imperium carriers and super carriers dropped onto the battle, I figured this were going our way. 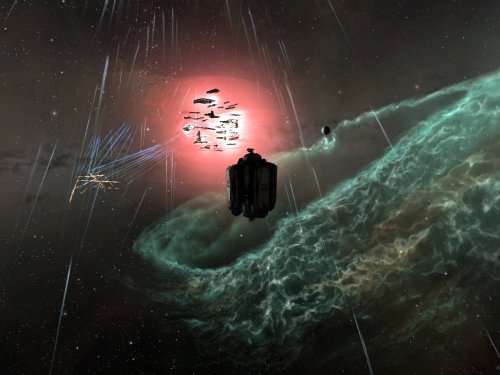 All of that on grid made the defenders look for an exit, eventually leaving the grid for the local station, allowing us to concentrate on the still vulnerable station tower, which went down.  Oddly, we were out of system by the time it popped, so I did not get on the actual tower kill mail, despite having plinked it a few times.  However, I ended up on the kill mail for a pile of the modules.  Not sure how that worked out.

We were not there because, after picking up some loot from the field (I harvested some Bouncer II sentry drones) we were sent off to escort another capital ship fleet, including dreadnoughts, to hit another tower.

That was an uneventful operation, as no resistance formed to oppose it.  That gave us time to look at other things, at which point somebody noticed that we had a couple of Red Alliance pilots in our fleet.  Red Alliance, which was losing a war the last I checked, to the point of folding up shop and joining SU, is not an Imperium ally, they have no official standings with us, and are not anywhere close to us in null sec space.  Yet we had a couple of their pilots in fleet.

So we kicked them, only to have them rejoin.  We kicked them again, they rejoined.  They also brought a few friends back with them.  We started looking for who might having personal standings with them, but nobody would confess. 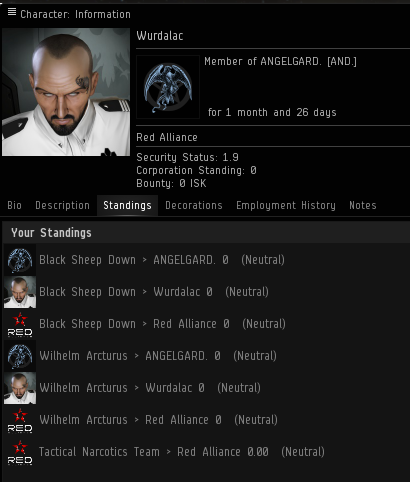 I was the wing 2 commander, but it wasn’t me!

We took away the fleet advert.  We changed the standings needed to join to +10.  We changed the fleet so that the fleet boss had to approve anybody joining the fleet.  But no matter what we did, the Russians would just appear back in fleet and troll us with “your mom” jokes in bad English, which actually made them all the more choice.  They also clicked on our participation link, so their efforts were officially recorded.

The fear is that we have a Russian infestation and that we might have to burn down the whole alliance to get rid of them.  They certainly seemed persistent.

That gave us something to focus on as we shepherded our capital charges to their target and then back home again.  At one point a Sabre landed on a gate with us and some caps and my first thought was, “Oh crap, capitals tackled!”  But then I realized we were still in low sec, so no bubble was coming.  We just popped him and that was that.

The battle report from Anchauttes looks like the ISK war was pretty evenly split, while the tower we were after went down, so op success I suppose.  The war will continue as we learn and adapt to the methods of our foes… and dropping supers on them when we have to.

Addendum: Snuff Box has a video from their side of the battle.

A few more screen shots from the events above. 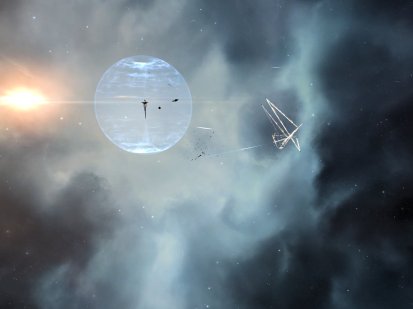 Hurricanes and their logi at a tower 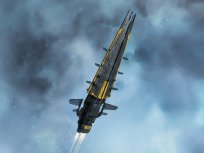 I got to show off my Valklear Glory Hurricane SKIN 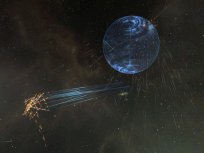 Firing trails at the POS fight 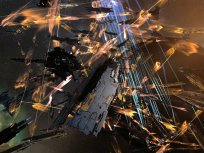 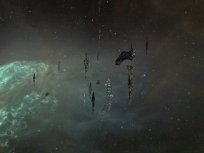 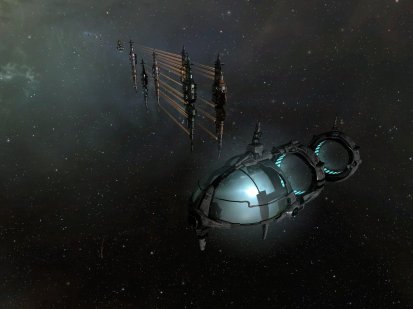 Nags landing on a gate 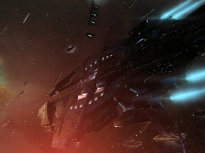 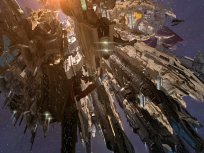 A mass of caps landing on a gate 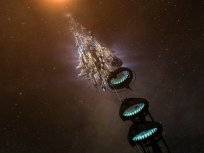 That blob, zoomed out some