Well, maybe not the world, but there is no question that ships make New Eden go ’round.  And few things get EVE Online players in general, and me specifically, is new ships being introduced to the game.

Think of how many expansions where the hallmark feature was a new class of ship.

What did we get in the last couple months?  New faction electronic warfare frigates, new tier 2 faction logistics frigates, an ice mining frigate, and that brand new class of command destroyers.  That is a lot of new toys to play with. 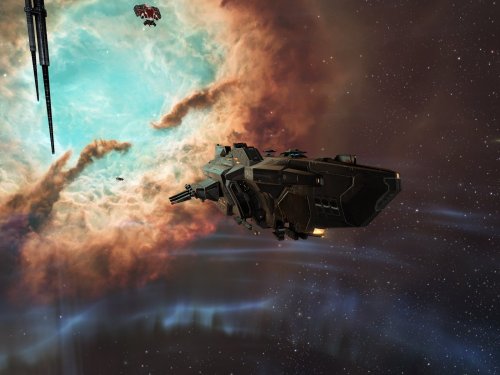 And these new ships have a great effect on the game, shaking up play styles and fleet tactics and giving people new ways to play the game.  The command destroyers especially have changed things up and, with their AOE MJD, have become a staple of operations already.

But when is it too much?

The question for this month’s EVE Online Blog Banter asks:

We all like important internet spaceships right? The more spaceships the better right? Or are we getting too many to be easily to remember them all. A Mastodon on scan? That the hell is that and what does it do? Oh! Never mind!

Are we getting too many ships. Is it too complicated to remember them all and what their traits are? Do FC’s these days need an encyclopedic knowledge of ship types unless they want their fleet to DIAF. With more and more ships being released each year will we ever reach “too many” or do you think there can never be too many important internet spaceship types?

Are there too many ships in EVE Online?

There are enough to devote a whole blog to pictures of them I suppose.

Back before the Odyssey expansion, which went live more than two and a half years ago, CCP was talking about reworking and detangling the mess of subcaps they already had on the field because the balance was such that there were a few good choices and a lot of bad ones. 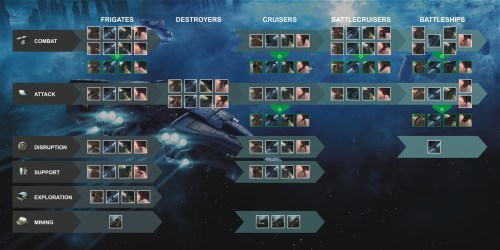 CCP’s Tech I and faction subcap chart before Odyssey

That chart doesn’t have the tech II or the pirate faction variations of those hulls, nor the ships exclusive to some non-empire factions.  And then there are capital ships.

A since then, even more ships have been added to the game, including new skills required to fly some of those ships, while other ships have been revamped and tinkered with.

The ongoing result is, for me at least, confusion and neglect.  I am confused while many a hull suffers from neglect because some newly released ship or re-balance pass makes one ship shine while another seems sub-par.

So if you want to camp gates today, you likely have a Svipul along as your old insta-cane isn’t what it once was.  In The Imperium two doctrines got the axe, one based around the Hawk and the other based around the Harpy because the Jackdaw simply does everything either of them can do better.  I think Clay Hakkari is still weepy about the Harpy doctrine.

And then there are the quirks, like the fact that sometimes the navy faction version of a ship is better at the same role as the regular one and sometimes that are fit only for totally different roles.

I know there are some New Eden grognards out there that live in EFT and Pyfa for whom the fitting game is satisfaction in and of itself.  But for people like me I just want to know what to fly.  Fleet doctrines at least simplify that aspect for me, but that still doesn’t solve every problem.

The skill training aspect still holds sway when a balance pass from CCP hits and you find that those skills you had been focusing on are suddenly no longer needed because there is a new “best” solution.  I am past 150 million skill points and I still run into that problem now and again, finding some skill I never noticed is suddenly required.  For people with less SP breadth than me, and new players especially, this is no doubt frustrating.

For example, with our deployment down south, we have picked up a stealth bomber doctrine.  Two, actually, but don’t get me started on that.  For that doctrine the ideal stealth bomber is the Purifier.  I can fly that.  It is a pretty little ship, and the only one of the lot that looks good with a SKIN. This is it with the Raata sunset SKIN. 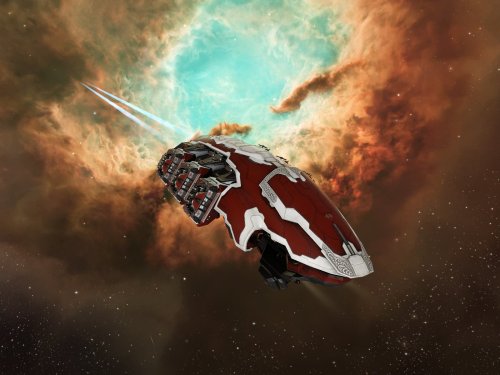 That nebula in Khanid is so distinctive

However, I can fly it because I happen to have all of the racial frigate skills trained up to 5, plus the stealth bomber skill.  I can fly any of the stealth bombers at this point.  But for newer players on our deployment, and we are deploying with KarmaFleet so there are a lot of those, the choice of what to fly is much more limited.  Due to other coalition doctrines, they were encouraged to train up the Caldari skill path, so they likely have Caldari Frigate V as their only gateway into stealth bombers.  And, of course, for our needs the Caldari stealth bomber, the Manticore, is at the bottom of the stack rank of desirability.  The hulls were ranked: 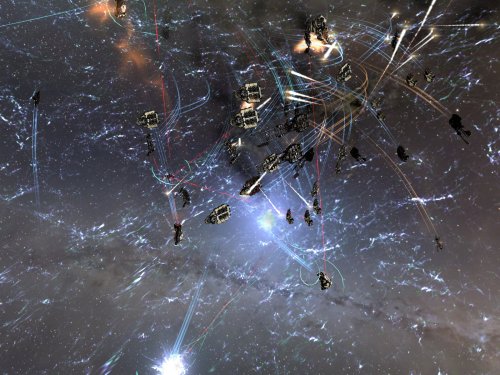 Now, it worked out for us.  We melted ten Augoror Navy Issues and their support, including two Guardians, while only losing one bomber.  Yes, we had overwhelming numbers, but stealth bombers are soap bubbles when hit, so they should have taken a lot more of us with them.

That aside, it wasn’t really a unified doctrine.  And, of course, the supply chain for replacements is complicated by the fact that we have to support four different hulls, each with a different fit, while deployed far from home.

(Business tip: Now would be the time to ship Purifiers from Jita to Amarr. There was only one on the market there the other night.)

Now, there is some slop allowed in a doctrine like that.  But if you want to run a more unified fleet where you want a single, mainline DPS ship, as with our Rattlesnake doctrine, you have to provide lower skill  support roles or leave people out.  And if you want to fly the big ship, you may have a lot of training to do.

All of which means what?  That EVE Online is a complicated game?  That ship balancing is hard?  That when CCP introducing a new ship it is often over powered?  That over powered ships are eventually nerfed?

All of that and more I suppose.  This is why a lot of people don’t like the game, and while other people love it.  And I suppose it is a bit of an achievement that some of the oldest hulls in the game can still be viable.  What other MMO has in-game gear more than a decade old that is still viable.  I know somebody will have an answer for that, but it is still a pretty big deal.

I just count myself lucky to be in Reavers, because Asher is one of those savants that likes to play with fittings, so we get to go fly some experimental doctrines built around Typhoons or Claws or Ravens or Caracals or Rokhs now and again.  I’ll throw my ISK at those ventures just to die in a blaze of glory every time.

Anyway, this is a post for Blog Banter #71.  Fortunately, some wiser people than me are writing on the topic, so maybe you’ll find something more on point and less just venting and fist shaking from the list below:

I will add additional posts as they appear.