It was fast times in Jita last night as a mass of traders, speculators, scammers, and other interested parties descended on what one might call the Commonland’s Tunnel of New Eden, the economic capital of the game.  A record number of players were in the system, thanks in large part to the fact that the Brain in a Box feature, which came in back with the Parallax update last November (which was also the last named update in Syndicate), let CCP increase the hard cap they  have on the system to 5,000 players.

So there was room for more.

Still, ~3,600 pilots in the system is a lot of people.  At 6VDT-H, still the biggest battle in EVE history, we topped 4,000, but that was a special occasion and the system was heavily reinforced by CCP and we still ended up with time dilation so bad that the UI simply wouldn’t respond for extended periods of time.  But then, we were also shooting at each other too.

Anyway, lots of people were in the system, and they were there for skill trading, which went live with yesterday’s update.

Of course, that was 60,000 skill extractors obtained through various means yesterday as well.  Since you have to buy them via Aurum, which somebody has to purchase through a straight up cash transaction at some point, it looks like something of an immediate, if minor, economic victory for CCP.

You can even buy they for cash directly…

Of course, I had to log in and take a peek.  I had my alt sitting in Jita and when I logged in CCP was night enough to let me know right away that skill point injectors were available and how many skill points I could add to my character with each one.  However, since he is past the 110 million SP mark, that wasn’t very much per injector.

I also saw the scam du jour in Jita local, which was to offer a contract allegedly for a skill injector at 50 million under the current market price when, in fact, the contract was for a a skill extractor, hoping some anxious buyer looking for a bargain wouldn’t notice the difference until it was too late.  One can learn many lessons about unscrupulous behavior in Jita local.

The market price for skill injectors in Jita last night was up above 650 million ISK per, with plenty listed on the market. 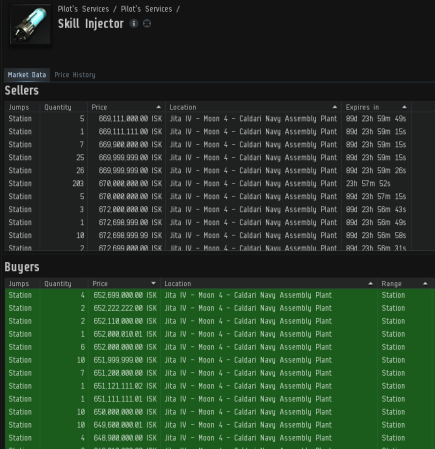 Skill extractors were running at about 300 million ISK per unit at the same time.

Of course, this was the first night and the market was flooded with excess inventory, fresh demand, and a full of people trying to figure out how to make some ISK out of the whole deal.  Gevlon reported making 350 billion ISK yesterday on skill sales and extractor arbitrage  How the market will look in a week, a month, or a year may change, but last night was the crazy time.

JonnyPew emptied out a 121 million SP character to boost his main from 7 million to 80 million SP, letting 41 million SP disappear forever.  Some people do things just to say they have done them.

Noizy reported that PLEX sales in the first six hours of the day were way up and suspects that yesterday might have been a record day for sales overall.  The price of PLEX itself was up to the 1.3 billion ISK mark, making my six year old stock screen shot of PLEX on the market even more comically out of date.

As for me, I neither extracted nor injected, I just watched the whole thing for a bit before going off to read a book.

Some day, if I need to boost up a cyno alt quickly or some such, I might buy an injector.  But for the moment I have no skill points I consider excess on either alt or main and both have so many skill points already that they are far end of the diminishing returns.  They can train an injector’s worth of skill points… 150K for either of them… in a little over three days, so I’ll just do it the old fashioned way.