As noted in the last post, we were having a fun op then because we were preparing to go all out for a station defense op the next evening.  One of the quirks of Fozzie Sov is that stations are not linked directly to the sovereignty of a system in null sec any more.

Back during the Dominion sov era, a station was linked directly into the sovereignty, so to get a station, or to take a system, the station was part of the fight, as happened during the epic struggle last summer at ED-L9T.

Now we’re in Fozzie Sov though, so while Northern Army owned the system 60M-TG… 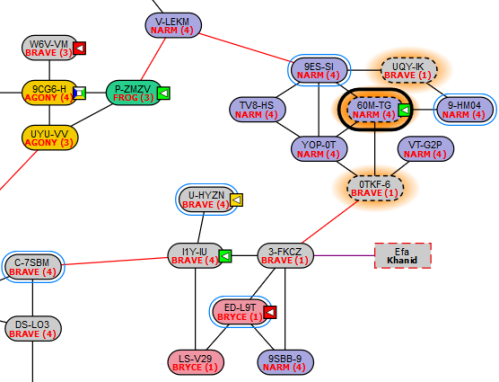 Our favorite corner of Querious

We owned the station in the system… or KarmaFleet did, in any case.

This was taken as part of the six hour Fozzie Sov entosis tug-of-war with Northern Army while I was away.  Then they managed to reinforce the station when we didn’t put up much of a fight during a vulnerability window… you don’t have to own the sovereignty, but if you don’t the entosis time is pretty short.  So there was a question as to whether this would turn into another long struggle.  Asher was pinging for numbers early so that we could at least contest the station.  The status of our second home in Querious lay in the balance.

As the entosis window approached, the ping went out to form up for this.  We would be taking out a main fleet of Ishtars, beloved of our leader Asher Elias as they lend themselves well to his favored tactics, along with a second fleet of Cormorants to scour nodes of any hostile entosis operations.  However, Asher opted not to lead us, and Thomas Lear was the FC of the Ishtar fleet.  Asher was along for the ride in an Onyx.

Once we had number, we undocked and headed towards the constellation YB7B-8 where entosis command nodes for the action would spawn and where any fight would likely take place.

Piling out of the station…

I joined up with the logi team in a Basilisk.  Asher had been calling for people to use SKINs for their Basilisks if they could afford them.  We ended up with a nice turnout, with half the Basis wearing the Raata Sunset or Blue Tiger SKIN.  You can see the red ships in the screen shot above.

We headed to 60M-TG and then ended up moving around the constellation as reports of a hostile fleet filtered in.  There was some running about and we eventually ended up pinning down a combined Brave/Northern Army fleet in 3-FKCZ.  They were outnumbered, so we picked them apart with relative ease, losing only two Sabres, which you expect to lose in such a fight, and one Ishtar that failed to broadcast for reps when it was made the primary.  Everybody else lived, even an Ishtar that broadcasted late and which only got reps just as damage was entering structure.  Battle report here.

Then it was back to entosis modules and command nodes.

This is the big deal in Fozzie Sov, the target for your entosis link module

We watched as the counter tipped towards our side.

That ran down without much further interference.  There were a couple of attempts to counter entosis individual nodes (I sacrificed my alt in a bomber to interrupt one) but otherwise it pretty much ran our way.  The station was saved.  We then took the time to then reinforce the TCU and the ihub while we were there.

With the evening still young-ish, we then headed over to a Northern Army R64 tower and set about reinforcing that as well.  This is what Asher calls putting something in the bank now that will yield a fight later.  Reinforcing is somewhat dull… and the tower had a lot of resist modules on it, so the shoot went slowly with just a small pile of Ishtars using sentry drones to hit it.

And the slow shoot was further delayed by word of another small fleet sitting astride our path home, which we ran over to kill.  I managed to launch a combat drone and get on a 1.2 billion ISK Vindicator kill mail.  I like to get on kill mails as logi.  Then it was back to the tower to finish putting it into its reinforcement state.  As its shields slowly ticked down there was a mix of anxiety as to whether the tower might be stront’d or not.  If not, we would get a kill, but the shoot would go on for quite a while longer.  If it was stront’d there would be no kill, but we could head home. 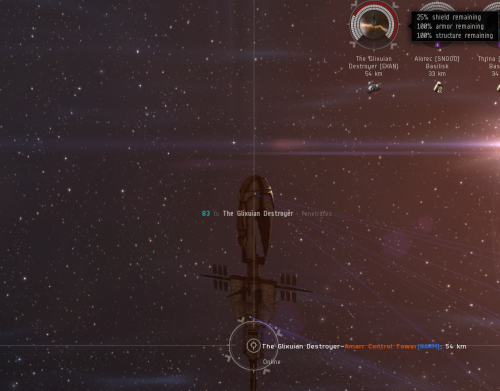 Down to 25% shields, the moment of truth at hand…

It was stront’d, which was a bit of a relief to some.  By this point the fleet had been formed up for over three hours, which entitled us to a second participation link, but which is also about the point when people start to tire of this sort of thing.  With the tower’s timer set, we returned to our staging system having completed all our objectives for the night.

Basilisk warping for our home station

The word came down the next day that we would be returning to the north.  While we had been having a good time down in Querious, things had been continuing to boil up in our homeland.  Draining off a group of active pilots when there seemed to be plenty of content at home struck somebody as a dissolution of resources, so convoys began heading back later in the day.

And so we bid farewell to Querious.  Northern Army has already reinforced the station at 60M-TG and will no doubt recover it before today ends.  I am leaving my stuff in our staging system.  I suspect that we will be back again.  It is too easy a place to which to deploy not to come back.