The other bit of news from Daybreak last week, largely overshadowed by the EverQuest Next cancellation, was that EverQuest Next: Landmark… erm, Landmark… was going to launch soon.

Landmark was, of course, the tool set that was going to be used to help create the world of EverQuest Next which grew into a product in and of itself.  It was a bit of a line item for me in the original announcement, an adjunct to the main focus, which was EverQuest Next.

Then Landmark sort of grew and morphed and became a product on its own, shedding the EverQuest Next prefix after a bit. 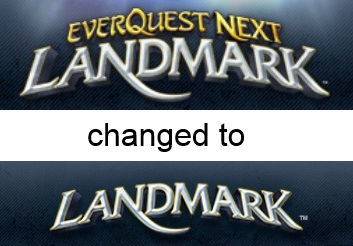 Now though, there is no EverQuest Next, only Landmark.  And Landmark is coming this spring… spring being defined as March 20th through June 19th on calendars in San Diego:

To Our Loyal Landmark Community,

You read the title right: Landmark is LAUNCHING this spring and I’m thrilled to be on this adventure with you!

As the community has grown and designs have flourished, we no longer view Landmark as just a building tool. We’ve been toiling away making Landmark into a wonder unto itself. While the look of our world was inspired by what was intended to be the voxel world of EverQuest Next, Landmark has evolved into its own game with its own unique identity and purpose. If you missed the news on EverQuest Next there’s a letter from Russell Shanks, Daybreak Games president, here.

The creativity of the Landmark community and the potential for telling stories in this digital world is beyond what we imagined. Our vision for Landmark is to provide a place where you can create ANYTHING, tell your own stories, and share your creativity with other players. We are wrapping up a HUGE game update for Landmark with LOTS of new additions and improvements, some of which you’ve already seen in sneak preview posts from Emily “Domino” Taylor on the forums. We are excited about what’s to come for Landmark and we can’t wait to see what you think.

The Landmark team has a lot to do before launch this spring and we’ll continue to keep you informed! For starters, here’s an FAQ if you have any questions after reading this letter.

We’re grateful for your continued support and are looking forward to the coming weeks as we prepare to launch Landmark!

So there is that.

As a personal opener, I am a little bit miffed that Holly Longdale is now the executive producer of Landmark.  It isn’t that I want to deny her any career growth she might desire, but she has been the executive producer of the legacy Norrath group over the last year at Daybreak and I hate to see her attention split away from EverQuest and EverQuest II.  Those two titles had a good year and, while I know Holly isn’t literally responsible for everything, she has been the public face of that team since the Daybreak acquisition.  During that time she has done a lot more to promote those games than the community team ever did.  Half the time it seems that the official accounts are just retweeting Holly.

So while it is Landmark’s gain to get her on the team, I do hope it isn’t Norrath’s loss.

Then there is the FAQ mentioned in that update.  I think we can declare “Free to Play, Your Way” dead at this point.  As was announced with the H1Z1 split, nobody is getting anything for free these days.

If you bought a Founders Pack, then you are set. 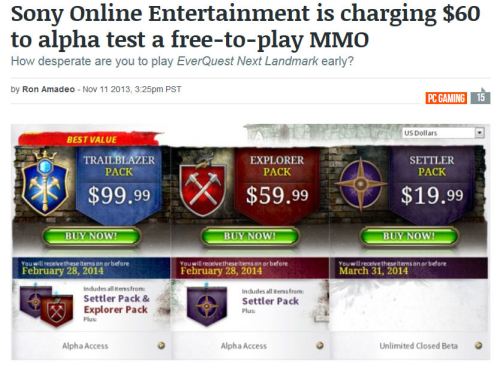 For specific definitions of “best value”

However, if you were in Landmark on a Founder’s buddy key or some other free intro, it is going to cost you $10 to get back in the game once it goes live.  That isn’t a huge toll… it is half the price of getting in early… but it is a bit of a change-o-rama from past tales when “free” was still a thing.  You might imagine that if you gave SOE a hundred bucks for the game back in 2014 that your buddy keys would be covered.  The forum thread is full of people irked about that.

Also noted is that being a Station Access… erm… Daybreak All Access member gets you nothing as far as Landmark goes.  You have to pay the $10 toll as well.

And then there was a bit about wipes.  The worlds will be wiped at least two more times between now and launch.  There are new features to be put in, including that pioneer landscapes plan to make flat claims available.

Finally, there is the appeal of the game itself.

I am not sure what to think of the pitch about Landmark giving you a way to “tell your own stories,” aside from meaning that you had best not expect Daybreak to be providing any in game narrative.

But as a “better” Minecraft, the game has potential.  Being able to build in a better drawn world where everything isn’t scaled off cube shaped blocks that are one meter on a side is a pretty big deal.  People have made some incredible things in Landmark.

However, I am still a bit dubious about the whole “social MMO” aspect they are pushing when it comes to Landmark.

One of the charms of Minecraft is that you can have a world of your own, or you can run your own server and keep the population down to just friends.  And, of course, you can build anywhere in Minecraft.

When it comes to Landmark though, you are not necessarily going to be able to pick your neighbors.  While I am sure that Daybreak will have some guidelines they will enforce, you may find your exquisitely fashioned crusader castle sharing a valley with a McDonald’s or other such things. 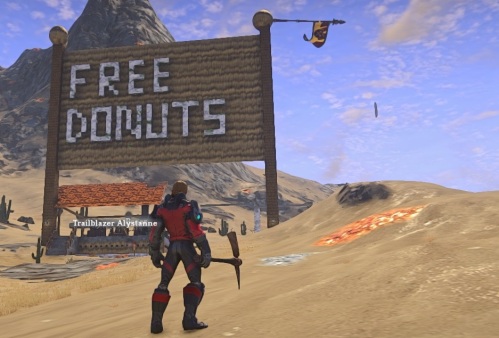 Freedom’s just another name for…

As I pointed out in a past post, freedom to make what you want in a shared world means having to put up with what other people want as well.  And making a fuss about what your neighbors are up to can often end up making things worse, something I’ve heard happened more than once in the primordial sandbox world of Second Life.

So while I am interested in what I guess one could call the “Hi Def Minecraft” aspect of Landmark, the shared world, the claim limitations, and the idea of neighbors close at hand isn’t thrilling me.  Then again, it is only $10, and I’ll bet it will be $7.50 or $5.00 when the Steam Summer sale hits… should Daybreak be able to keep to their Spring launch plans.

I will also be interested to see how much buzz the game gets at launch.  One of the possible problems I see with early access… and Landmark will be well past the two year mark in that state when it goes live… is the potential story for the core audience before the game ships.

Addendum: Daybreak announced that they are adding what sounds like the dungeon creation system from EverQuest II into Landmark as part of the pre-launch updates.  That gives the title something else, but I am still not sure how that will fit in with the limited claim size aspect of the game.