In a turn of events which should surprise nobody who reads this blog regularly, having spent a chunk of the past week or so writing posts about the demise of EverQuest Next, the seventeenth anniversary of EverQuest, a new feature in EverQuest II, and related… or somewhat related… Daybreak topics, I had the urge to spend some time in Norrath over the weekend.

I am, if nothing else, predictable.  Even I could see this coming part way into those posts. 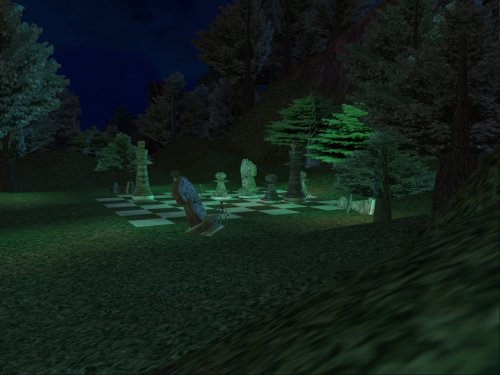 The question was where to go.

I am setup with Daybreak Access at the moment, so all servers are available to me.

EverQuest, the ancestral home of Norrathian nostalgia for me would seem to be the natural choice.  But EverQuest is also difficult for me to get into on a whim.  Basically, the live servers are out as everything past Luclin is “that new crap,” which doesn’t hold much interest for me.  An insta-85 character holds no fascination for me.  I could start from scratch again and visit old haunts with a mercenary in tow, but all of that is off the main path of the game and I would end up with yet another barely equipped and impoverished character.

I have a few characters on Fippy Darkpaw, but that server has probably run its course at this point.  And there aren’t even any mercenaries so I would have to wander about solo.

The Phinigel server, Daybreak’s “true box” attempt to fix one of the loudest complaints about past progression servers, was a possibility.  It has only been around since early December and is still in Kunark.  I might actually be able to find a group, though that was far from a sure thing.

Still, I wasn’t really feeling it for classic Norrath, which meant looking at EverQuest II.

I have a lot more investing in post-cataclysm Norrath, with characters between level 20-75 spread over three of the live servers (even after the server merges) as a start, plus a few characters on the Stormhold progression server.

I decided to go with Stormhold.  While it is down the path and into the Kingdom of Sky expansion, with the unlock vote in progress for Echoes of Faydwer expansion, EQII is also solo friendly enough that not being with the pack of current players won’t automatically make the whole thing a bust as it would in EQ.

And I made a few characters on the server back when it went live.  They are all past the Isle of Refuge, the initial nostalgia point for the server.

Past that and into the game though… well… with an eye to trying something different AND experiencing nostalgia, I decided to roll on the Freeport side of Norrath, and I am not sure how well that is working out, and whether or not that speaks to nostalgia or just the way the server was configured on that first pass.

The thing is that the quest path after the Isle of Refuge, through the Freeport sub-zones, into The Commonlands, and so forth feels a bit rough.  The pacing of quest chains often seems to assume you have gained a level with each quest turn-in, and unlikely scenario with the reduced experience gain on the nostalgia server.  And then I have the occasional quest giver suddenly present you with a quest five levels or so above the last one they gave you.  Meanwhile, the quests lines themselves also are not very good at sending you on to the next quest or the next zone or whatever.  This is not helped by the fact that my knowledge of Freeport was largely formed by a single character I rolled there about eight years back.

Of course, I am sure that the old quest chains on the Qeynos side of things feel equally awkward at this late date.  However, on that side of the world you still have the ability to opt into New Halas and vicinity, which is a very good and well structured solo-to-20 experience, form which you can pick up and head to Nek Forest or the Thundering Steppes.  Not authentic nostalgia, but then what is?

On the Freeport side your alternate option is Darklight Woods and the starter quest chain there which, upon trying it, sent me scurrying back to Freeport and The Commonlands.  I can deal with the patently ludicrous “we’re the evil faction so we have to be total butts to everybody, even those on our own team” that pervades Neriak, the rightly named “City of Hate.”  Horrible role playing, but whatever.  However, the layout of Neriak seems more likely to make it “the City You Hate.”  I have complained in the past about finding Freeport overly complicated in layout, but it is the model of sanity compared to Neriak.

So I spent a good chunk of my weekend in The Commonlands, chasing down cooking ingredients for Mooshga just outside the Freeport gates and picking up what quests I managed to find along the way while trying to gauge just how “heroic” heroic encounters really are.  I’ve forgotten how to read the finery around a mob’s name plate that indicates just how tough of a fight they are… beyond “more and thicker and having an actual probably makes them a tougher fight.”  My Shadow Knight managed a few levels during that time, and sits at 17.  Not quite enough to head into Nektulos Forest yet, which is where Mooshga has me going next, so I need to find some more quests before I decide to leave The Commonlands behind.

5 thoughts on “Looking for Nostalgia in The Commonlands”