Another short form post on topics about which I couldn’t quite get myself to crank out a thousand words… which is probably best for everyone involved.  Anyway, on with the items.

CSM 11 Elections Are Over

At one point this week somebody said the CSM elections ended on the 25th, and took that to mean that 23:59 UTC on the 24th was the last minute in which you could vote. Then it appeared the vote would go longer than that, with CCP Seagull telling people to go vote just a few hours back.  There was even a message in the launcher… finally… still active this morning:

However, checking the ballot page, it looks like the polls were already closed.

So now we have to wait until Fan Fest next month to find out the results.

If you have an expired EVE Online account, you can apparently come back for 10 days of play time.

Just log into the account management page and see if there is a special highlighted for you.

If there is, you can click on it to activate your account for that 10 day period to come back and see what is new in New Eden.  This is part of the Guristas hunting event that CCP has running now.

All the Newbie Info They Could Find

CCP continues to battle probably the most fearsome opponent EVE Online has ever faced, which is simply figuring out how to play the game and what to do.

They give you this little spaceship, and then what?

So CCP have put together a Dev Blog to list out many of the in-game, and a few out of game,  resources that might help new players.  While every little bit helps, I am not sure this will do much to overcome the desultory feel of the current new player experience.

Damn Wilhelm, back at it again with the CCP.  Yes, the February 2016 Economic Report dev blog came out nearly 20 days ago, but I was out of town at the time and just got around to looking at it this week.  Included with the report was my favorite graph, the ISK faucets and sinks. 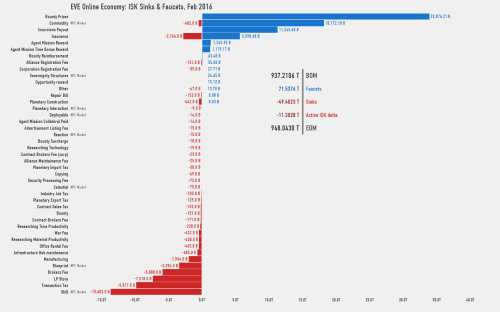 Daybreak announced a huge number of changes as part of the latest Landmark update.  There are things in there to make fans cheer and groan, not to mention the some skepticism about whether or not they will really ship this project during the spring with that many changes going in at once.  Changes to a complex project mean bugs, and there appear to be many.

But way down at the bottom of the update notes, under the heading “Other Changes,” there was this bullet point:

Given that Daybreak also just killed PvP, outside of battlegrounds, for EverQuest II, this might not be a surprise.

On the flip side, it is another deviation from the Minecraft model, a game which has a very active PvP community.  But with the big shared worlds of Landmark, you don’t get to choose who you play with, as you do with Minecraft, so perhaps just another nod to reality by the Daybreak team.  But who knows where things are really headed with Daybreak.