Saturday after the Meta Show, which featured Stunt Flores talking about his pay for performance SRP plan, a ping went out for Hurricanes under Jay Amazingness to clear the undock.  My theory is that EN24 is going to keep running stories about Saranen being “hellcamped” until it is actually true, because if 100 Hurricanes can brush off the camp, then it is not yet set to “hell” in my opinion.

We cleared things away but, it being a Saturday afternoon in prime time for EVE, the MBC wasn’t going to let that stand.  The first round of fighting was between us and a fleet of Circle of Two Omen Navy Issues.  This went better for CO2 than last time… no GigX kill mail for us… but we did strip off a chunk of their logi after which they stuck near the Abaddon fleet that showed up to counter our Hurricanes.

Abaddons show up to counter by the station

The arrival of the Abaddons and their Fax Machine support led to some jockeying for optimal position as we exchanged blows with the Abaddons, trading kills.  However, the Abaddons just kept coming, even as we were warping about the station grid the Pandemic Legion Fortizar kept spewing out more and more Abaddons to join the fight. 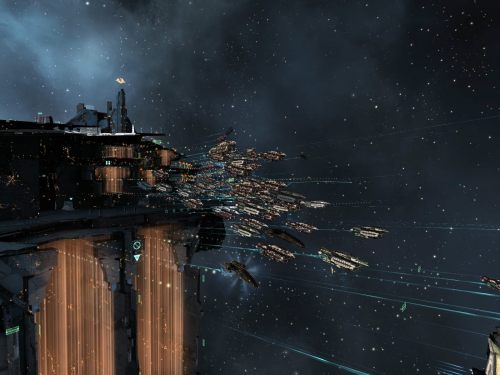 Pandemic Horde, absent from Saranen of late, also showed up in interceptors.  However, by that point DBRB had already undocked a Harpy fleet into the fray and, but the looks of the battle report, most of the interceptors were sent home the fast way.

PL and NCDot also logged in several titans and put them out on the station grid, either as bait or just to show that they could.  However, if they were supposed to be bait, we were not biting.  Jay warped us into range of the titans and had us take a quick shot at them, just because, and then had us align out and warped us off just as a pile of Abaddons were arriving on grid.  Those who didn’t align properly had a good chance of dying.  (There is a video of the goings on in the system, and you can see that particular moment at about the 5 minute mark.)

By that point the weight in numbers was heavily enough against us that we tethered up at one of our citadels and spent some time playing, “we’re watching you watching us watching you.”  We were not going to feed them any more kills, but so long as we stayed there on grid and tethered up, we were a fleet in being.  I had DBRB’s stream on in the background and I could still hear him leading his fleet around, landing to take a quick shot or two then warping off.

Eventually Jay docked us up so that those who wanted to go do something else could get out of fleet.  Another fleet formed up and took over the vigil, however the fun looked to be over for the moment, so I logged.  Overall we lost the ISK war, with us losing 54% of the 40 billion ISK destroyed over a few hours of shooting, according to the battle report.  We probably pressed home a couple more attacks than we should have, but it was a pretty even exchange overall.

Later that evening I was back at my computer and there was a call for a Harpy fleet under Thomas Lear.  I decided to go along in my new Griffin, a ship type which Asher had been handing out the other day in order to introduce some electronic warfare abilities to our Harpy doctrine.

I even invested in a SKIN for it

I had fit multi-spectral ECM to jam fighters, but Thomas called for three of the racial ECM jammers, Caldari, Minmatar, and Gallente, to be fit.  ECM isn’t completely new to me… after nearly 10 years of playing EVE Online I have run into ECM a few times… but it was still a role I had never flown before in a fleet.   Each of the four main factions has their own electronic warfare type.  I know, after many years, that the Caldari use gravimetric, which is blue, but I had to look at the module info to figure out that Gallente was magnetometric… which is the green ECM module…  and I associate green with their ships, so a decent visual clue… and that Minmatar was ladar and was red, which is close enough to rust to remind me which was which.

I had gotten that about straight when we undocked (again, the camp in Saranen not set anywhere close to “hell”) and started heading towards Deklein, where we have been operating recently, including the carrier kill I was on late last week.

Along the way I noticed that I was the only Griffin in the fleet, which I figured could be good or bad.  On the good side, I wasn’t going to have to worry about jamming the same person somebody else chose.  On the down side, being the sole ECM frigate seemed likely to make me a priority target.

We moved up through Pure Blind and Fade and into Deklein without incident, aside from a hostile shadowing us along the way.  The enemy would know where we were and what we were bringing, but we carried on.

We ended up settling into the northeast part of Deklein, in the N-U2LX constellation which adjoins to Venal, where we moved around, setting up for a fight.  Eventually trouble found us in the form of a Guardians of the Galaxy coalition fleet and we moved in for the fight.

At this point I had to do something with this ECM stuff I had been flying around with.  I launched my combat drone and then started playing “match the colors,” remembering to not bother jamming the primary.

I saw a few Amarr ships, but I didn’t have the Amarr racial jammer fit, so I put the multispectral jammer on one of those.  There were Jackdaws on field, so I put the blue gravimetric on one of them.  Then I saw that their logi was made up of Kirin tech II logi frigates, so I swapped it over to one of those instead.  I put the green magnetometric jammer on an Ares that was close by.  That left me with the red ladar jammer, which I put on a Bifrost that happened to be the first Minmatar ship on my overview.

All jammers were now running on whoever I happened to pick… the FC didn’t call for anybody specific to jam, so my choices were pretty haphazard… so I focused a bit on my combat drone, sending it after targets to try and whore on a few kill mails.

The fight seemed to go all our way and the enemy left the many wrecks behind when they warped away.

As we were recovering from that encounter I got a convo request from Hendrink Collie.  He happened to be a reader of the blog (so “Hey!” if you are reading this) and wanted to say hello.  He also turned out to be the FC of the fleet we had just fought and was flying the Bifrost I chose to jam, which messed up his target calling and likely helped our side in some material way.  Amazing but true!  Also, I put my drone on him at some point as well, so that shows up on his kill mail rather than my jams.

Then, as we chatted a bit, some Pandemic Legion Astartes landed on us and it was time to pay attention.  However, I did not have to pay attention for long.  Unlike the GotG fleet, the PL gang saw me as a priority target and I was blown up in fairly short order.  We were in a bubble at that point and, as the rest of the fleet burned out to warp away, I was caught and podded and was back in Saranen.  At least I remembered to insure my free ship, so betting against myself paid off.

Thomas Lear also got the chop on that encounter, though did not get podded so was able to get the fleet off mostly still intact.  Another bit of fighting that was pretty much a was on the battle report.

After that I hung around on channel until we got a participation link… gotta show the flag for TNT in the coalition… and then called it a night.

During that op in the Griffin I was too busy to take any screen shots it seems, but I did get a few more from the push and shove in Saranen. 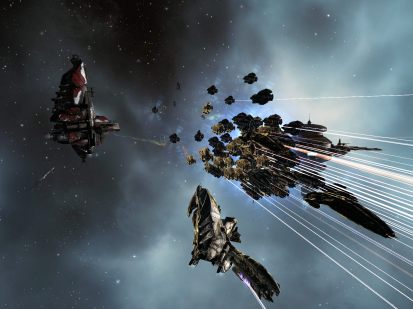 Abaddons show up to counter us 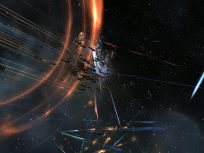 All sorts of colors in the fight

Abaddons undocking from the Fortizar

A Basi in the middle of the Hurricane fleet

Camera in among the Abaddon fleet

Hurricanes landing to poke the titans

And then aligning to warp off as Abaddons arrive

Hurricanes sitting tethered on a citadel