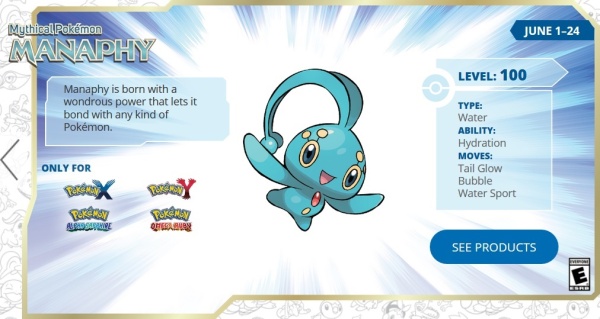 I remember Manaphy well as, during the Pokemon HeartGold & SoulSilver era, getting a Manaphy was my key to collecting all 493 Pokemon then available.  I had to play Pokemon Ranger Guardian Signs to get it and then use another DS to transfer it into SoulSilver, but the deed was done.  Then I left it in the Pokemon Day Care with a Ditto to breed Phione and, for a brief moment in time, I had collected them all.

Instructions on how to download Manaphy to your copy of Pokemon X and Y or Pokemon Alpha Sapphire and Omega Ruby are available on the Pokemon site.  You have until June 24th to make it happen.  There are other Manaphy themed items available as well.

The alleged reason for the Mew code is that the GameStop cards from February giveaway went very quickly and ended up on eBay selling for real cash money. 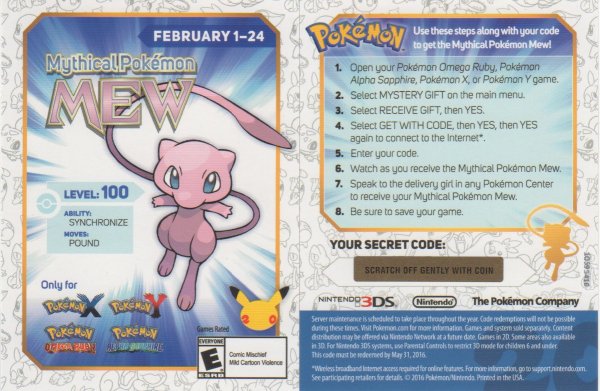 In order to make it up to fans who might have missed out on the GameStop card, this will be an opportunity to get the missing Mew.  The only catch is that you had to have signed up for the newsletter by June 1st, so I hope you are already on the list.

That is this month’s anniversary news.  The upcoming download events for the remainder of the year as we count down to the launch of Pokemon Sun & Moon are: