Daybreak is carrying on with its special server bonanza for EverQuest and EverQuest II.

Earlier this week the Race to Trakanon, the first “event server” for the company, went up for EverQuest II, and if you’re just reading about it here… well… you’re late!

Event servers are limited time servers that are setup for a special purpose, and the purpose of the Race to Trakanon server is just that, a race.  Focused in the Rise of Kunark expansion time frame, it is a race to level up, get achievements, and otherwise be the server first for whatever.

It is a race

By creating a new character on the server and competing, you can earn rewards that can be claimed by characters on other, more permanent servers.  There are more details here, while Feldon of EQ2 Wire has set up an Event Leaderboard over at his EQ2 U site. (Addendum: There is also a FAQ with more info in the forums.)

Even if you are not keen to race to level 80 or other such achievements, if you create a character on the server and get to level 10 before July 26, 2016, you will get a special mount that you can claim on every character on your account.

Not a bad mount compared to many in EQII

So there is that.  Telwyn seems to be on board.  For a mount on all my characters, I might just bang out a level 10 character while my account All Access remains active.  There is the catch, of course.  As with all Daybreak special servers, you must be an All Access member in order to play.  No Freeps allowed.

The server will shut down, and characters created will be migrated off to live servers, once the event is completed, with the run time being set at a minimum of three months.

Over on the EverQuest side of the house, there is a new event server as well, the Quarm server, which went up this week as well.  On the Quarm server you will start a new character at level 51 and pursue achievements and help defeat Overlord Mata Muram.  Details, such that there are, available here. (The FAQ in the forums has further info.) 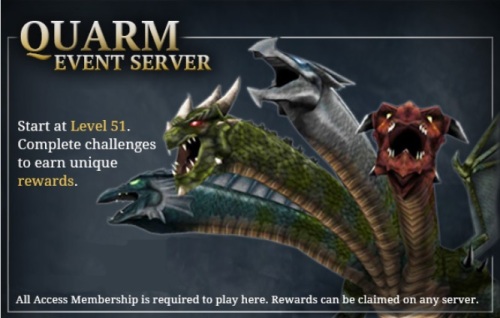 Will they get a Quarm

As with the Race to Trakanon server, the Quarm server will be temporary and characters will be migrated off when the event closes.  There is also a prize if you roll a character on the server before July 27, 2016.

Another potion… I wanted a mount

You do not even have to level up a character… since you start at level 51 in any case.

and, of course, it is open to All Access customers only.

Given that EverQuest progression servers tend to become races for raiding guilds in any case, I wonder how well this one will work out.

Meanwhile, since I am on the topic of Daybreak special servers, I want to note in passing that back on the Stormhold Time Locked Expansion Server, the vote to unlock the Rise of Kunark expansion has failed for the second time, with only 46% of those voting casting ballots in favor of the expansion.  There is probably a Brexit joke to be made about that, but I am not going to make the attempt.

1 thought on “The Race to Trakanon and Quarm Event Servers”