I was almost late to the party.

I saw the ping, Asher asking for max dudes in Discobricks, the current Augoror Navy Issue fleet doctrine (so called I imagine because the ship has all the graceful lines, and the innate toughness, of a brick, and shoots pretty colored lasers), but I was in the middles of something so couldn’t log in.

Then there was another ping.  And, as that ping started to go stale, to the point I figured that the fleet might have left already, I was finally able to launch the EVE Online client, get onto Mumble, and get my headset working… the latter being the biggest pain of the three, as my Logitech g930 headset seems reluctant to power on these days… and get in the game.

I had purchased an ANI previously and as I got onto coms the first thing I heard was Asher saying the work “undock.”  I quickly got into the ship and hit the undock button and had been sitting outside the station for about a minute before it became clear that he didn’t mean “fleet undock.”

He had been telling the dreadnoughts that would accompany us to undock and jump to the system where we would meet up with them.  The main fleet was still docked up.  Or most of it was.  There was me and about a half a dozen other ANIs lingering outside, having not understood orders.

I docked back up, insured my ship, made a couple changes based on the fleet MotD, and waited until we got the actual order to undock.  It came shortly enough, and we were soon streaming out of the station.

Another day at the Quafe Factory Warehouse undock

We headed off to a titan in order to catch a bridge.  I figured that with a few dreadnoughts in tow, we were off for a structure shoot.  It seemed unlikely that bait dreads were going to work again so soon after the Okagaiken trap.

That was fine with me.  On Reavers deployments Asher often had an oft repeated saying about putting money in the bank now in the expectation of it paying dividends later.  Setting timers one day will get you fights when they come out.  And so we wandered out to Cloud Ring, to the system 28O-JY, where Asher warped us to within sight of the target.  And it was a juicy target.

First sight of the target

That is a POS with a Supercapital Ship Assembly Array and a X-Large Ship Maintenance Array, which marks it as a place where the locals, in this case TISHU, builds supercaps.  That seemed to make the eventual fight over this POS almost inevitable.

We warped into range of the tower and started spreading out and shooting the POS tower.  Asher had asked people to bring along deployable warp disruption bubbles, which were spread around the POS to stop anybody from warping in with a load of strontium clathrates that could change or modify the timer for reinforcement.  There was a guy in an interceptor in the POS, and interceptors aren’t affected by warp disruption bubbles, but to bring in any usable amounts of stront they would need something bigger.

The shooting began and the shield began chipping away, slowly but surely.  A Dread Guristas Control Tower is a large tower which has 60,000,000 shield hit points.  We brought those dreads along for a reason.

When out to reinforce a tower, the goal is to get it down to the 25% mark, and which point it goes into its reinforced state and begins consuming the aforementioned strontium clathrates.  The amount of stront in the tower determines how long it will remain reinforced.  A large tower consumes 400 units of stront per hour and, with a full load, will stay reinforced for 41.7 hours.

When the stront runs out, the tower can be shot again.

But there is another key point in the initial POS shoot mechanics.  Once the tower gets below 50% shields, the owner of the POS can no longer modify the amount of stront in the tower.   At that point there is what there is, and Asher wanted to remove their ability to tinker with the stront in order to time the tower to come out of its reinforced state at a time that favored them.

So we overheated.  Some people went too far.  One of the dreads overheated and burned out their guns at just about the 51% mark.  But we managed to get the shields below 50% before any help could come.  A couple of hostile T3s had shown up in system at just about the 50%, but had been deflected and didn’t bother trying to get to the tower once the mark was passed, so it was assumed they might have been trying to fly in some stront at the last minute.

Now all we had to do was burn the shields down to 25%, at which point all of our guns and lasers would no longer be able to lock the target and the reinforcement timer would begin.  The dreads stayed sieged up and the ANIs flew in slow circles, lasers hitting the tower.

Passing over the SSAA, obscured by bubbles

The shields were ground slowly down until we were just getting to the 25% mark.  We expected to have the tower automatically unlocked as a target at any moment.  And then it went to 24%, and suddenly we all knew the word of the day was.

It was such a moment that I didn’t even have the presence of mind to take a screen shot until the shields hit 23%.

There is no stront

Things went from being almost done setting up a fight for the weekend to killing an expensive tower and module and aborting whatever supercapitals TISHU had building.  There was a moment of excitement where the urge to run out and tell the world about this was almost overwhelming.

This was quickly replaced by a sense of paranoia, a feeling that if we said this too loudly that it might go away, that the hostiles might come and save the tower, that something might go wrong.  In something of an, “I don’t know, just shoot casually!” moment, people started pretending on coms like we were still shooting tower and it hadn’t hit 25% yet.

But that didn’t last long either.  The tower wouldn’t have much life left after the shields were down.  TISHU was deployed down in the Syndicate region, so they seemed unlikely to be able to mount a defense at that point.  And nobody else seemed to be near by, except for a White Legion fleet.  Since they are allies, Asher invited them to come over and help finish off the tower.

Once we were past the shields, the armor and then the structure went down rapidly and the tower was destroyed, followed quickly by the SSAA and the maintenance array. 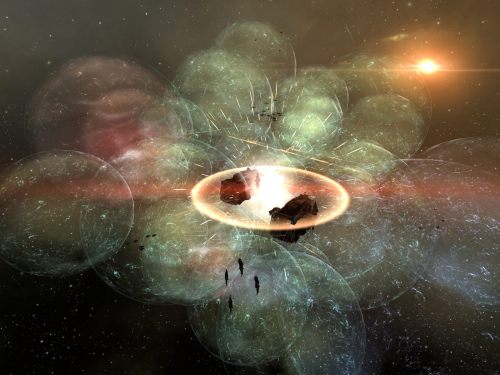 Death of a tower

A grand moment on a fleet where we expected to simply set a timer, and the obligatory Reddit thread was started.

As usual, there is no way to prove that anything was under construction in the SSAA, aside from the argument that people don’t put them up in order to let them sit idle.  Asher seemed to have intel that indicated there were two titans and three super carriers under way there, but unless we had a spy with an irrefutable screen shot, there will never be any definitive way to prove anything.  But whatever was being built there is gone, along with a few billion ISK in modules.

As we were leaving the area, our eyes in the system reported that the hostiles ran out to another POS they had in the system and pulled down the assembly array they had running, no doubt thinking we were headed there next.  Was there no stront available?   Anyway, I suppose we can claim a soft kill on whatever they might have been building there.

We shepherded the dreads back to their staging point and then headed back to Saranen and our home in the back of the Quafe Compay Warehouse, still pretty happy about the night’s events.

Screen shots from the fleet in gallery form:

Another day at the Quafe Factory Warehouse undock

First sight of the target

Passing over the SSAA, obscured by bubbles 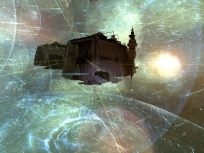 Another pass by the big targets

And then under them

Death of a tower

And the SSAA goes down

Bumping a Nag as we head home