When move ops were announced late last week and over the weekend I was a little confused.  Were people still back in Saranen?  Was the Rakapas Cartel getting anxious?  The pings were a little vague about the end points of these ops.

However, when I actually looked into what was going on, it turned out that this wasn’t about the move down from the north.  This was another move.  We were giving up our low sec staging base in Sakht and moving into Delve proper.  We were moving to D-W7F0, highlighted below on the map of the Delve region.

At a glance the system doesn’t look to be the worst spot on the map, but it seems like one might choose better when it comes to a staging system.  There isn’t even a station there.   However, this is one of those instances where Wollari’s wonderful maps do not really reflect the shape of space.  The region maps on DOTLAN are setup to show all the systems and the interconnection of gates between them.  These maps do not show the actual distance or relative position of systems in space.  For that you need to use the Range option under Navigation over at DOTLAN, which will show you a different map. 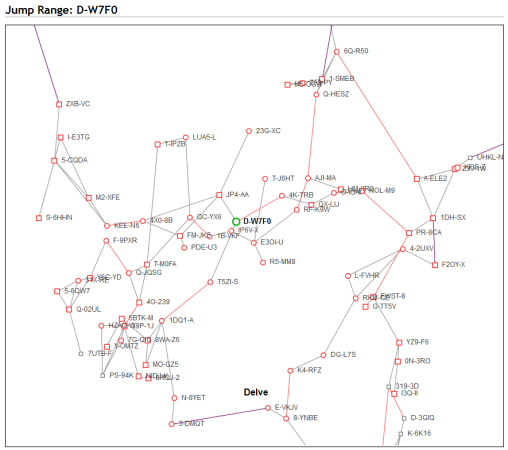 Where can I jump from D-W7F0

That map shows the relative positions of the systems in the game, and every one of them in red is within 5 light years of D-W7F0, which means a capital ship can get there in one jump.  There are 72 systems within jump range of D-W7F0 and, while eight of those systems are in Querious, that still covers a substantial number of the 97 systems in Delve.

As for there being no station in D-W7F0, we look to be living out of citadels now.  There are three Fortizars and a couple of Astrahuses setup in the system for us to dock up in.  One has been designated as our staging citadel and, thanks to last week’s update, which added contracts to citadels, pre-fit doctrine ships are available in addition to the market getting stocked.

Now all we lack is the ability to insure ships in a citadel, which seems like something that ought to have been added already, but who knows what the code looks like or what CCP’s reasoning behind its absence might be.

That is home now, which meant getting stuff out of Sakht.  For me that includes a carrier and a bunch of sub caps.  I took care of the carrier first, loading it up with all the ships I could cram into it, grabbing about fuel for a couple of trips, just in case, and undocking.

This was between the Astrahus busting fleets on Saturday night when Asher setup a move up for us.  It was supposed to be for subcaps only.  He has setup a bridging titan in 1-SMEB while RatKnight1 (of the Ratkingbois meme from our Wicked Creek deployment) kept a cyno going at the Fortizar.  But with lots of ships covering and a cyno in place, he said we could take our chances if we wanted to move a capital via the cyno in fleet.

This meant doing things with my carrier that I had not done before.  So far, I have only ever jumped station to station, with the exception of that jump to a citadel from Rakapas.  I actually had to warp the carrier. 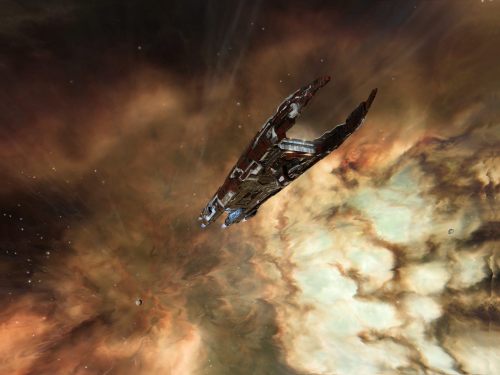 And it warps slowly

At the end of the warp, I had to take the gate from Sakht to 1-SMEB. 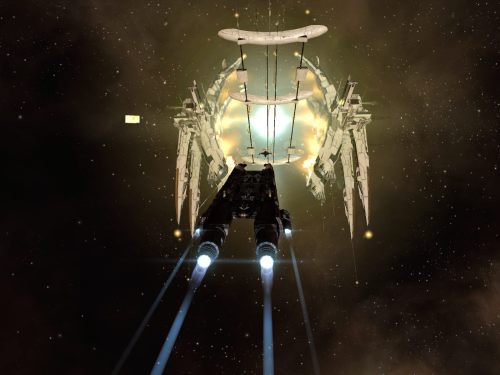 How do supers fit through this thing?

I had to do this because the jump gates between Sakht and 1-SMEB are of the very long range region connecting variety, so the distance covered is well beyond the 5 light year range limit.  Again, the DOTLAN route planner illustrates the path you would have to take to bypass the gate.

So I took the gate and jumped to the cyno once I was clear.

Then it was time to move some subcaps.

I remember back around the Phoebe release CCP was expressing concern that we might simply all use death clones to move about to bypass jump fatigue, especially after they removed clone costs.  It was part of the justification for restricting how one could set their home station. (Which also happens to be in the same time frame when we left Delve back in 2014.)

But if you are moving a ships between two points, death clones make it easy.  After docking up my carrier, I got out of it, undocked, and set my pod to self-destruct.  Upon my destruction, my death clone was activated in Sakht, where I boarded a subcap, took the gate to 1-SMEB, then Asher’s titan bridge back to D-W7F0, where I docked up, got out of the ship, undocked, and kicked off the self-destruct yet again.

Rolling up to a titan for a bridge

A few rounds on that with both my main and my alt… and a little jump fatigue… and I was pretty quickly out of Sakht.  Everything I moved south is now in a Fortizar in the middle of Delve.  Time to settle in, evict the current residents, and help put down the natives.  It is no longer the Guristas for ratting, but Blood Raiders instead. 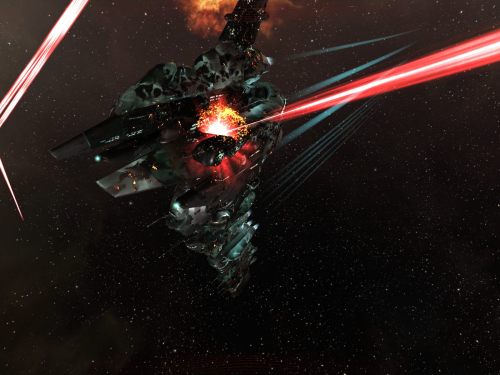 I just have to remember to not to go AFK in an anomaly when the doorbell rings.  At least I had gotten a couple of runs out of that Myrmidon and remembered to insure it.

So I am fully committed to Delve.  All my stuff is there now.

And it seems as thought TEST might have some commitment to Delve as well.  According to their latest (and very short) state of the alliance recording, they are being paid to come down to Delve and shoot Goons.

4 thoughts on “Committed to Delve Now”