We are almost done with the second week of the pre-Legion event and it seems like Blizz finally got the invasion event XP mix just about right just in time for the weekend.  The earlier statement about invasion events not being there to help you get characters to level 100 seems to have been replaced with the acceptance that this is something that people want.

So, as long as you are active in the events, there is plenty of sweet, sweet XP out there to be had.  Running invasions with alts was my primary gaming activity over the weekend.

I started off with a warrior I rolled up back in the Cataclysm era to try out the new 1-60 zones like Redridge, that I have been slowly leveling up ever since.  I last left him hanging about at the start of the quest chain in Borean Tundra.

I threw him into the invasions, which seemed to be popping up in three locations in the Eastern Kingdoms, Westfall, Hillsbrad Foothills, and Dun Morogh. 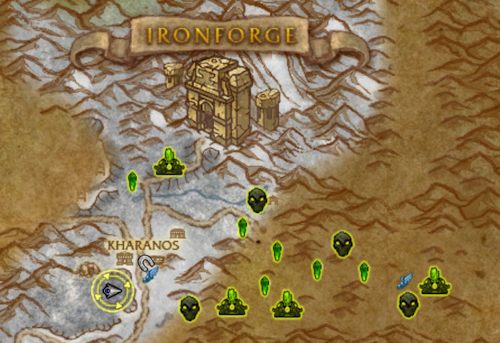 I was lucky in that somewhere along the line my warrior was grandfathered into the flight point allocation, as he had not been to the latter two locations previously, which meant an additional 15xp points per discovery.

Wearing a set of heirloom plate and having a full blue bar of double XP set, the first couple of invasions were worth more than a level and a half each, despite not having figured out the optimum path through the events yet.

I tinkered around with the various options that each invasion area lends you, which includes some vehicles.

A device of Gnomish origin for sure

I eventually found that the best way to boost the experience gained from an invasion event was to follow the pack when it came to stage three, when you are sent out to clear invaders from the zone, and to kill as many bosses as possible.  Fortunately, the pack was easy to spot in Westfall, which became my best XP spot for the event.

In the other zones, with their more broken terrain, it isn’t always as obvious as to which boss the main pack is headed.  I did okay, but Westfall seemed to be optimal for me.

The gear drops for him were pretty good though, wearing heirlooms, I ended up not using many of them.  It was interesting to see that the item level of invasion gear drops always matched up exactly to the current item level of his heirloom gear, so they seem to both be using the same scale.

I did sail over to Kalimdor once to do events there, but with a warrior who doesn’t have access to all the portals in Pandaria to make for short trips, getting over there was a bit of a chore.  I made the run once and then stuck to the Eastern Kingdoms, though I did hit 80 when I was in Azshara.

In the downtime after my warrior had hit the current invasions I pulled out my level 94 druid… not to be confused with my level 100 druid… to run some invasions as well.  Having two druids is a relic of a previous era when swapping spec’s cost money and going from feral to healing required an equipment change.  So I had one druid for cat form and one for healing.

My druid was up to level 98 before the end of Sunday afternoon and was able to do the Legion Broken Isles invasion event, for which he was severely under geared.  Invasions dropped some upgrades, but for the sparring part of the first quest chain, the NPCs were owning him badly.  I had to go scrounge some better gear and buy a better weapon from the auction house, at which point I was able to make the damage check and move on through the event.

I was happy enough to do that, knowing that I would end up with a much improved weapon.  The second event, last week’s “follow Khadgar around as he goes full ‘onion on my belt’ as you try to keep up” challenge, I wasn’t so keen to run again.  However, Khadgar’s Upgraded Servant is on persistent NPC.  It was leaning over my shoulder or chasing me around Stormwind with that great big exclamation point over its head and would not let up.  I last saw it as I was flying off to Westfall yet again, tearing across the city trying desperately to keep up just in case I wanted to accept its quest now dammit.

All in all, I had a good time with the invasion events over the weekend and felt like I made a good deal of progress.  My warrior made it to 84 and my druid is up to 99, though what I am going to do with two level 100 druids remains a question.  One might need to be transferred to the Horde.

My daughter also got out a few of characters and started the climb to 100 with them via the invasion route.

The only real annoyance was the sort of insta-kill attacks that each of the major bosses in the events seemed to posses.  I don’t mind dying, so long as I have a chance to avoid things… circles on the ground, the boss winding up for the big hit, or some such… but there were any number of times when I went from full health and attacking to dead in the snow yet again without any noticeable event in between.

Maybe I’ll just stay down for a bit

Probably the most ridiculous example of this was a final boss fight in Dun Morogh where the battle got pulled on top of the graveyard and so I kept respawning and dying before I could get clear of the next big insta AOE attack.  I went from fully repaired to paper doll warnings pretty quickly.

Anyway, overall I was happy enough with the events, and dying every once in a while is just a cost of doing business, so to speak.  Now to see what will come with Tuesday’s update as we get into the final week before WoW Legion hits.