About a month back in one of the weekly fireside chats, The Mittani promised us a new doctrine, a battleship doctrine.  About two weeks back, the doctrine was revealed.  It would be centered around a mix of Bhaalgorns and Abaddons.  Last night, after leaving some time for the supply chain to catch up, it was time to undock to doctrine for the first time.

Turnout wasn’t bad for an op called in the later USTZ and which had a parallel capital operation running at the same time.  We didn’t fill the fleet, but our number was well over 200.  I was going to grab an Abaddon… Bhaalgorns are cool, but they are also half a billion ISK and I like to let a doctrine settle down and become a standard before I invest that much ISK… but I was late to the market.  All the Abaddons had been bought out.  But that was okay, as the doctrine used the same logi fits for Oneiros and Guardians as our other armor doctrines, so I was able to pull out a Oneiros and join in.

The Bhaalgorns, being a Blood Raiders faction ship, naturally has the Blood Raiders style paint job.  And a skin of the same style for the Abaddon was part of a past event so was pretty readily available, so a number of pilots were able to match up.

Hanging on the Fortizar waiting to go

The Oneiros needs a decent skin.  There are three available from CCP, but they all turn a mostly dark colored ship into a slightly different but mostly indistinguishable dark colored ship.  There isn’t even a Quafe skin for the Oneiros.  It needs something bright and shiny.  Gallente Problems.

The fleet’s destination was Fountain, to face The-Culture and assail their holdings in the region, with Asher getting the honor of leading the new fleet doctrine for its first run.

Going to Fountain always brings back memories of the Fountain War.  So many systems there bring back memories of events now three years gone. (A summary of my posts from the war here.)  It was also a time when I was very active and always flew in main fleet.

Of course, being in main fleet again reminded me of the downsides of being there.  It wasn’t horrible… often it was unintentionally funny to me… but after a long stretch of smaller fleets and my time in Reavers, it was chaotic coms and me thinking “Can you just shut up?” as people ran off at the mouth about unrelated items.  I tend to be very good at coms discipline and take it seriously, and when you get 200+ people together… more than that because the battleships were sharing coms with the capital fleet… there is always somebody who picks the wrong time to start talking.

The-Culture put out a fleet of Ishtars to oppose us at one point, but things were not in their favor and they withdrew that after a while, content to just harasses us with interdictors when they could.  The counter to this in our new doctrine is smart bombs.  Each of the Bhaalgorns was fit with a smart bomb, a weapon that shoots out a burst that hits anything within a limited radius of your ship, friend or foe.

This led to more unintentional comedy.

There is a joke that is not really a joke wherein one says, “Did he say jump?” when holding on a gate.  When everybody is there waiting for the word, just saying the word “jump” even in the sentence “Do not jump!” will cause some people to hit the button and go through the gate.  Everybody is hanging on, waiting for that one word and sometime they won’t process the context until after they have acted.

Well, having smart bombs on our shiny new doctrine ships seemed to end up with the same sort of thing, wherein any time somebody used the words “smart bomb” the Bhaalgorns would start lighting them off, even when those words were embedded in the phrase, “Will you stop using your fucking smart bombs!” 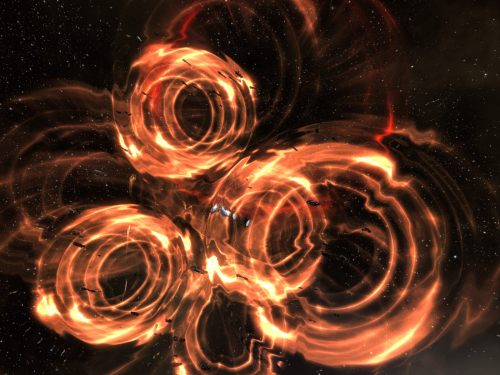 Did you say “smart bomb?”

I am not sure if we killed any of our own that way, but small stuff had to get the hell away from the Bhaalgorns, everybody had their shields stripped away, and logi spent some time running armor reps to repair this self-inflicted damage.

Once the enemy Ishtar fleet retired, our job of covering the capital fleet left us chasing around various interdictors who were trying to bubble us and the capitals just to make everything go slower for us.  As part of that I got to watch one of our pilots in a command destroyer use that ships special AOE micro jump drive to “boosh” interdictor bubbles off of the fleet. (“Boosh” is the term of art for using that drive.)

The micro jump drive spinning up to boosh a bubble

This actually seemed to work pretty well, given that it takes a bit of skill as the pilot must align and time their jump to get things done right.  Only once did things go awry, when a bunch of us who had gotten out of a bubble by turning our prop mods on had the bubble dropped on us a while later.  At least it was off the capital ships.

As the op began to reach its conclusion, we met some of the capitals at one of The-Culture’s POSes where they were building capitals.

The tower was but into its reinforced state as we arrived, but the subcaps joined in to take care of some of the modules, especially the jump bridge array.  First we shot it until it was past shields and armor and into structure.

This is what is know as a “dick move” designed to cause the enemy the maximum amount of inconvenience.

We also knocked out a couple of faction modules they had on the POS.  Then, as we waited for the caps for form up and get on their way, we shot Thomas Lear in his Damnation, just to see how tough that command ship really was.  Then we set ourselves to shepherding the capitals back to Delve.  Once they were within range to jump back to their staging, we were released to burn home ourselves.

The fleet ran past the three hour mark and was a reminder of the ups and downs of being in main fleet.  Now a bunch of timers have been set in Fountain though, so main fleet will be returning soon to contest them.

Addendum: I missed to follow up op, but The-Cultre assembly arrays were destroyed.

Hanging on the Fortizar waiting to go 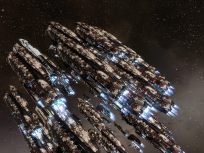 Bhaalgorns and Abaddons in warp 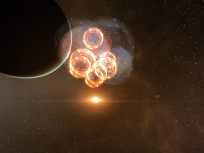 Did you say “smart bomb?”

More comedy as we bubble ourselves on a gate 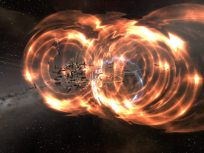 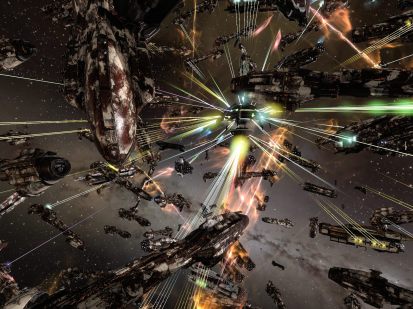 Closer in on the jump bridge

A Bhaalgorn using its lasers

Thomas webbed but getting reps

2 thoughts on “Bhaalgorns to Fountain”