A bunch of people are talking about Civilization VI, which launched this past Friday.  The reviews seem to be very good and the usual gamut of launch day issues do not seem to have hit this release.  It is almost like Sid Meier’s team learned something along the way with all these Civ and Civ-like releases.  Maybe leaving the Mac OS version for later helped.

Anyway, with so much talk about Civilization VI I took it as a sign that I should… go buy Stellaris.

See, it says Stellaris right there

It was on sale… half the price of Civilization VI… and had been on my Steam wishlist since before it launched.  Still, I was a bit hesitant to buy it.  The problem is that it comes from Paradox Development.

Which is not to say that there is anything wrong with Paradox Development or that they are bad people like the senior management of EA or anything.  They are, in fact, my favorite development studio when it comes to creating games that make me feel like a drooling simpleton.  I must own almost half their catalog of games, purchased over the years, and yet my combined total play time for all of those titles is still probably less than my play time with Civilization V.  Fortunately I think I have purchased most of them as part of Steam sales at this point, but still.

Paradox games are deep… as in fall in, founder, and quickly drown levels of deep.  There are always lots of moving parts that influence each other that you have to keep track of so that the initial experience for all of their games seems to be getting totally lost in a morass of details thrown at you in rapid succession that quickly leads to overload, exiting the game, and rarely, if ever, returning to it.

And while I hate to point fingers at the tutorials, because tutorials for complex systems difficult to do at the best of times, they do often come off in the same way that a lot of technical documentation can.  Which is to say, it was created by somebody who already knew how to do what they were trying to tell you to do, so the effort tends to have gaps because some level of knowledge is assumed.  Things like navigating the UI, or even where a UI element is or how one is supposed to interact with it can go missing.  And even when that is there in sufficient detail, tutorials can often devolve into lessons in “what” and not “how.”

As an example, I work on a development environment for creating speech applications.  The documentation for the IDE is hundreds of pages long and goes into detail on every aspect of the product.  If you memorized it completely, you would know the function of every menu item, check box, tag, and attribute, but you still wouldn’t know how to build a speech app.  Nobody wants to put more documentation on the schedule, so when a dev wants to know how to do something we write it up… or build a sample app… and save that away in case the question comes up again.

I have had problems with both of those things with Paradox games, learning all the details (information overload) and fitting all that information into a bigger picture (why do I want to do that and what does it really affect?)

And I ran right into that again with Stellaris.  The game runs on the Clauswitz Engine, which underpinned Europa Universalis III and all their games since, so Stellaris has a similar vibe to it.  And, like other titles on the engine, it is not turned based but runs… I hate to say “real time,” but things move forward continuously unless the game is paused.

The Stellaris tutorial reminds me very much of our documentation, in that it is very active in telling you what things are, but doesn’t do very much to build the bigger picture, and in a game of galactic empires, the big picture and how things fit into it is literally everything.  Meanwhile, stuff it happening… unless you pause, at which point nothing is happening.

After a couple of unsatisfying runs I decided to turn off the trivia tutorial, which at times was less helpful than Clippy, who at least wanted to help me accomplish tasks, and just try to learn bits and pieces of the game.  The tutorial voice said I would be sorry as I hit “NO TUTORIAL,” but it was wrong. 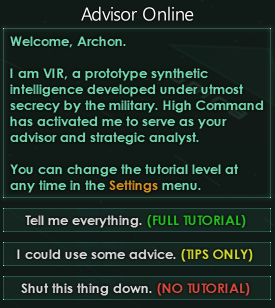 Here I put out my plea for the makers of complex strategy games to include a push-over AI mode/setting.

Last Friday’s post about Civilization VI included a list of my favorite games from the series, with Civilization II at it usual top place on the list.  One of the reasons it is there, that I played so many hours of it, that I could play it at its hardest setting, was because I was able to learn the mechanics of the game at the easiest setting in a real game where the AI wouldn’t trouble me so much.  Investing time experimenting with cities at chieftain level let me win at deity level.

Getting there one step at a time

Stellaris, like many strategy games, eschews the idea of easy.  Their difficulty settings are “Normal,” “Difficult,” and “Insane.”  If you wanted easy you wouldn’t buy games from Paradox I guess.  Still, I managed to tinker with some of the other settings to take a bit of pressure off so I could play to learn.

Somewhere on Saturday afternoon things started to click a little more.  I played a couple of games where I focused mostly on learning space related things along with resources and at least trying to speed up tech research.  Of course, that focus ignore planetary economies, which eventually hamstrung me on each game, but I got one aspect settled.  Sunday I played with tech, and over the week I started tinkering with planetary populations.  With each step I folded in a little more knowledge.

And so I reached the point where I actually felt like I was playing the game rather than struggling with it. (Something that might have gone a bit more quickly if I had found their wiki with its Beginner’s Guide earlier.)  And, now there, I am beginning to appreciate how good the game is.  I expect I will spend quite a bit more time playing it.

Of course, one of the things I like about it is the ability to create your own factions.  While I am not a huge fan of mods, I do like the ability to personalize things.  So, of course, I created a familiar faction. 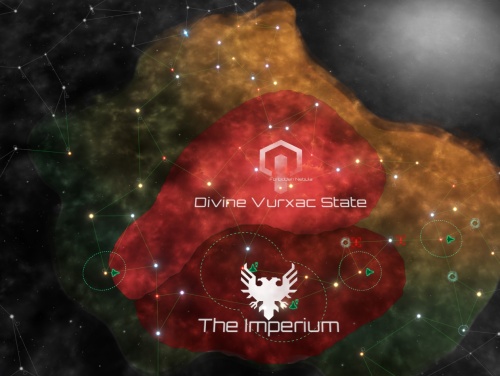 Vying with a neighbor on the galactic map

In something that hearkens back to the old days of Civ II, the naming schemes for civilizations are all in text files.  In Civ II I got tired of my sprawling empires running out of names, so I found the text file where they were stored and added more.  Then I started making up my own empires.  It looks like I will be able to do the same with Stellaris.  Or maybe I will grab some of the fine mods available in the Steam Workshop.

Can I mix the Lovecraft with the cats mod?

All of which doesn’t mean I am not going to buy Civilization VI.  I just have Stellaris to keep me occupied until the time is ripe.  And since I have gotten past the initial steep learning curve and am enjoying the game quite a bit now, that purchase might be pushed off further than I thought.  Space is fun.

The start of another space empire

TL;DR version: Deep. Not as hard to get into as some Paradox games, but still takes effort.  Space made it more approachable for me.  Looks cool, plays great.  Instead of “just one more turn” it is “just let me get that next tech” or “my fleet upgrade is almost done” or “my science ship needs to explore another anomaly” and suddenly you’re up way past your bed time.

[Also, while the Steam sale ended, it is still on sale for the moment at the Paradox store, and since you have to activate it on Steam, you end up in the same place.]