The tenth BlizzCon has come and gone.  It always seems short at just two days.  Even wee EVE Vegas ran into Sunday.  But Blizzard knows how to pack a bunch of stuff into two days. 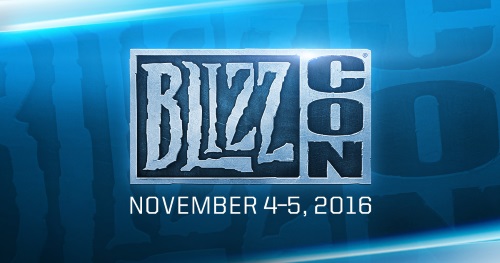 Granted, most of what was packed into those two days wasn’t of interest to me.  If you got the Virtual Ticket as I did you found out pretty quickly that four of the six available streams were devoted exclusively to “esports.” 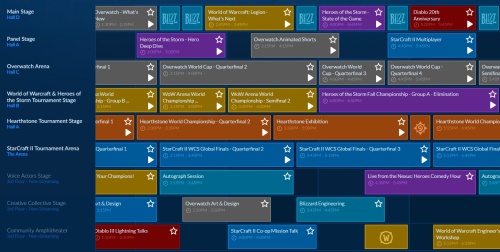 A schedule snippet – smaller dives into products not streamed

I was also mildly amused at the confusion over this being the tenth BlizzCon, as announcers kept saying “ten years of BlizzCon,” which is incorrect.  The first BlizzCon was in 2005, but they skipped 2006 and 2012.  So ten BlizzCons, not ten years.

However I was not amused at all to find out that the “Weird Al” concert at the closing ceremony was only viewable live with the Virtual Ticket.  We were out when th concert kicked off, but I figured I could watch it the replay the next day.  Blizzard makes a point of saying that we get to view replays for 14 days.

The concert appears to be an exception though, as it is not available in the video archive.  Since that was one of the key reasons I bought the damn virtual ticket, I am pretty unhappy with that.  I am sure it says something about the concert in the fine print somewhere, but if it had been more obvious I would only have the one chance to see it, I would have made an effort to be home for it.

Anyway, enough carping about that I guess.  Did Blizzard cover what I thought they would?

There was a time when BlizzCon could have been called “WoWCon.”  A decade back World of Warcraft was pretty much their only going concern, the company having been practically swallowed by the overwhelming success of the game.  The next release after WoW was StarCraft II, six years later.

For long time observers of BlizzCon, the event has gone from WoW being the only story to now having to share the stage with five siblings.  And since WoW is clearly past its peak, it is in Blizzard’s interest to promote other titles.  The Azeroth gravy train isn’t dead yet, but some alternative revenue streams are clearly part of the plan.

So WoW, which just got an expansion (along with a movie) recently, did not get much attention at the keynote.  I saw some bitter comments on Twitter about Blizz passing over WoW, but it is to be expected.  You had to get into the “Legion – What’s Next” panel to get any details about the game.  Here is what I thought Blizz was going to talk about when it came to WoW:

We got a bit of the “woo hoo! Legion!” at the keynote (fastest selling blah blah), along with a mention that Blizz would continue delivering content for the expansion, and a plug for the film (now available on DVD and Blu-Ray).

At the Legion panel they went much deeper and covered what will come before 7.2, 7.2 itself, and and eye to what 7.3 will bring.

So what I would consider the minimum was pretty well covered.  I do wish that Blizz was still announcing subscriber numbers, if only to see if a constant stream of content really does make a difference.  After all, Warlords of Draenor may have left people high and dry for a year, but the big dive in subscriber numbers started well before we hit the 6.2 patch that opened up new content and, eventually, flying.

Speaking of flying, 7.2 patch is also supposed to bring us to the point where we will be able to unlock flying in the expansion.  That will give us all something to work on when it hits.  I doubt I will move a single alt in the Broken Isles until I unlock that with my main.  So that point was covered.

I saw nothing about any special, nostalgia, or retro servers, so pretty much as expected.  This did not sit well with the Nostalrius crew, which vowed to return.  I don’t think they understand how slowly (and conservatively) the wheels grind at Blizzard.

And I didn’t hear any Tom Chilton quotes, regrettable or not, so I guess Blizz kept him busy elsewhere.

All in all, not a ton of news about WoW, but about the minimum amount of news that Blizz needed to provide to keep fans going.

Here is where I had high expectations.  With the 20th anniversary of the franchise just weeks away, I expected the announcement of Diablo IV or, at a minimum, a new expansion for Diablo III.  Diablo III is well past the four year mark, and the Reaper of Souls expansion is 2.5 years old now.  As a franchise that makes money by selling boxes, it sounds like it needs a new box on the market.  Anyway, this was what I put down:

We didn’t get anything about MEUs or China, but the Diablo 20th anniversary was covered and we are getting something new.

Just not a new game or an expansion.  Well, “sort of” on the expansion front, but I’ll get to that.  And there will be new zone content coming to appease the people doing season runs.

Instead, to feed the nostalgia hungry, they are remaking the original Diablo in Diablo III.

I think this is something I actually put forth as an option in a previous post.  Yes, here it is… “Diablo and/or Diablo II being ported to the Diablo III engine.”

So that sounds pretty interesting, especially since they are attempting to simulate the more primitive graphical style, movements, and sounds of the original.  I am very interested to see how this ends up playing.

The downside is that they are going to make this a special event called “The Darkening of Tristram.”  This event will only be available every January in order to mark the launch of the series.  So I hope you are in the mood for nostalgia then, because you won’t get to play it for the rest of the year.

The other big announcement was the addition of a Diablo II class to Diablo III, the necromancer.  Blizzard has a post here about it.  Interesting, and a clear nostalgia play, but the necromancer was never a big deal for me.  This will be part of a Rise of the Necromancer “pack” which will be available at some future date with some unspecified amount of content (or not) for some unspecified price.

So you can say they announced an expansion… they just didn’t tell us enough about it to get a feel for what it will really be.  If it is just a “buy a new class” thing that they have announced so far, then it doesn’t really count as much of an expansion in my opinion.  If it ends up including more levels (which will be awkward after paragon levels and all that) or a new story line, then we are there.

Finally, we did not hear anything about the Diablo II remaster that they were advertising for last year though.

My interest starts to wane about here.  I like StarCraft for nostalgia reasons, I played a lot of the original back in the day.  But I don’t even own StarCraft II, much less any of the expansions, so my opinions here are dubious at best.  All I know is what I heard at the keynote.  What I said:

There was a firm date announced for Nova Covert Ops part III.  Previously listed as “before December 1” it will be available on November 22.  There was also something about StarCraft II being used in conjunction with AI research, a new story line, new maps, and “War Chests” coming to the game.

There was also plenty of tournament play.  There was, however, no mention of the original StarCraft being remastered.

And then we get to the three Blizzard titles where I have no investment.

No Manic Murloc Melodrama mobile app.  No Overwatch on MacOS either.

On the other hand, SynCaine’s suggestion that Blizz might not mention Heroes of the Storm was totally unfounded.  They are still fully behind the game and, as you can see by the schedule snippet I have at the top, it had a whole channel dedicate to league play.  They even mentioned the Cho’gall unit from last year, though they did not say if it ended up being all that popular or not.

In fact, most of the keynote seemed to be devoted to these three titles and all of the new stuff they are getting, with Overwatch even getting a new league devoted to it, and how much Blizzard has been paying out in prize money over the last year.  None of that interested me as I am not an “esportsball” fan.

And, of course, I may never know if “Weird Al” had a song about a Blizzard product.

So that was that.  It was interesting to see the keynote and a couple of the panels, but without the concert I feel like I wasted $40 as I could have gleaned all that information and more by just reading the gaming news.

Remind me of that in a year when BlizzCon returns.

9 thoughts on “Scoring My BlizzCon Projections”