I mentioned in passing last week that the previous Monday saw the release of Minecraft 1.11, the Exploration Update.

Two of the new items that came in with this update were woodland mansions and llamas.

I was, of course, keen to find me some llamas.  You can tame them and then dress them up to give them a festive look.

Aaron, keen for a new challenge, was more interested in the woodland mansions.  Finding one, however, was the thing.  They are rare, they are reported to spawn at least 10K blocks away from the spawn point, and you need to find them in territory that has not been generated yet.

Fortunately, the 1.11 update also includes a new village NPC called the cartographer.  They wear the same white coat as the librarian in villages.  Once properly primed, they will sell you exploration maps.  There are two flavors of such maps, one that will guide you to an ocean monument (boring, I know where several of those are, not including the one Aaron took over and turned into a guardian farm), and the other will direct you to a woodland mansion.

Aaron got right on that, breeding a cartographer in his villager mall, though the first I heard of it was in an email from him to the group announcing that he had found a woodland mansion.  Since he was already there, I downloaded a copy of our world and rendered and updated map to see where it was.  Sure enough, I found his mansion.

Woodland Mansion on the map

That is the mansion, with a little dirt structure Aaron build outside the front door to act as his camp.  The mansions are pretty bit structures.

Of course, the other thing the newly rendered map showed was how far from our core explored area he had to venture to find this new structure. 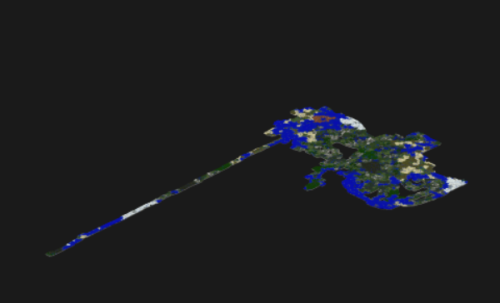 Straight line to the Mansion

That long, straight explored part jutting out from the west of the main map, that was path to the mansion.  It is admirably straight.  Of course, I wanted to go see the new thing in the world.  Getting there though…

Aaron reported that the mansion was at about the coordinates x -21,000 z -6,000.  The nearest easily traveled to spot in the explored world was the prismarine bridge on the great rail loop.  It stood at about x -1,000 z -6,300.  So just 20km to travel.  For perspective, the great rail loop is about 22.5 km, full round trip, and it takes a few day/night cycles while moving at minecart speeds.  I wasn’t sure I wanted to walk/row my way out to the new mansion.

So I started checking out our nether roof transportation network.  Traveling in the nether gets you 8 blocks forward on the surface for every block you move there.  I thought that the nether rail line to the prismarine bridge might be a good place to start down there.  But then I discovered a rail line Aaron had dug out to where he planned to create a wither farm at some point.  That line ended at x -754 z -710, which put it well on its way to the nether coordinates of x -2,650 z -750 where a nether portal would put any traveler close to the mansion.

I was there, had my diamond pick with the mend enchant, so started digging through the netherrack towards those coordinates.  I didn’t want to walk, but if I can build infrastructure, I guess that is a different story.  From where I was it was just about 2,000 blocks to go, digging a tunnel 2 blocks wide and 3 blocks high.

Actually, clearing the ~12,000 blocks to get there was less of a chore than doing something with those blocks once they had been dug.  The pile up in stacks of 64 in your inventory and, not liking to leave things cluttering the tunnel, I ended up having to run back to the start point of the dig, where there were a couple of chests, to dump the netherrack as it filled up my inventory.

I dug for quite a while, ending up close to the -1,600 line on the x axis, though I did have to travel back to the zombie pigmen harvesting farm to let experience repair my pick.  That is the joy of the mend enchant.  I also laid some track I found down there to start the line to the mansion and to make traveling back and forth to the dig easier.

At some point I called it a night, but Aaron had gotten back to out nether travel nexus and picked up where I left off, pushing the bore the rest of the way.  He also put up a portal about 250 blocks down the new line, with a stop, so that it came up where he had seen llamas during his trip to the mansion.

A family of wild llamas in the high peaks

I caught him online the next day when he was just about done with the work.  I rolled down the line to its end point, found it empty, then started to roll back the other way when I ran into Aaron.  The problem with single track rail systems.  He was coming back with some obsidian blocks in order to make the portal.  So we rolled on back to the end again and he put together the blocks.

Aaron building the portal in the nether

Once together he sparked it up and let me go through.  Of course it was night time, raining, and the portal was in a tree, out of which I promptly fell, leaving us to fight zombies, spiders, and skeletons.  The raid killed off the fire enchant on my bow making killing stuff all the more annoying. 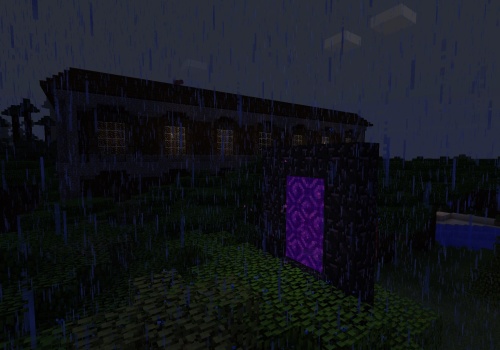 The new portal in its tree

But it was at the right location and on the surface rather than way down in some deep cavern.

during a lull in the fighting I built some steps up to the portal and went back into the nether while Aaron used the bed in his mud hut to advance the world to morning.  Then the sun came up… but since we were in a forest, there were still a few more things to kill.  But after that I was able to actually turn towards the mansion itself.

I have to say, that as an auto-generated structure in Minecraft, the woodland mansion is pretty impressive.  Aaron had already cleared out the resident bad guys, so I was able to explore the place relatively safely… there was a creeper hanging out, because there is always a creeper hidden somewhere.

Mansions have a variety of possible rooms according to the wiki, ranging from functional to silly.

There is even lighting and carpeting throughout, though there isn’t quite enough light by default to keep mobs from spawning.  As a structure it would be a fine place to make your base, especially now that it has rail access to our central hub. (Though even rail travel, moving 8x surface speed, it takes a good seven minutes to get out to the portal.)

Then the question was where to find the next one for those of us who wanted to try our hand with the new illager NPCs.  As it turns out, any given cartographer villager will only give out a map to a single woodland mansion.  In order to find another one, you need to buy it from a different villager.  Time to expand the villager population in hopes of getting another map… and go check out the llamas.

Meanwhile, as an update to the previous Minecraft post about map art, Aaron took what he learned and put together another piece.  Here it is when viewed from ground level.

Some colors in a field

Given that, can you guess what the end product looks like when on a map?