With the Ascension expansion in EVE Online and Pokemon Sun & Moon having landed last week, I was perhaps a bit surprised when I ended up playing more Minecraft than anything else over the weekend and since.

Of course, there was a Minecraft update and Aaron’ mansion adventure to inspire.  After that I decided I wanted to go find one as well.  That meant getting one of the new cartographer villagers to spawn, since each one only sells a map to a single woodland mansion.  I headed to one of the villages I had walled in, lit, and tended to, added a bunch of additional doors (as the number of doors dictates the maximum population of a village) and started feeding the current villagers their favorite things to get them to produce new villagers.  I managed to get a cartographer on the second try and, after he grew up and I stuffed him full of paper to encourage his trading, he offered me a new woodland mansion map.

The maps are somewhat generic looking, giving you a general sketch of the area where the mansion is placed.  It also puts a little marker representing the hold, which shows your position relative to the destination.  The marker gets bigger when you get close, and once you get on the actual map grid, it begins to fill in like a regular in-game map.  I forgot to take a screen shot of my initial map, so here are a couple of samples from the wiki.

A cartographer with woodland mansion and ocean monument maps

Map in hand, I put together some supplies… a full stack of food, a set of tools, four stacks of torches because I like to light things, flint and tinder for when I really want to light thing up, a boat, 10 obsidian blocks, and a stack of wood.  I didn’t have any wool handy from where I set out, so I took a pair of clippers along as well, hoping to shear some sheep as I went.  That actually worked out well, as sheep were plentiful at various points.

My map showed the mansion I was seeking was northeast of where I was (Aaron’s mansion was to the west) so I set out to find it.  I left our explored area north of the prismarine bridge on the rail line.  North of there is ocean, so I was hoping to travel as far as I could by boat, which is both fast and doesn’t require you to stop at night.

And, as it happened, I did manage to make much of the trip by boat, though I did have to cross stretches of land at times, including the last stretch.  I moved northeast when I could, trying to get my little marker to move.  Eventually I found myself lined up on the east-west axis, and just had to travel north.  After a couple hours of travel I eventually found myself on the map grid and closing in on the mansion.  My path was a little more wandering than Aaron’s, as a render of the world after I arrived shows.

I was up past the -26,000 line on the x axis, though still lined up with our core area on the z axis.  But I had found the mansion. 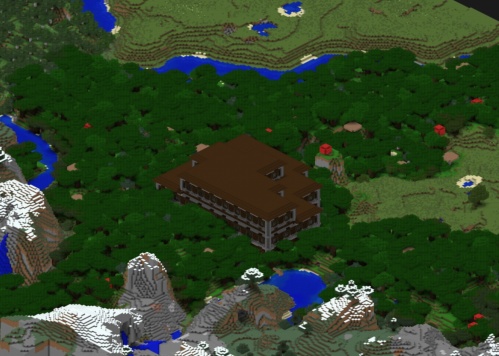 The mansion in the woods

Following Aaron’s example, I built a small house outside the front step of the mansion.  There was plenty of wood to hand, being in the middle of a canopy forest, so I was able to build all the amenities.  I also setup a furnace, fueled by wood, in order to turn wood into charcoal to resupply my torch supply, which had run short.  And even still there was so much forest about that I started setting fire to it just to get a some sky above me.  Slash and burn exploration.

I did managed to not burn down the mansion by removing trees that were up against it before I started setting things alight.

With more light shining everywhere, I was feeling better about diving into the mansion.  Aside from the usual monsters that spawn in the dark, there were some vindicators and evokers, the new “illagers,” to take care of.  Both seemed susceptible to ranged fire, so I stood back with my bow and killed them.  The vexes, summoned by the evokers, were the most difficult to deal with.

The mansion cleared, I explored its various rooms and stowed away my loot… including five totems of the undying.

That done, I was there, more than 20km from the nearest outpost, with a big mansion and dwindling supplies.  The mansion was a great place but, when it comes to the usual real estate litmus test, it failed on the top three items, “location, location, location.”  I was sort of stuck.

I did manage to pick up some additional supplies.  Along the way I found a desert temple, which I setup as a living station.  On clearing that out, I obtained some watermelon seeds and a saddle.  I also picked up a potato somewhere, probably from a zombie.

The saddle came in handy, as there were a lot of horses in the fields not too far from the mansion.  A lot of horses.  I think they must have really upped the spawn rate for horses.

A few of the horses within sight of the mansion

I took the seeds and my one potato and started a farm to build up my food supply.  One potato became three, three became seven, and so on until I had a couple of rows growing.

The horse hanging about the farm

I also had to dig the usual mine, so I began to tunnel down to level 12 in order to start collecting iron, diamonds, and cobblestone for the next project.  The next project was, of course, setting up some sort of link to home.

I had dragged along 10 blocks of obsidian in order to make a nether portal.  My idea was to do what we did with Aaron in reverse.  I would portal into the nether, get up into the roof, and start a transit tunnel headed south for the main hub.  That seemed easy enough.  I just needed a bunch of cobblestone for a tower up into the roof.

So I built the portal in the foyer of the mansion, lit it, and stepped through carefully.  It came out on a flat outcropping of netherrack, high up, but not too high, over the usual lake of lava.  I build a building of cobblestone around it, leaving a hole in the roof to start my climbing tower.

The tower went along easily enough, my main problem being cobblestone supplies.  I had to go back and mine more in the world.  And then I got to the roof of the nether and began to feel a bit of anxiety.  I didn’t want to bore straight up through the netherrack, lest I hit a lava patch and have it pour straight down on me.  So I expanded my current platform a bit and tried digging at an angle, just to poke up into things.  I was at about level 95 and I only needed to get up to around 119 to be level with our transit hub.

And, of course, I hit a lava bubble.  It wasn’t bad.  It was pouring down the side of my tower, all I had to do was plug it up.

And I missed.  And missed again, and then panicked as the lava flowed towards me, then dropped into the tower and plugged the top to keep any lava from pouring straight down into my portal room.

So now I was in a bit of a fix, with lava pouring all over my work.  So I got myself up on the roof of the portal building and started building a repair tower to get myself high enough to re-route and plug the lava leak.

After a couple of false starts, I was doing well getting up the side when I heard the cry of a ghast, followed quickly by the sound of it launching a missile at me.  I had fought off a couple of them already, but I was standing in a precarious spot at that moment and its shot knocked me right into the lava flow.

I quickly jumped out and off the side tower, heading down into the portal room and through into the world, hoping to be able to jump into the little pond by my farm before I died.  I did not make it, and my gear was strewn about the foyer as I died.

On the plus side, my gear was safe and close to hand.  On the downside, all my levels had disappeared, and with them my ability to repair my diamond pick, which was already showing yellow on its wear bar.  Levels are used to repair things, and without them my having the iron for an anvil and diamonds to the repair job were not much good.

Still, I was at least together.  I got back up on the repair tower and eventually plugged the lava flow at its source, then finished more drive up into the roof of the nether.  I hollowed out a room and moved the portal up there, by which point my diamond pick was into the red for wear.

I took some time to ride around and see if I could scout a good overland horse path to the ocean, from which I could sail back to our explored area.  That still might be viable, but it will take some time.  It will still likely be quicker to tunnel through the nether to our transit hub and then lay rail.  It just looks like I might end up doing it with iron picks, which mine slower and wear out much more quickly.

So there I am, stuck far from home, building a new one and a road in between the two.