Asher told us we would be going on an old fashioned Reavers deployment, a chance for the veterans to relive the “good old days” and the new members to figure out just how rose colored our glasses really were when it came to said “good old days.”

We would be packing up ships with mobile depots and refits and reloads and plenty of nanite repair paste to mend our overheating woes and heading deep into hostile space to live in safe spots far from support or easy resupply.  We even got a new doctrine.

One of the fun bits of Reavers is Asher likes to try/fly different ships.  Of course, the downside is that I have ended up with a few ships sitting in my hangar with a fit we used just once.  Such is life.

This time around we were going out in the Sisters of EVE cruiser, the Stratios, beloved hull of Stunt and his Anime Masters.  On learning our main doctrine hull, I immediately made sure I had SKINs for it.  Oh, and I also bought a couple hulls in Jita lest the :goonrush: drive up the prices.

Once we got the fit, I bought all of that in Jita as well and flew the ship out to Delve to be ready to go.  There were some additional support ships on the list, including a Rapier.  I had an entosis Rapier left over from the Casino War which my alt could fly, so I updated the fit for that and was ready to go.

Then there was the wait for the go sign.  Asher wanted a wormhole to take us close to our as yet undisclosed destination.  Eventually the ping came, a fleet was formed, the ships were undocked, and we headed out for parts unknown.

Stratios fleet on the move

As we started out Asher followed tradition and asked us to put who we felt our target was in fleet chat.  Circle of Two was the easy winner and, sure enough, that was who we were heading out to pester, with the actual destination being the region of Impass.

As we went Asher explained the CO2’s layout in Impass and what our mission would be.

Impass is laid out with a single system choke point that protects four constellations.  That system is 68FT-6, which is where CO2 has made its capital system.  That system is also within capital jump range of most of the region.

On the far side of 68FT-6 are three constellations where CO2 does much of its ratting, noted in red circles above.  That was where we were headed with the intention of making CO2s ratters, to annoy CO2 in general, and to remind them that their betrayal has not slipped our mind.

We slipped past their capital system and into IRE-98, which was to become the rally point for our deployment.  From there we would form up to set gate camps, run entosis ops, and resupply.  When not doing ops as a group we were to camp their ratting systems to pick off the unwary, make the nervous dock up, and generally be pains in the ass when we could.  When we could not be online and active we were asked to safe up, cloak up, and stay logged on to the game in the traditional AFK camper move.  A hostile in system will send some people packing or make them log off rather than rat.

And finally, we were to follow the Reavers rule of never speaking in local.

When I got home I would go active to annoy the locals or join up with the standing fleet to do something that required coordination.  We did not do a lot of full group operations, but once in a while we would form up to be a menace in larger numbers. 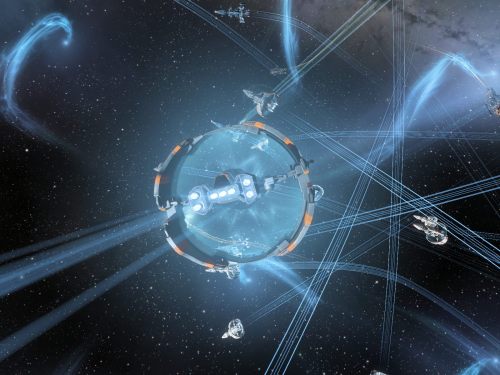 Stratios in all directions

In small groups we would pick on CO2’s mining Rorquals to get them to respond.  For example, Bruce Sparx managed to tackle a Rorqual and myself and RatKnight1 came along to help him. 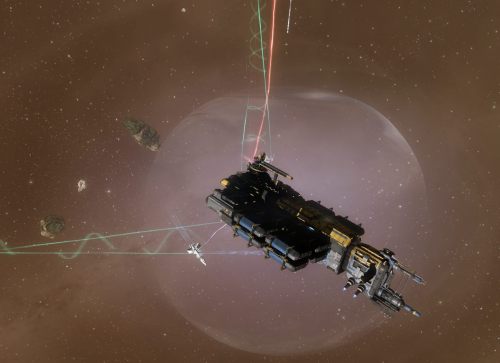 There was no way the three of us were going to be able to kill him.  Even neuting out his capacitor he was still able to run his shield booster often enough to hold his shields steady against us.  But it remained possible that more of us would show up, so CO2 had to send in a couple of interceptors then light a cyno to drop capitals on us. 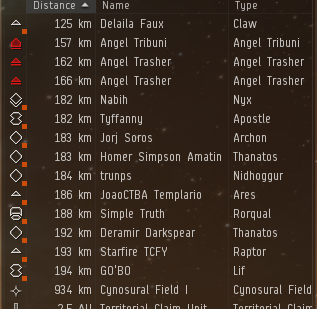 At that point we recalled drones, cloaked up, safed up, and let them have the field to themselves.  They rescued a Rorqual but didn’t get any kills with their overwhelming force.  We were still lurking out there.

Once in a while they would pick somebody off.  My alt lost his Rapier while trying to hold down a Rorqual when DBRB had a bomber op in the vicinity.  I would not have been so aggressive otherwise, but dead is dead either way.

When solo and without any ratters obviously about, I spent time hitting some of their many undefended towers in the region.  This causes an alert to pop up for people in the alliance.

Why yes, I will shoot this POS

I would sit and do that until somebody showed up to chase me away, at which point I would recall my drones, cloak up, and sit quietly.  Once they were gone I would decloak and pick up where I left off.  This got the occasional lecture or plea in local.

I hit one tower often enough that they came out and put a new defensive modules on it.  However, they didn’t seem to notice that the guns were anchored by not actually online.

When somebody decided to sit on a tower to keep me from hitting it, I went off and started hitting customs offices in the same system.

We didn’t stop people from ratting.  We had nothing close to the level of force to do that.  But we curtailed it some.  Asher was keeping stats on NPC kills in the systems, which were down noticeably.  The solo ratters went away or became very paranoid, unless they were ratting in super carriers, while others started ratting in groups to stay sage and keep ADMs high in their systems.  That was enough to keep almost all of their ratting systems at ADM 6.

With that state of affairs, I decided to bring my alt back in a covops frigate and learn how to use combat probes.  My alt is all level V on scanning skills.  I first fit out a Cheetah with a fit I found online that included a warp scrambler with the idea that I could scan something down and hold them in place with that, then warp my main in with the Stratios to finish them off. 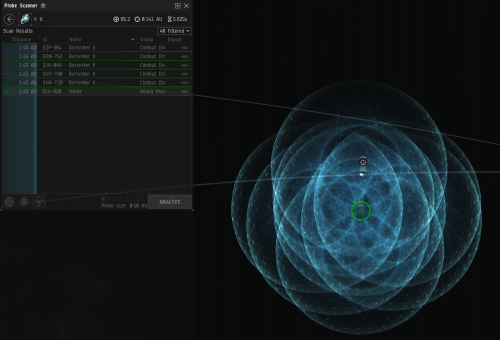 Combat probing was easy enough that I wondered why I hadn’t done it before.  The Cheetah was a bit fragile though and I lost it on a bait Epithal.  Live and learn and watch for bait.

So I dropped the idea of direct combat with him and instead came back with a Buzzard fit just to scan and cloak, with a covert cyno fit in case we were able to bring our black ops battleship into action and drop on somebody.

Combat probes are a wonderful way to scare people.  CO2 ratters seem to use their directional scan pretty regularly so when I scanned somebody down, unless they were in a carrier or a super or in a group, they would usually bolt.  However, on bolting, they would often leave things behind, things like drones and Mobile Tractor Units.

So I went into the clean up business, keeping CO2 ratting space tidy by eliminating stray drones and MTUs by scanning them down and popping them.

Stray drones actually turned into a resource for me as I would forget or lose drones now and again, so I could replenish them from strays.  I was just sad when NPCs would pop them before I could scoop them up.

MTUs though became my main target.  Easy to scan down, easy to kill, and they even provide a kill mail. 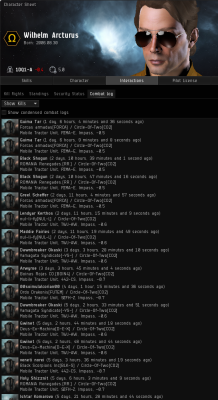 MTUs don’t cost a lot in the grand scheme of things, but once you pop one (and the wreck) you have deprived a ratter of some of his take, and every annoyance is a plus.  CO2 even obliged by calling me names in local.

That bit from local was amusing because while they did drop some bait MTUs, they were so eager to catch me that they bumbled the drop and I was able to recall drones and cloak up with plenty of time to spare.  So they took to local, during which I killed one of Black Shogun’s MTUs.  He was carrier ratting and dropping MTUs to pick up later after each anomaly, so I was popping them once he left. 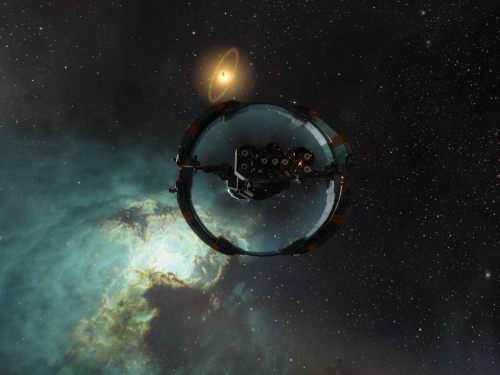 So that is what we spent our time doing for almost two weeks in Impass.  It was part of why GigX declared war on the Imperium, a war that really hasn’t seen much action after an initial spasm by CO2.

As a final gesture for the deployment, while CO2 was off helping TEST cover their Keepstar deployment on April Foos Day, we went out to entosis a bunch of systems in order to split their response.  The Keepstar went up uncontested while some scratch defense groups chased us around Impass.

After that we returned to Delve to repair and resupply, pulling out through another wormhole.  Repair was literally required for my Stratios.

I ended up taking some armor hits while annoying a ratting Nyx.  Fighters chew up subcaps, so some care needs to be taken if you’re moving around carriers of super carriers solo.

But the deployment was over and we were back home.

Now the key question remains; was it really an old school Reavers deployment?  Sure, we were in the enemies home territory unsupported, living in safe spots and refitting with mobile depots.  But we didn’t reinforce any towers, and structure shoots were a part of the old deployments, part of the “money in the bank” strategy of.

Then again, we were in the core of CO2s territory while they were home in force, rather than in some periphery while the enemy was deployed elsewhere.  Maybe not a complete recreation of some of the times from the first year of Reavers, but every deployment has its own nature.

Another set of tales for the book of Reavers.