During the EVE Online keynote at Fanfest 2017 CCP Seagull announced the winners of the CSM 12 election.  As noted previously, the CSM was reduced to ten members and all members will travel to CCP for summits. 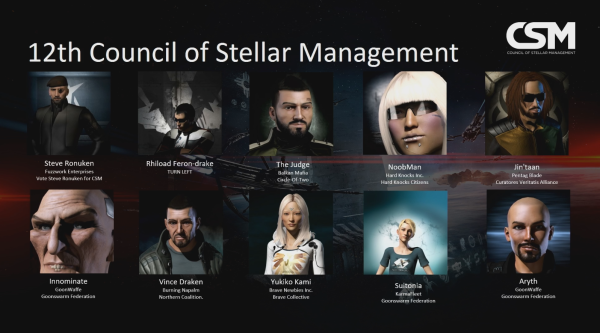 Six of the winners were carry-overs from CSM11.

Once again, null sec candidates make up the majority of the council, though now they represent a smaller percentage now that the council is smaller and a low sec candidate, Rhiload Feron-drake, made the cut.

While the trend was up, it was still nowhere near the peak of 59,109 votes cast for CSM 7.

There will no doubt be a dev blog to follow this up with details and the actual vote count.  Then we can figure out how close Xenuria came to re-election.

As noted in the monthly review posts, I have kept going with Pokemon Go so far.  I started the game late and haven’t been the most active player, but I have managed to make progress, hitting level 27 last month and I still enjoy bringing up the app daily.

My continued progress… and my still playing at all… is probably related to the fact that there are six Pokestops in a 600m loop at the campus at which I work and three Pokestops easy walking distance from our home.  That, the daily bonus and weekly streak bonus, along with the various events have kept me playing and helped me get as far as I have.

That I am still playing isn’t to say that I am doing well.  My top combat power Pokemon are not exactly a majestic sight.

But their mediocre combat power hasn’t really been a problem.  When I go off to do a gym battle I have always been able to make progress.  The game was set up so that even a modest group of Pokemon could challenge the inevitable 3K CP Snorlax at the top of the local gym.

You might use up five of your six Pokemon bringing him down, but so long as you had a couple of effective Pokemon and a large supply of heal potions and revives, no gym was unassailable.

And then came the second generation Pokemon and Blissey. 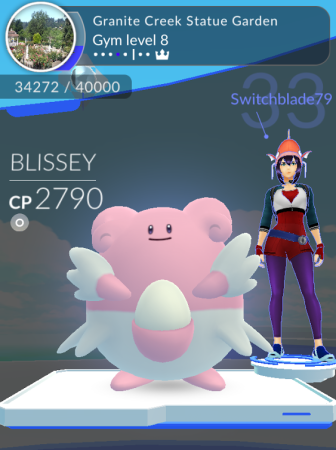 I first ran into a 3K CP Blissey after dropping my daughter off at rehearsal for the school production of Leader of the Pack.  I rolled up the street from the school to a level 3 gym, parked, and thought I would take it down.  I like to earn some coins now and then so I can buy a lucky egg and go on an evolve binge.  That is generally how I level up.

The Gydrados and the Snorlax in the gym were doable, but every time I went after the Blissey, I could make no progress.  It wasn’t killing my Pokemon and I managed to put together a team whose attacks were all super effective.  The Blissey just sat there and absorbed all my attacks, its health bar barely moving, until the 90 second battle timer ran down and I lost by default.

I couldn’t take it down.  The best I did was about half way before time ran out.

And I haven’t figured out a winning approach with my current collection of Pokemon.

So the game went from any gym being assailable if I had the time and patience and medical supplies to sustain an attack to simply having to pass on any gym with a Blissey of 3K CP or so.  My wife, who is level 30 and has better Pokemon than I, has the same problem.

We might have to go from concentrating on breadth of Pokemon caught and levels to pumping up the combat power of some of our Pokemon.