And, as usual, the term “free to play” has certain restrictions.

StaCraft II is not free and neither will the upcoming 4K remaster of StarCraft, which Blizzard confirmed a while back, be free.

But the original StarCraft, along with the essential StarCraft: Brood War expansion, those are now available to play without giving Blizzard any money at all.  You too can play the 19 year old classic game that pretty much became the national sport of South Korea and which pretty much made esports a thing in all of its 1998 technical glory. 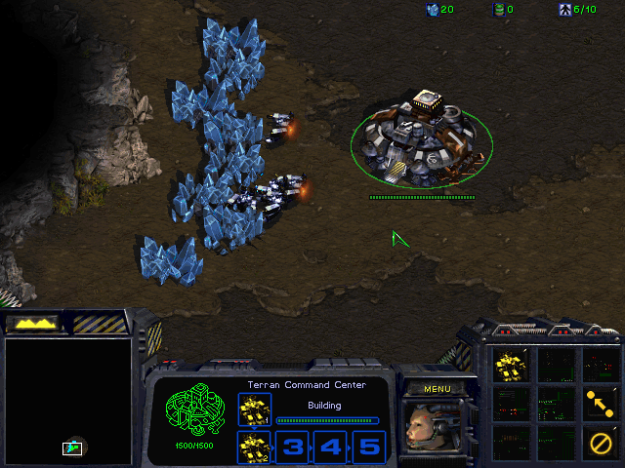 That screen shot is a full size grab of the actual resolution supported by the game; 640×480. In 2017 the full StarCraft screen fits in a window within a window on your monitor.

Yes, the game will scale up to your monitor, but even back in 1998 I had a 19″ multi-sync CRT monitor that supported double that resolution and remained crisp and readable (at least to my 1998 eyes), so jumping to the smaller resolution made everything… big.  Likewise, playing it on my now twelve year old 20″ LCD monitor, which supports 1600×1200 as its native resolution, makes everything seem very big as the game scales up to 2.5x to fill the screen.

And I have an archaic old monitor with a 4:3 aspect ratio.  I am not sure what happens if you try it at the now more common 16:9 ratio.

But at least it was fast.  It is all sprites, with no 3D rendering required, and doesn’t need to move that many pixels around, which is one of the reasons it became an after hours game of choice at the office back when most of us still had 200MHz Pentium Pro processor based machines with basic Matrox or S3 graphics cards.  The game ran like a champ with those specs, even with a mass of units on screen.

Blizzard even threw in a few fixes and updates according to the 1.1.8 patch notes.  Links to download the game are in the patch notes as well.

I don’t really need to download the game as I have the CDs sitting around somewhere… probably two sets… but it is likely easier.  The installer is tiny.

In the mean time, Blizzard has been showing off what the art for the upcoming 4K remastered version… which, again, you will have to buy separately… will look like.  It is sort of like everything is coming into focus.  I am still waiting to see what the price will be for the remastered version and whether or not it will be accepted by the still thriving StarCraft community and whether or not having the classic units and game play in high definition… along with LAN support… will scavenge players from StarCraft II.

Of course, some minor irony clings to this remaster effort.  While the World of Warcraft team says they can’t do a classic server and that it would be bad and that nobody would want one anyway, other parts of Blizzard are actively mining the power of nostalgia.